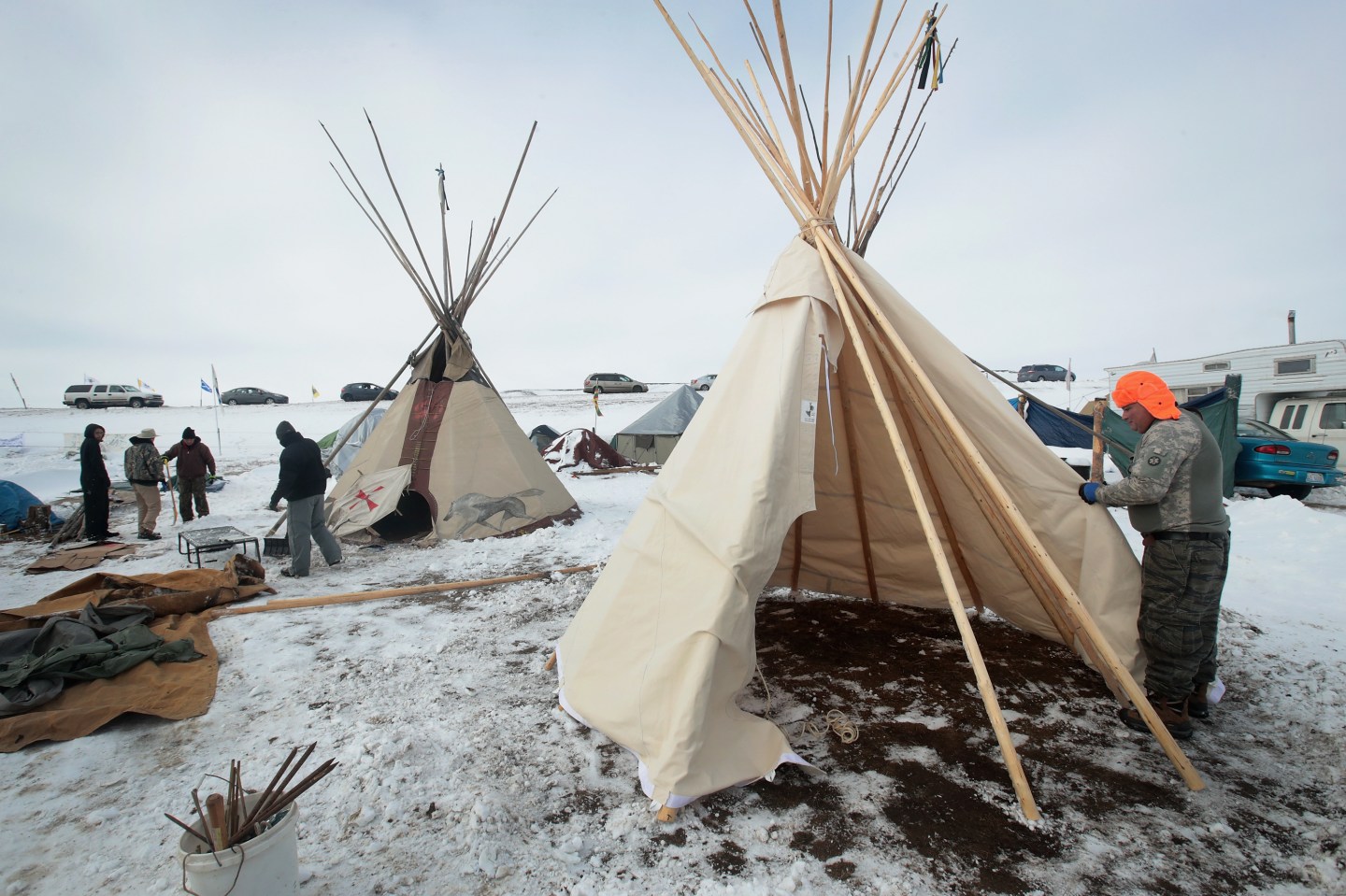 CANNON BALL, ND - DECEMBER 02: Hawk Laughing, a Mohawk originally from northern New York, helps to build a tipi at Oceti Sakowin Camp on the edge of the Standing Rock Sioux Reservation on December 2, 2016 outside Cannon Ball, North Dakota. Native Americans and activists from around the country have been gathering at the camp for several months trying to halt the construction of the Dakota Access Pipeline. The proposed 1,172-mile-long pipeline would transport oil from the North Dakota Bakken region through South Dakota, Iowa and into Illinois. (Photo by Scott Olson/Getty Images)
Scott Olson Getty Images

In North Dakota, winter is most definitely coming.

That does not deter Dakota Access Pipeline protesters, many of whom say they know a blizzard earlier this week was but a taste of what is to come, as temperatures are expected to fall toward 0 degrees Fahrenheit (-18°C).

Rather than retreat amidst the cold and an order from the U.S. Army Corps of Engineers to vacate by Monday, the Oceti Sakowin camp, the epicenter of pipeline opposition, is growing in size—and quickly winterizing in expectation of harsher weather.

Dozens of insulated tipis have popped up in recent weeks, adding to those that have dotted these barren plains since last summer. Yurts, a round tent popular in the cold tundra of East Asia, have started appearing. Portable toilets are being swapped out for heated, composting commodes. Ice cleats, which strap onto boots to give stability on ice, are now in demand.

Taylor Orpin, 23, quit her job to move to the camp last month. She spends her days collating donated coats by size and gender in a tent near the camp’s main fire circle.

“I’m very aware of what true cold is going to feel like,” said Orpin, a native of Winnipeg, Manitoba. “Here, people are able to come in and just take whatever they need to stay warm.”

Thousands of people, led by the Standing Rock Sioux tribe, are protesting the pipeline, which would carry crude oil from North Dakota to Illinois en route to the Gulf of Mexico.

The route is adjacent to the Standing Rock reservation, and the tribe and climate activists say the line risks contamination of the tribe’s water source and its construction has damaged, and would further damage, sacred sites.

While clothing, food and money have been pouring in from all over the world, the camp’s website requests more donations of wood, blankets, winter sleeping bags and propane to help weather the winter.

A division of labor keeps many active, with campers volunteering in the four kitchens, shoveling snow, building tents and doing myriad other tasks.

U.S. Veterans to Meet with Tribe Elders in Pipeline Protest

The multitudes at the camp defy the predictions of state and local officials, many of whom said out-of-state protesters would flee south like migrating birds. Children can be seen sliding playfully down nearby hills while senior citizens gossip over fire pits.

North Dakota Governor Jack Dalrymple issued an evacuation order for the camp earlier this week, citing the weather. That followed the Army Corps’ earlier decree to vacate the camp, which is on federal land, by Monday. The state is not going to enforce that order, and voluntary compliance doesn’t look likely.

“I have zero experience with the cold,” said Jess Weiner, 29, of Los Angeles, who arrived Thursday. “But I love the adrenaline of being here.”

It’s not clear how much money has been raised to build and sustain the camp since it was founded last spring, but estimates stand in the millions of dollars. The protests started attracting more attention in the late summer, particularly after clashes between activists and private security hired by Energy Transfer Partners, which is building the line.

The Obama Administration has twice delayed approval for ETP to tunnel the pipeline under the Missouri River. This one-mile stretch is the last unfinished spot on the line in North Dakota.

The Three Affiliated Tribes of the MHA Nation, another large American Indian tribe in North Dakota, earlier this fall funded portable toilets, food and garbage removal. Even though they have earned billions from the extraction of oil and gas from their lands, the MHA have supported the Standing Rock protest.

U.S. postal locations in nearby Bismarck and Fort Yates have been engulfed with donated packages. Three UPS delivery locations in Bismarck have processed more than 5,000 packages in recent weeks. A UPS spokesman said the number well exceeds what is usual for the area.

Financial support, including more than $500,000 alone for a veterans rally this weekend at the camp, have been pouring in through GoFundMe and other crowdfunding websites.

Beyond donations, Hollywood actors like Shailene Woodley and Susan Sarandon have visited North Dakota, though they are not currently at the camp.

Some campers bring technical skills. Joshua Tree, 42, has helped install solar panels and wind turbines to power a white, dome-like structure that dwarfs everything else here. The dome, which organizers say can hold 380 people, is where most meetings and press events are held.

“We wanted to help the best way we can. And that’s setting up solar power and wind power,” said Tree.

As the group tries to ward off the cold, challenges loom. One family had to be hospitalized on Thursday due to carbon monoxide poisoning after attempting to heat a tent using propane without proper ventilation. That feeds concern from law enforcement that protesters don’t respect the weather.

“These are people who don’t yet understand what cold is,” Wayne Stenehjem, North Dakota’s attorney general, told Reuters.

Signs posted around the camp note there are 18 different communal sleeping areas that are warmer than personal tents.

“We cannot stress how cold it’s going to get,” the posting reads. “Don’t be in a small tent or your car and think you’ll be OK. Let’s all look after each other.”