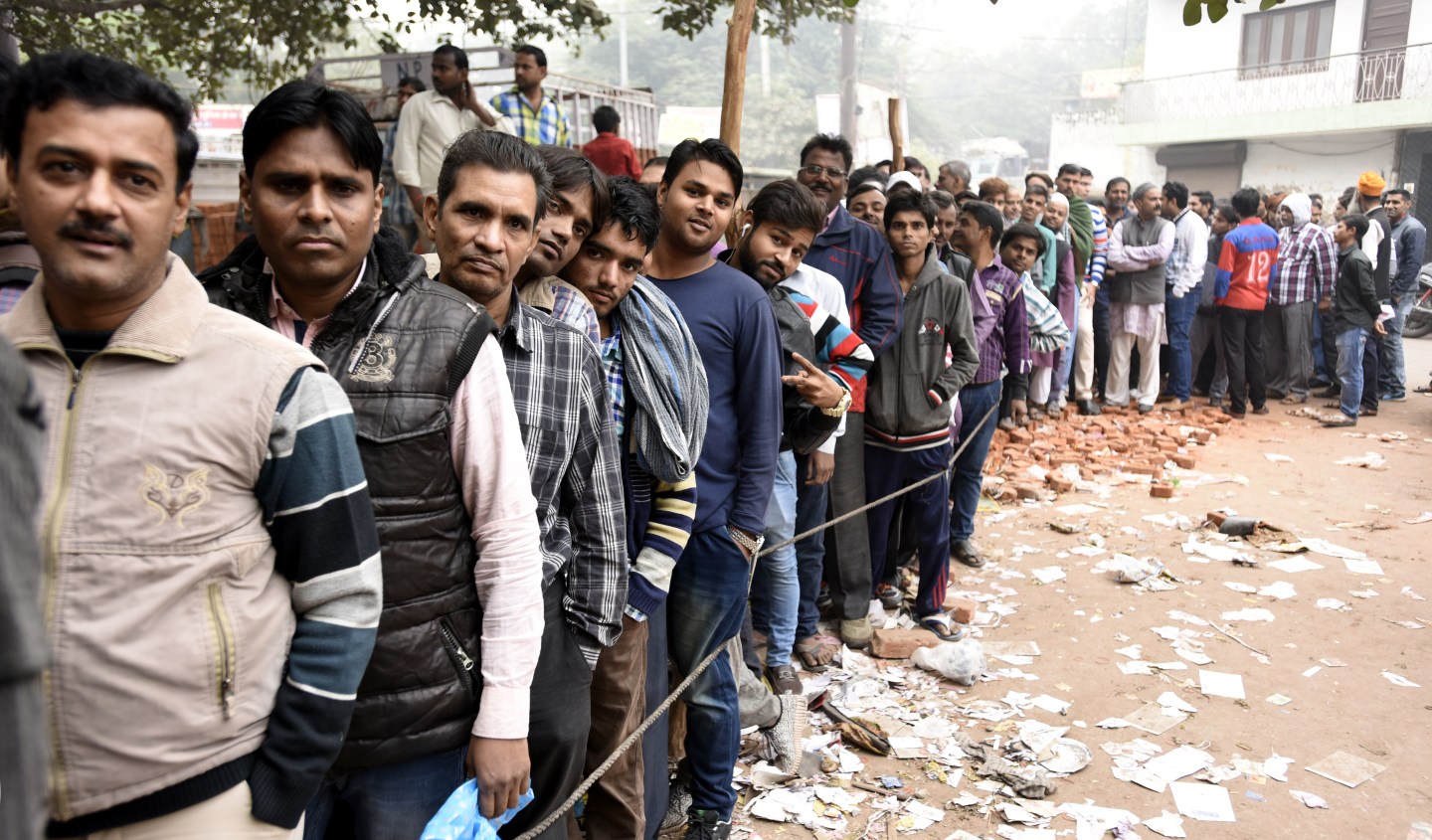 NEW DELHI, INDIA - NOVEMBER 30: People wait outside a Bank of India at Jheel chowk branch, people wait in a long queue to deposit and withdraw new currency notes on November 30, 2016 in New Delhi, India.Even as currency supply to several banks was replenished, the majority of banks are pinning hopes on the Reserve Bank of India (RBI) to continue improved supply of notes so that they can cater to their customers during pay days usually first 10 days of a month. Demand for cash continued to be higher than the supply resulting in long queues. (Photo by Sonu Mehta/Hindustan Times via Getty Images)
Sonu Mehta/Hindustan Times via Getty Images

Angry mobs are locking in bankers and insulting staff as India’s banks fail to cope with Indian Prime Minister Narendra Modi’s purge on the 500 rupee and 1,000 rupee notes.

“Already people who are frustrated are locking branches from outside in Uttar Pradesh, Bihar and Tamil Nadu and abusing staff as enough cash is not available,” CH Venkatachalam, general secretary of the All India Bank Employees’ Association, told Bloomberg.

Bankers are warning that the large number of withdrawals are causing branches to run out of money.

The Indian prime minister made a surprise announcement on Nov. 8 that the aforementioned notes, which account for more than 80% of currency in circulation in India, would be rendered useless, in order to curb India’s black market.

Since then, countless Indians have lined up around the country to exchange their defunct notes, spending hours and sometimes even paying someone to stand in the queues on their behalf.

By some estimates, besides the fallout from frustrated citizens, the cash squeeze may also have negative consequences for India’s GDP.

“Consumption, the main growth driver of the economy, will likely be the biggest casualty in the months ahead as demonetization takes its toll on overall consumption, especially in rural areas,” said Société Générale economist Kunal Kumar Kundu, in a note quoted in CNBC.

Yet, as India gets rid of major cash currencies, India’s digital wallet companies have seen an uptick in use. According to Bloomberg, Paytm, India’s largest digital wallet firm, saw nearly a doubling in use of its online recharge services.

“With payday around the corner a lot of small and medium-sized companies are opting for prepaid cards over cash payments,” Naveen Surya, managing director of payments solutions company Itz Cash Card, told Bloomberg.

Meanwhile, higher-ups at Laxmi Vilas Bank are also thinking about payday. “We are bracing ourselves for payday and fearing the worst,” said CEO Parthasarathi Mukherjee. “If we run out of cash we will have to approach the Reserve Bank of India for more. It is tough.”