Trump’s Treasury Pick Says U.S. Should Get Out of Freddie Mac and Fannie Mae 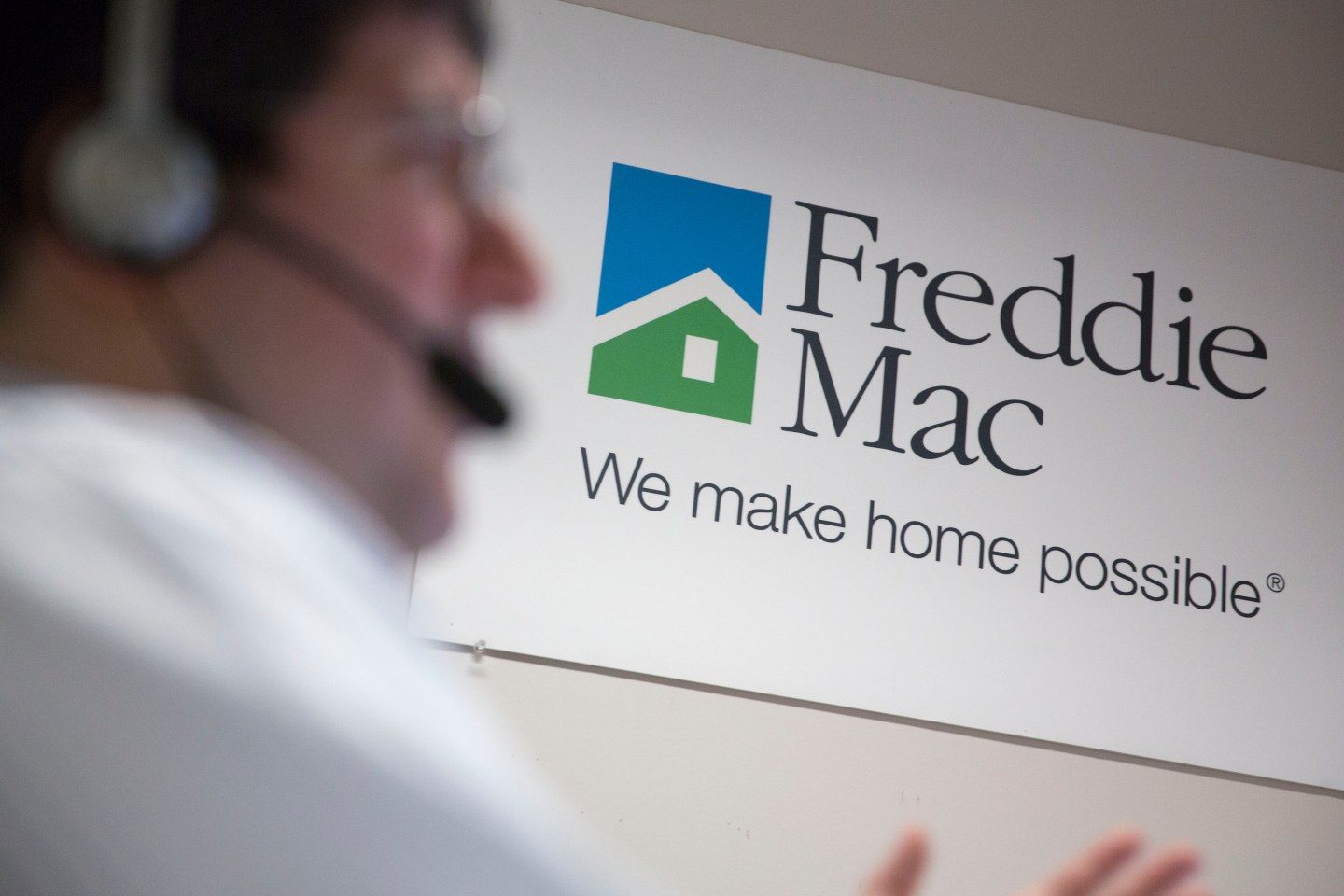 A Freddie Mac sign hangs behind employee John Estrada as he works in the borrower contact unit area at Freddie headquarters in McLean, Virginia, U.S., on Tuesday, April 8, 2014. Senator Sherrod Brown, an Ohio Democrat and a member of the Senate Banking Committee, said a bipartisan bill to replace Fannie Mae and Freddie Mac is too complicated and doesn't do enough to address too-big-to-fail concerns or provide assistance for affordable housing. The panel will consider the measure on April 29. Photographer: Andrew Harrer/Bloomberg via Getty Images
Photograph by Getty Images

U.S. President-elect Trump’s nominee for Treasury Secretary, Steven Mnuchin, on Wednesday waded into the long-running battle over the future control of Fannie Mae and Freddie Mac, the largest players in the U.S. home mortgage market, saying that the lenders should be returned to private control.

Fannie and Freddie stood at the center of the 2008 financial crisis. When the U.S. housing market collapsed beginning in 2006, it crippled their finances and forced a taxpayer-financed rescue totaling $188 billion to help thwart the disintegration of the U.S. financial system.

The Obama administration has argued for the past eight years that Congress should pass legislation to reform the housing-finance system but repeated efforts since the 2008 crisis to reform the two lenders and cut their ties to the federal government have foundered.

On Wednesday, Trump’s pick for Treasury secretary said extracting Fannie (FNMA) and Freddie (FMCC) from government control would rank as a “top 10” priority for the next administration.

Since they were rescued in 2008, both lenders have operated under the “conservatorship” of the U.S. Treasury but both are now profitable again and have returned more than $240 billion to federal government coffers.

The two so-called government-sponsored enterprises, or GSEs, help the U.S. housing finance market by buying the mortgage loans made by banks, freeing up space on lenders’ balance sheets to generate more loans.

Fannie and Freddie bundle those loans into marketable debt securities, highly prized by global investors because they enjoy an effective guarantee against default from the U.S. government.

In turn, that keeps American mortgage rates low and allows borrowers to finance homes at fixed rates for as long as 30 years, a unique feature of the U.S. housing market.

Any significant change to that special guarantee relationship could send U.S. home financing costs higher, or even lead to the elimination of some products like the 30-year fixed-rate loan.

But the government backing also allows Fannie and Freddie to tap global debt markets at rates far below other private borrowers and are seen as crowding out private lending in the mortgage market while raising the risk to the government of future defaults.

On Tuesday, Mnuchin said he planned to eliminate government control of the companies but offered few details.

While the incoming Trump administration could tinker with Fannie and Freddie policies, reforming the agencies would take an act of Congress.

“We’ll make sure that when they’re restructured, they’re absolutely safe and they don’t get taken over again,” said Mnuchin, a former Goldman Sachs banker.

Without a secondary market, mortgage interest rates would be unnecessarily higher and unaffordable for many Americans, a spokesman for the National Association of Realtors said on Tuesday.

Market participants were skeptical a full separation from the government was in the offing.

“People don’t expect the government to just step away from the GSEs,” said Larry Milstein, head of government and agency trading at R.W. Pressprich & Co in New York.

The federal government has controlled both Fannie and Freddie since 2008 and the U.S. Treasury has warrants that give it the right to a 79.9% ownership stake but has not exercised those warrants.

So both lenders’ shares are still publicly traded and backed by some prominent investors who have advocated for their return to private control.

Mutual fund Fidelity, along with Bill Ackman’s Pershing Square, and the Fairholme Funds, run by Bruce Berkowitz, are major shareholders.

Both Fairholme and Ackman have lawsuits outstanding over governments control of Fannie and Freddie.