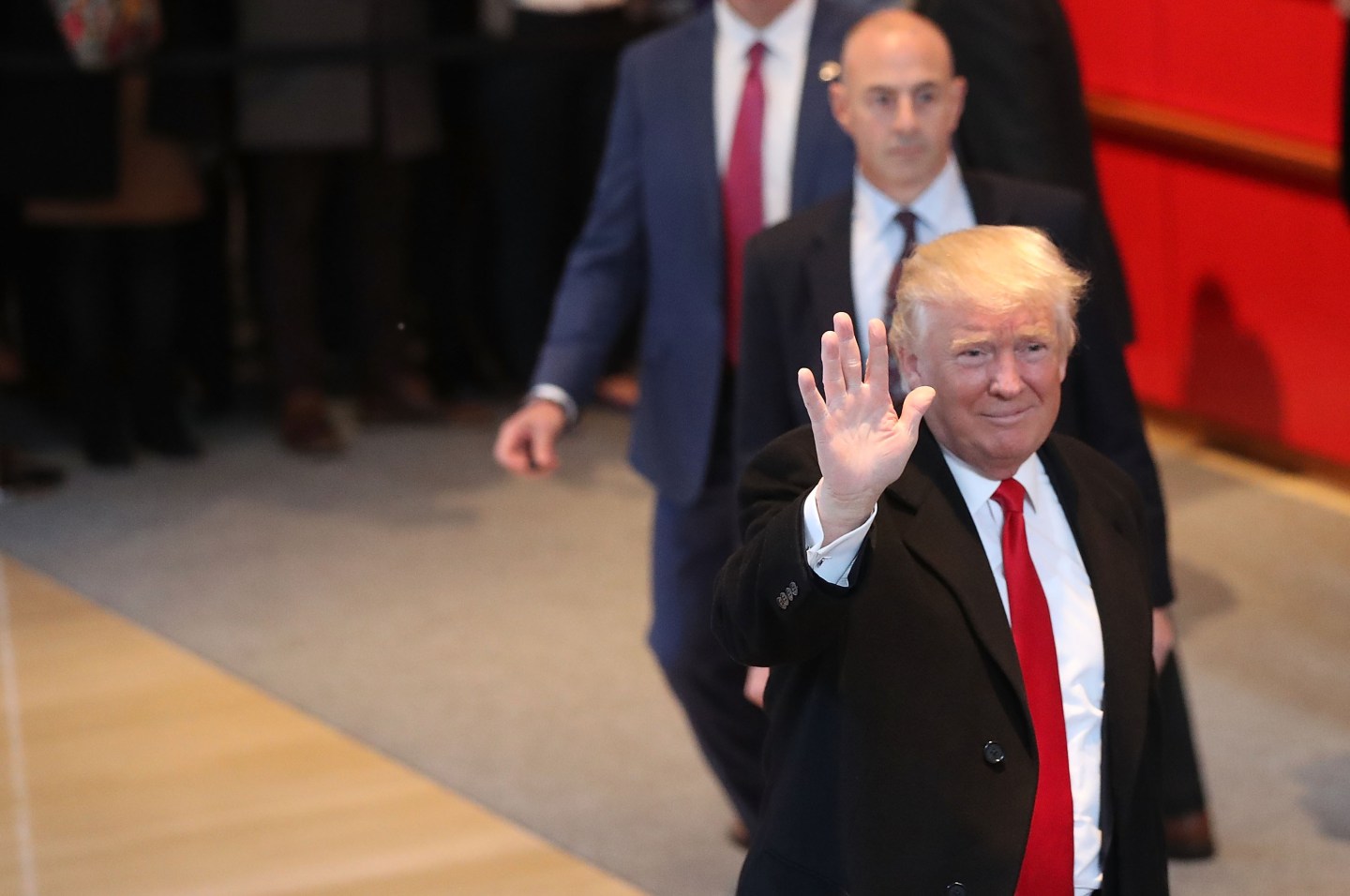 NEW YORK, NY - NOVEMBER 22: President-elect Donald Trump walks through the lobby of the New York Times following a meeting with editors at the paper on November 22, 2016 in New York City. Trump, who has held meetings with media executives over the last few days, has often had a tense relationship with many mainstream media outlets. (Photo by Spencer Platt/Getty Images)
Photograph by Spencer Platt—Getty Images

Donald Trump’s tax repatriation plan will create jobs, but far more—and more likely—ones for financial engineers rather than real ones.

The U.S. overseas funds that do find their way home in reaction to any holiday or tax rate reduction will mostly be used to boost financial engineering schemes like share buybacks, rather than funding expanded capacity.

That will be good for U.S. stocks, at least if investors’ Pavlovian response to buy-back announcements persists, but may do little for economic growth, jobs or longer-term corporate prospects.

While that could set up substantial repatriation of corporations’ $2.6 trillion held overseas, both history and logic indicate that the lion’s share will be used to flatter per-share earnings by buying back shares rather than to grow top-line revenues.

For one thing, the dollar has risen already and should rise further as expansionary Trump policy stokes inflation and both allows and forces the Federal Reserve to boost interest rates.

“Corporate profits on overseas operations will be reduced, but with demand weak and current profits under downward pressure, the repatriated earnings are likely to go into financial rather than physical investment,” Van Hoisington and Lacy Hunt of Hoisington Investment Management wrote in a note to investors.

Goldman Sachs (GS) is projecting that S&P 500 companies will bring back $200 billion of the $1 trillion in cash they hold outside the United States and use $150 billion for share buybacks.

With annual buybacks among S&P 500 firms running at a $592 billion annual clip through the second quarter, that’s a big bump and one the market will greet with enthusiasm.

That’s especially true given that the pace of buybacks has been slowing. Second-quarter buybacks among S&P 500 firms were down 6.8% from the same period the previous year. Earnings rose by 3% in the third quarter, according to FactSet, the first such rise in six quarters.

On the margins, the repatriation might crimp some bond market issuance, as many firms have borrowed in U.S. markets in order to fund buybacks without having to resort to repatriating cash at prohibitive tax rates.

We have seen this movie before.

The George W. Bush administration in 2003 passed the Homeland Investment Act, a one-year holiday on repatriations, which “required” that all funds brought back be used for job-creating investments. Plenty of money flew home—$300 million in 2005, the year it took effect. But little of that was actually invested.

A 2010 study by academics at Harvard University, the University of Chicago and the Massachusetts Institute of Technology estimated that for every $1 that came back, there was an increase in shareholder payouts of between 60 and 92 cents. Most of the payout increase was in the form of share buybacks, according to the study; of every $1 repatriated, buybacks increased by 79 cents.

Money is, after all, fungible, and a dollar brought home and “invested” can simply offset planned investment of dollars already here.

What is much less clear is the wisdom of the common practice of preferring share buybacks to either dividends or investment. Buybacks are handy for corporate insiders in that they mask the impact on earnings of the massive and ongoing dilution of shareholders by the issuance of shares as compensation. Yet they do exactly nothing to improve a company’s product offering, its market position or its longer-term prospects.

Over the very long term, dividend yields and growth are perhaps the prime determinant of equity returns, according to work done by James Montier, a member of the asset allocation committee at fund managers GMO.

Taking U.S. equity market data since 1871, Montier found in 2011 that on a one-year time horizon, almost 80% of the return has been driven by changes in valuation. However, on a five-year view, 80% of returns are actually generated by dividend yields and by dividend growth.

Taken over the very long term, the importance of dividends and dividend growth has been even more striking, driving about 90 percent of total returns.

At some point investors will lose faith in buybacks, but I am guessing it won’t be during the first year or two of the Trump administration.