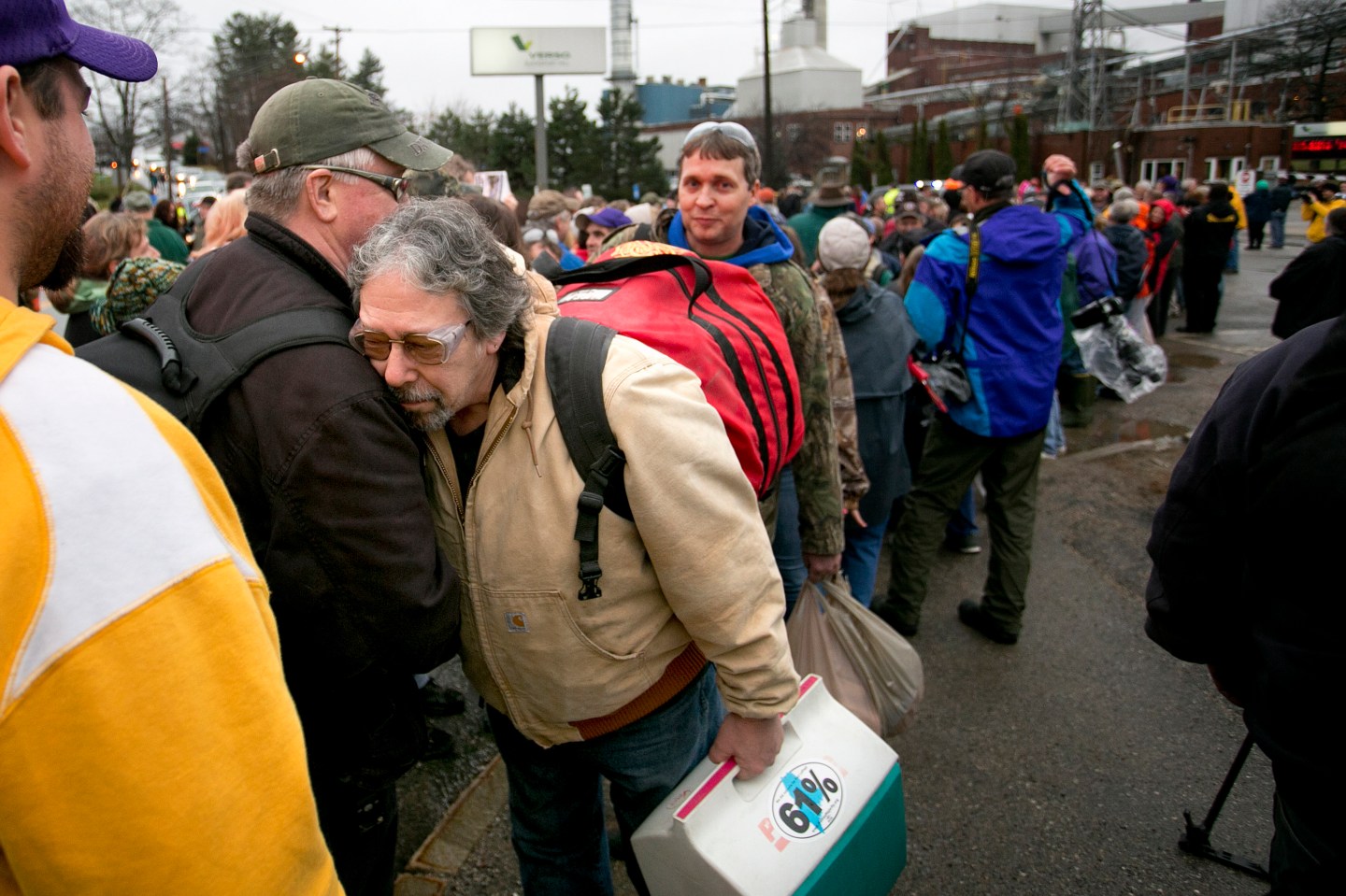 BUCKSPORT, ME - DECEMBER 17: Stephen Bowden hugs Bob Hatch, both of Bucksport, after they worked their final shift at the Bucksport paper mill Wednesday, December 17, 2014. Hundreds of community members gathered and cheered for the workers who filed out at 3 pm. The machines shut down a couple weeks ago and the mill has been silent as workers cleaned it and prepared it for sale. Parent company Verso Paper has a deal in place to sell the facility for $60 to American Iron & Metal. (Photo by Gabe Souza/Portland Press Herald via Getty Images)
Portland Press Herald Press Herald via Getty Images

A new study has drawn an apparent connection between a rise in mortality among middle-aged white American men and increased trade with China.

Their research was inspired by an earlier study that showed that while mortality rates among all ethnic groups were improving, those among whites were worsening at a startling rate.

Between 1999 and 2014, death rates in the 45 to 54 year-old demographic increased by 134 deaths per 100,000 people. “Only H.I.V./AIDS in contemporary times has done anything like this,” said Nobel-laureate Angus Deaton, who co-authored that study with Princeton economist Anne Case.

They discovered that the rise in mortality was due to unprecedented increases in suicide and drug overdoses.

“The thing about that paper that we noticed was that the trend started in 2000, when you see a big jump in U.S. imports from China and a huge loss in manufacturing jobs,” Schott told the Journal.

Areas where there was heavy manufacturing were most affected. But even those areas with merely average levels of trade competition with China saw suicide increases of 3.5% and a 24% leap in the numbers of overdoses for the demographic.

The issue of foreign trade taking U.S. jobs was a major element of Donald Trump’s campaign, which promised to bring back jobs and roll back economic ties with China.

In his first 100 days outline, released on social media last week, one of Donald Trump’s plans was to “negotiate fair bilateral trade deals that bring jobs and industry onto American shores.” He promised that Obama’s legacy Trans Pacific Partnership deal, which has not yet been ratified, will be the first thing to go when he takes over the White House on January 20, 2017.

For more on U.S.—China relations, watch this Fortune video:

“Whether it’s producing steel, building cars, or curing disease, I want the next generation of production and innovation to happen right here,” Trump has said.

However, Schott did not recommend ceasing to liberalize global trade, telling the Journal that such a move “hurts everyone. We want the increases in productivity and reductions in prices that trade brings.”

Instead, his recommendations emphasize more training for disenfranchised workers, with a focus on helping them move into growing areas of the economy.

Schott also pointed out that increased trade with China could improve people’s lives by bringing cheaper (and therefore increased) access to goods and services across the board, from healthcare to tangible everyday items.