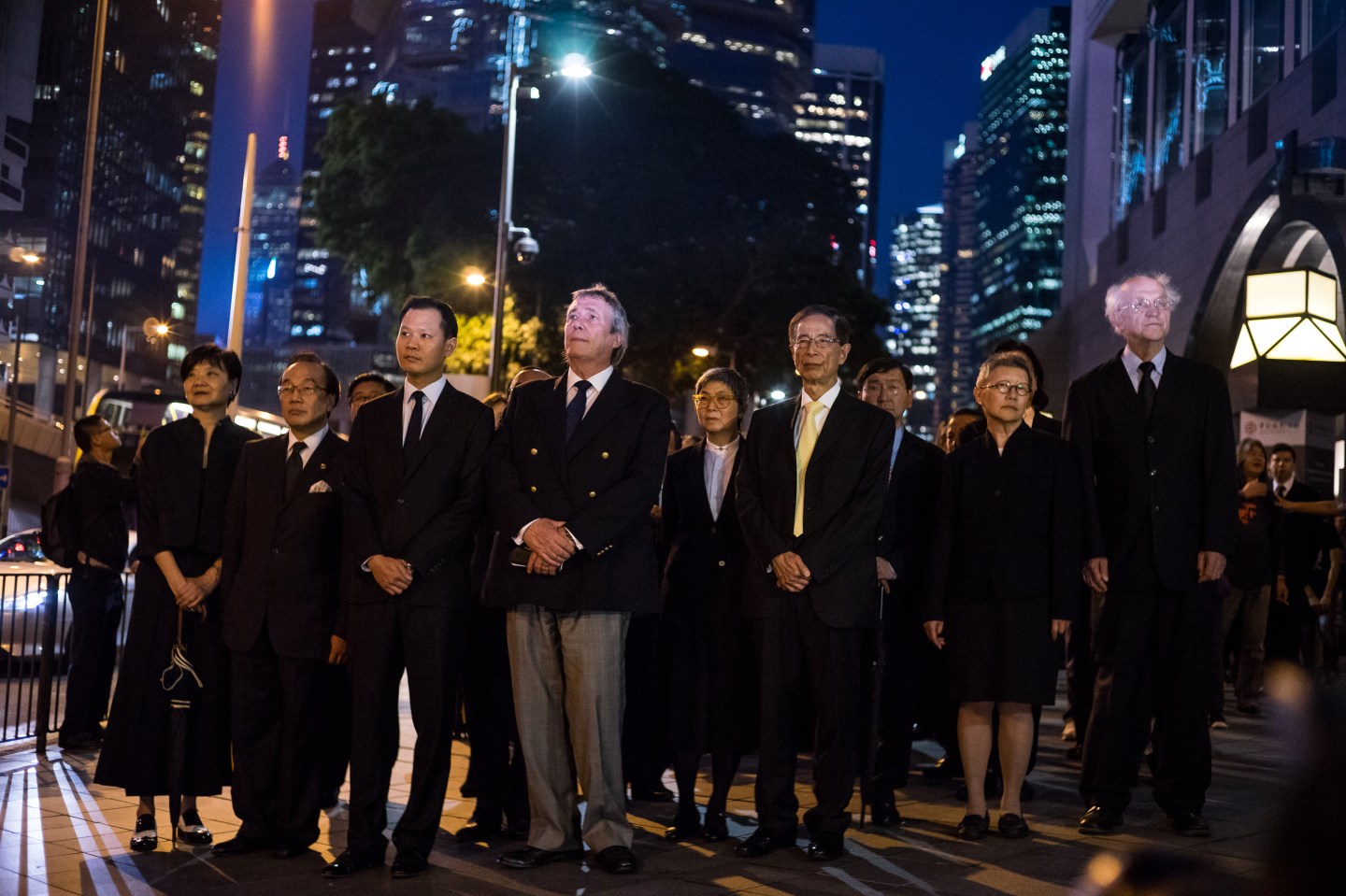 About 3000 lawyers in Hong Kong, dressed in black and marching in silence paraded and protested against interference from China in the ongoing saga of two pro-independence legislators, Nov. 8, 2016.
Pacific Press LightRocket via Getty Images

Hong Kong has seen its fair share of noisy protests and boisterous rallies in recent years — most notably the massive pro-democracy protests known as the Umbrella Revolution, which saw thousands of people occupy key commercial and government districts for 79 days in late 2014.

The latest march that took place, though, was unusual: no banners, no slogans, and hardly a sound. It was held Tuesday evening local time by at least 1,700 members of the legal profession, who, dressed in black, made the kilometer-long walk from from the territory’s High Court to the Court of Final Appeal in dignified silence.

They turned out to protest China’s decision to interpret a clause of the territory’s mini-constitution — known as the Basic Law — that applies to the inauguration of legislators. The ruling will almost certainly prevent two pro-independence lawmakers from taking their seats in the local legislature after a weeks-long political crisis.

The saga began on Oct. 12, when Yau Wai-ching, 25, and Sixtus “Baggio” Leung, 30 — who were both elected to the territory’s Legislative Council in September on a wave of separatist sentiment — attempted to take their oaths of office. Ignoring the script, they pledged allegiance to the “Hong Kong Nation” instead of the “Hong Kong Special Administrative Region of the People’s Republic of China” as legally required. They also referred to China as “Shina” — a Japanese name for China deemed highly offensive following its use as a wartime epithet. Their actions triggered weeks of angry reaction from pro-China forces in Hong Kong, and eventually from the Chinese state itself.

On Monday, the Standing Committee of China’s top legislative body — the rubber stamp National People’s Congress — interpreted provisions in the Basic Law as meaning that legislators would be disqualified if they intentionally read “an oath inconsistent with the legally prescribed oath,” or took the oath in a way that was “not truthful and not serious.”

Beijing’s intervention — which came at the invitation of the deeply unpopular administration of Chief Executive Leung Chun-ying — has provoked fury among many Hongkongers, who see that matter as something that the semi-autonomous territory should be able to decide upon for itself. On Nov. 6, police had to use pepper spray and batons to subdue thousands of protesters who had marched on the local headquarters of the the Chinese government to vent their fury. Their fear is that a dangerous precedent has been set, and that in the future China will use similar constitutional interpretations to repress democratic and pro-independence forces in Hong Kong.

“The specificity of this ‘interpretation’ shows that this is anything but an ‘interpretation’,” Alvin Cheung, an affiliated researcher at New York University’s US-Asia Law Institute, tells Fortune by email. “It is an attempt to supplant local legislation,” which is out of the Standing Committee’s interpretive powers, he adds.

Audrey Eu, a former chair of the Hong Kong Bar Association and a former pro-democracy legislator, warned “Every time you use a sledgehammer against [a foundation], even if it’s a rock-solid foundation, you are undermining it.” She tells Fortune: “My worry is that judges, in the end of the day, are human beings. If you keep putting pressure on them, attacking judges and lawyers and the rule of law, eventually things do change.”

Others share her concern for the future of the territory’s rule of law — long a plus-factor distinguishing the orderly business hub from the rest of freewheeling China.

“Business leaders will be watching to see if Hong Kong autonomy and rule of law are to survive. This is clearly not encouraging in that regard,” stated Michael Davis, a longtime law professor recently retired from the University of Hong Kong, in an email to Fortune. “Without [rule of law], business investors from abroad could just run around Hong Kong.”

For more on law in China, see Fortune’s video:

Adds Cheung: “The smart money will begin to consider alternatives to Hong Kong, if it hasn’t done so already … the protections that Hong Kong’s legal systems offer begin to look much more contingent if the underlying disputes involve state interests in any way.“