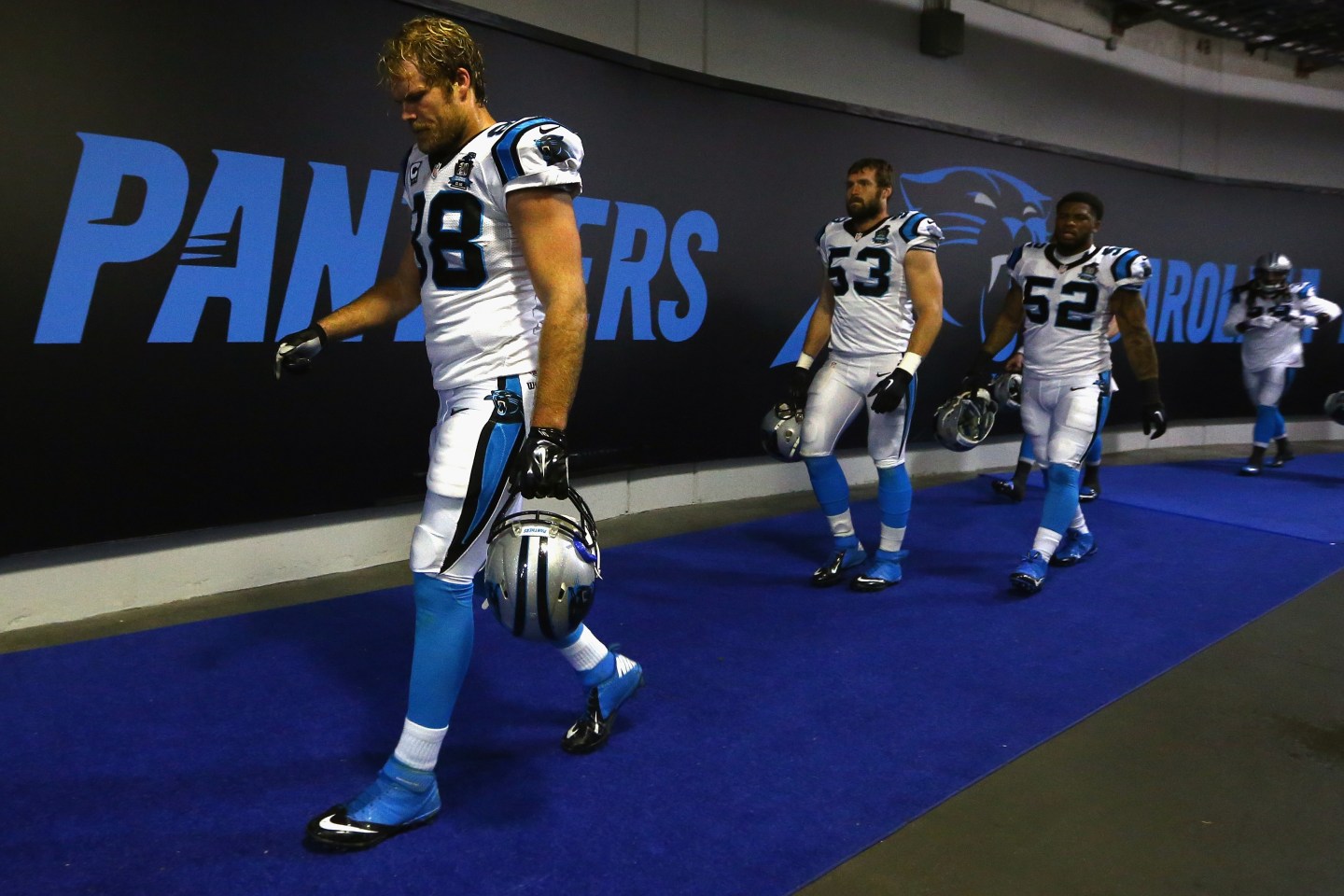 There are 63 players that occupy the Carolina Panthers locker room at Bank of America Stadium, where the fallout from a bill regarding gender identity has cost the stadium a college football conference title game. That stadium is located in a city where the state shot and killed another black man, and where the Constitution then came alive on the streets for days; in a state where polling for the presidential, senatorial and gubernatorial races are all within one percentage point and where a single vote may very well carry more weight than a vote in any other state; in a country that has embarrassed itself the past 18 months with the most shameful election in its history.

Those 63 players talk politics in this locker room, and they’re as exhausted as the rest of us.

“Whether our locker room is a microcosm of the rest of the country or [if it’s] mostly the people I find myself around on a regular basis, I think, very much like everybody else, everyone has given up on the individual [candidate],” All-Pro tight end Greg Olsen said of the presidential election. “Voting for the person has really become a lose-lose to a degree.”

The Panthers haven’t been able to hide from politics in recent years. They represent two Carolinas, one of which wrestled with whether to keep the Confederate flag as an ostensible state symbol just a year ago. The other is attempting to suppress mostly black and brown votes while also wrestling with where a person who identifies as a woman but has male genitalia should go to relieve herself.

Political talk rarely—if ever—finds its way onto the practice field. It’s kept to the locker room, the cafeteria and the Thursday bull sessions. Players have talked about the highlights of the debate from the previous night, Charlotte’s unrest in September and, of course, “locker room talk.” Olsen, safety Tre Boston and long snapper J.J. Jansen are three of the most vocal (read: opinionated) players on the roster. The talks may get contentious at times, but no player said it ever boiled over.

“These young men have to understand the impact that they’re going to have in their communities. Some of these young guys are going to grow up and be community leaders from Greg Olsen to Thomas Davis,” Panthers coach Ron Rivera said. “These guys have a civic responsibility, and the first step is understanding that you do have a voice and your voice should be heard.”

There are no women in an NFL locker room workplace, and most of the men are between the ages of 21 and 35. But within that group there is great diversity. From poverty to upper class, from city living to suburbs to farmland and even the size of their colleges, there’s a richness of backgrounds and diversity in a locker room. Olsen identifies as socially moderate/liberal and fiscally conservative but sees the overlap. For myriad reasons, he said, some people can’t just go get a job, and those people need assistance from others, be it charity or the government.

“Just because I wasn’t around it or experienced it or had someone give me the details, doesn’t mean I’m not open to having a different stance or seeing things through a different perspective,” Olsen said. “There are a lot of issues where I feel I have room to learn more about and possibly as a result have a change in opinion.

“I think you get a lot of life experiences and they all get dumped in a locker room and they say ‘Hey, spend 10 months a year with each other.’ That’s a great example that just because you have different backgrounds and you may be staunchly on the other side on different issues, it doesn’t mean that you can’t cohabitate.”

Not everyone is as interested or as vocal as Olsen, whom one Panthers staffer referred to recently as a future senator. Safety Colin Jones had a tweet critical of Trump wrongly attributed to him by the Washington Post last month and said he didn’t want to say anything related to this election.

Pro Bowl guard Trai Turner wouldn’t divulge whom he’s voting for or even if he’s voting. But he seemed bewildered at the apathy among some of his teammates.

“You have your cats that say, ‘Oh I’m not worried about it.’ OK that’s fine,” Turner said. “You have your cats who say, ‘Oh it’s just the president. He doesn’t really make decisions.’ Well then who does? We have all these opinions and feel these different ways and let’s try to make sense. But that’s too hard. It’s so easy, it’s hard. Everyone’s doing what they’re doing, so I’m going to do what I’m doing. I’m not telling you what I’m doing, but I’m doing it.”

Rookie tight end Beau Sandland has the pleasure of having a locker beside Olsen. He hears the Pro Bowl tight end talk politics daily, whether it’s across the locker room with a teammate or corralling a media member to discuss the latest headlines. Sandland, who said it’d be disrespectful to those before us not to cast a vote, can sometimes be seen listening in on the conversations but rarely offering his two cents.

“My attitude has been ‘OK, I’m a rookie,’” Sandland said. “I’m going to keep my mouth shut and my ears open and be a sponge.”

Rivera has tried to facilitate these talks in recent years. He leans heavily on military members—he had Lieutenant Colonel J.C. Glick speak shortly after Colin Kaepernick’s kneeling gained international attention—and sits quietly and listens when a few players gather to chat around the facility. He told his players that if they don’t vote, he doesn’t want to hear them complain after Nov. 8.

People in this city, like every sports town, look up to these players. Rivera believes it’s important to set an example, but how much should athletes and politics mix? Last week he paraphrased Charles Barkley by saying he’s “not here to raise anybody.”

In 2014, the Panthers thrust him in front of the cameras to explain why Greg Hardy was playing in the first game, inactive in the second game and on the exempt list for the rest of the season while facing a domestic violence trial. He points to that season as one of tremendous growth and learning for him. Since then, fans and observers have looked to the Panthers for their reaction to the Charleston shooting, the Confederate flag, North Carolina’s House Bill 2 a.k.a. the “bathroom bill” and the civil unrest in the city following the police shooting death of Keith Lamont Scott.

A Panthers fan encountered Rivera after the coach voted early last month. The fan wanted to know if Rivera voted “the right way,” and the coach, knowing what the fan meant, said “I voted American.”

“I know people want me to say things and do things but I don’t think it’s my spot,” Rivera said. “I have problems when people look at us as we are the moral and social and legal guide to America. There’s the Bible, or whichever book you believe in, and the constitution. Those are our moral and social compasses. Those are the things we should be living off of.

“We live in a great state, a great city, and all the craziness that’s gone on in the last year and a half … I know all those HB2 things are going on and those things have to be corrected. Obamacare has got to be corrected and fixed. So if you truly believe in something then you need to vote.”

It’s unclear how split the Carolina locker room is on this presidential election—about a half-dozen players last week declined to anonymously say for whom they are voting before a reporter ceased his informal polling. The Panthers’ locker room is two-thirds black and Trump is polling in the low single digits among blacks. and so statistically speaking, taking into account the likely voting patterns of the 30-plus black players in the locker room, it means Trump should get no more than one vote from a black Panthers player.

By Tuesday morning, Trump and Clinton will have visited the state no fewer than 24 combined times in the past 23 weeks, and that doesn’t take into account the dozens of visits from their respective surrogates. There are 15 crucial electoral votes at stake here, and these Panthers represent some of the most visible, well-known residents of this state.

The players’ opinions clearly differ across the board, but their overwhelming sentiment seems to be in line with most Americans.

“I remember being younger and watching the debates with my parents and it was something they really paid attention to. Now it’s a show! It’s for television ratings,” Turner said. “…You’re actually, in essence, picking someone to speak for you because you can’t be heard.

“These are the two people we have talking for us?”