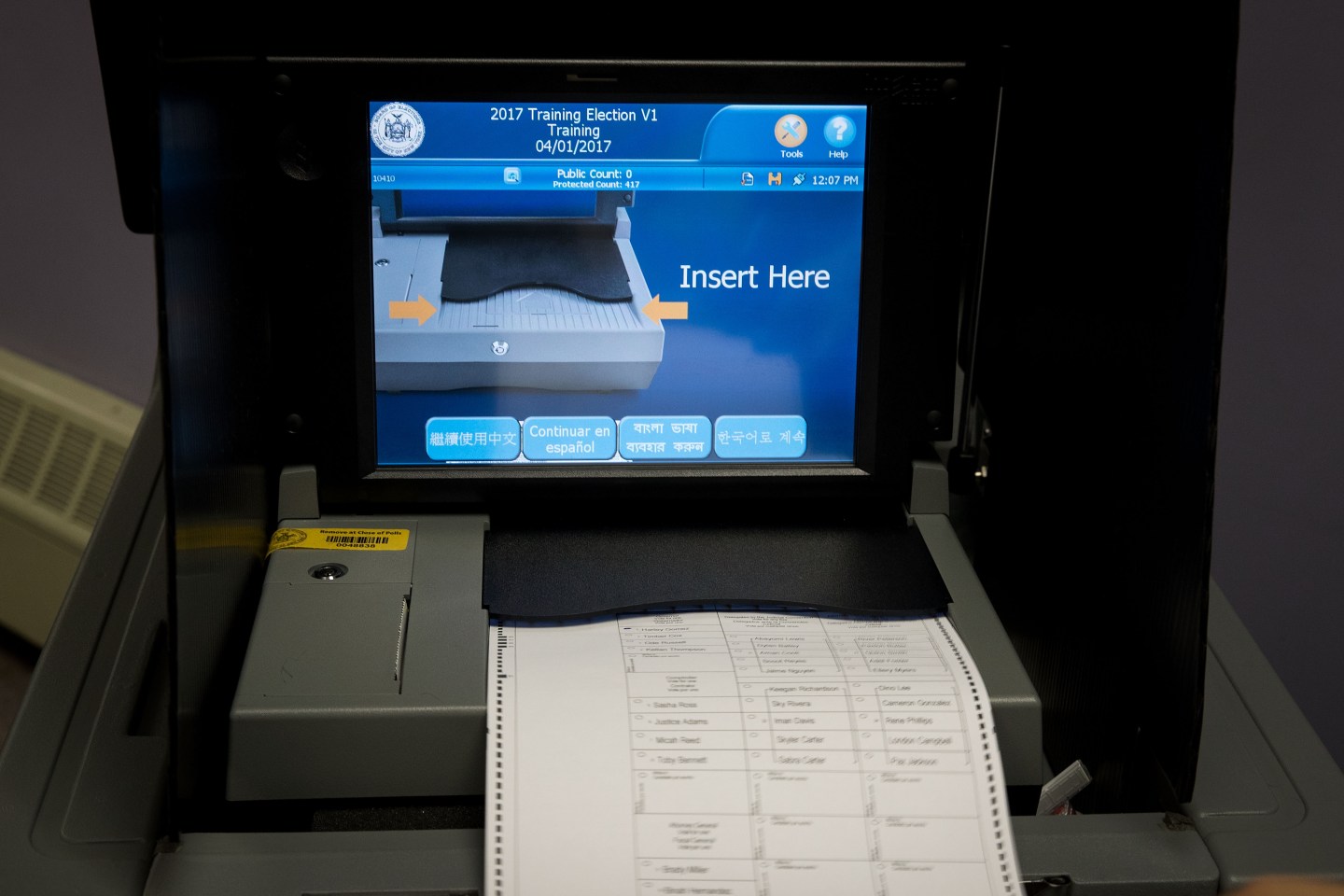 Is our voting system vulnerable to hacker attacks?

Forty-eight states already asked the Department of Homeland Security for help plugging security holes in machines. They hope to fend off the kind of debacle that caused California voting machines made by ATM-manufacturer Diebold to stop functioning, due to software bugs, in 2004.

But while Republican nominee Donald Trump has proclaimed the voting system “rigged,” there is little evidence that elections have been stolen, even by tech glitches, voting experts say. Still, there are experiments under way now in the election system that could make the way Americans vote in 2020 even more dependable and secure.

And remarkably, the key to it all: Paper.

In Travis County, Texas, an experiment called the STAR Vote project is in progress to upgrade voting equipment, to make it both secure and technologically advanced. There, a county clerk named Dana DeBeauvoir has spearheaded the development of a new system that not only ensures votes aren’t tampered with, but it enables voters to later check that their ballots have been counted. It also lets independent observers tally votes themselves, in case an audit is necessary, all without breaching anyone’s privacy or fear of tampering.

That system, which uses a combination of advanced cryptography and backup paper ballots, could be ready for voters as early as the 2020 election. In and of itself, it represents an important advance over today’s systems where malware, hacking, and lack of transparency are always dangers. Yet its development also typifies all of the struggles and complications involved in making any changes to the way Americans vote.

It’s incredibly complex to design computer systems that would allow people to vote privately, also prevent tampering, and perform without glitches that could endanger even a single vote, computer scientists say. For those reasons you really can’t beat systems that include paper, which provides an audit trail, experts say. And the majority of polling booths, which have basically operated unchanged for the last 15 years, today provide that.

At the same time, there’s little profit motive for entrenched voting equipment manufacturers to substantially change current voting technology, which is a hodgepodge of touch- and touch-button screens, optical scanners, and paper ballots. Add to that a federal and state certification process for new technology that can take years and easily cost hundreds of thousands of dollars, and you’re basically left with the status quo—and systems that get an overhaul once every 20 to 30 years.

“I have managed to pull together $4 million to get us started and to phase one, which is building the prototype,” DeBeavoir says, adding it could take more than a year and close to $1 million to get her system certified.

In fact, most people have faith in federal elections today, with two thirds of voters expressing confidence their votes will be cast and counted accurately, an increase of four percentage points from August, according to an October poll by Gallup.

Still, systems could be radically improved. With the rise of mobile computing, smart phones and apps that let you do just about anything, pressure is steadily mounting to open up the voting process to devices that will let voters vote from anywhere, political scientists say.

“The more you know about how computers actually work, the more concerned you become that there is no way to independently audit the functions of these machines,” says Pamela Smith, the president of Verified Voting, a non-profit that advocates for accuracy and integrity of elections.

That’s one reason, even with technological advances like cryptography and blockchain, the underpinning of the currency Bitcoin, paper is likely to be part of the equation for many years to come.

“It is clear that as things stand right now, the electronic systems without paper backup are probably not secure enough to deploy,” says Charles Stewart, co-director of the Caltech MIT Voting Technology project, and a professor of political science at MIT.

Yet the pace of innovation is slow, even to make incremental changes. That’s because there’s not much money in elections, says Stewart, who estimates the entire size of the voting equipment industry—dominated by a handful of companies such as ES&S and Hart InterCivic–to be less than the size of the lawn mower sector, currently worth about $10 billion.

“It would cost about $1 billion to buy every district [in the U.S.] new voting machines,” Stewart says, adding that technology being developed in trials such as the one currently under way in Travis County will start to become the norm in 2020. Nonetheless, we aren’t likely to see really big changes to voting machines—which might entail secure, mobile voting solutions–until 2040, when systems such as the one currently in development in Texas will already be considered out of date.

That’s not to say there aren’t startups hoping to shake things up now. Free & Fair, of Portland, Oregon, has developed a secure suite of open-source voting hardware and software that tackles many of the most common voting problems, such as line management at polling places, overseas balloting, and post-election auditing.

The company, which has 63 employees, is led by Joe Kiniry, a former software engineering professor. Kiniry says the slow pace of change in the industry is related to the cozy relationships between the big industry players and the various voting districts around the country. A lack of transparency about technology and pricing also inhibits competition and development, he says.

Yet Kiniry, says projects like STAR Vote, with which it plans to work, will reshape how we vote going forward.

“This is a part of the future that we believe accounts for supervised polling place voting, as well as early voting on paper,” Kiniry says.