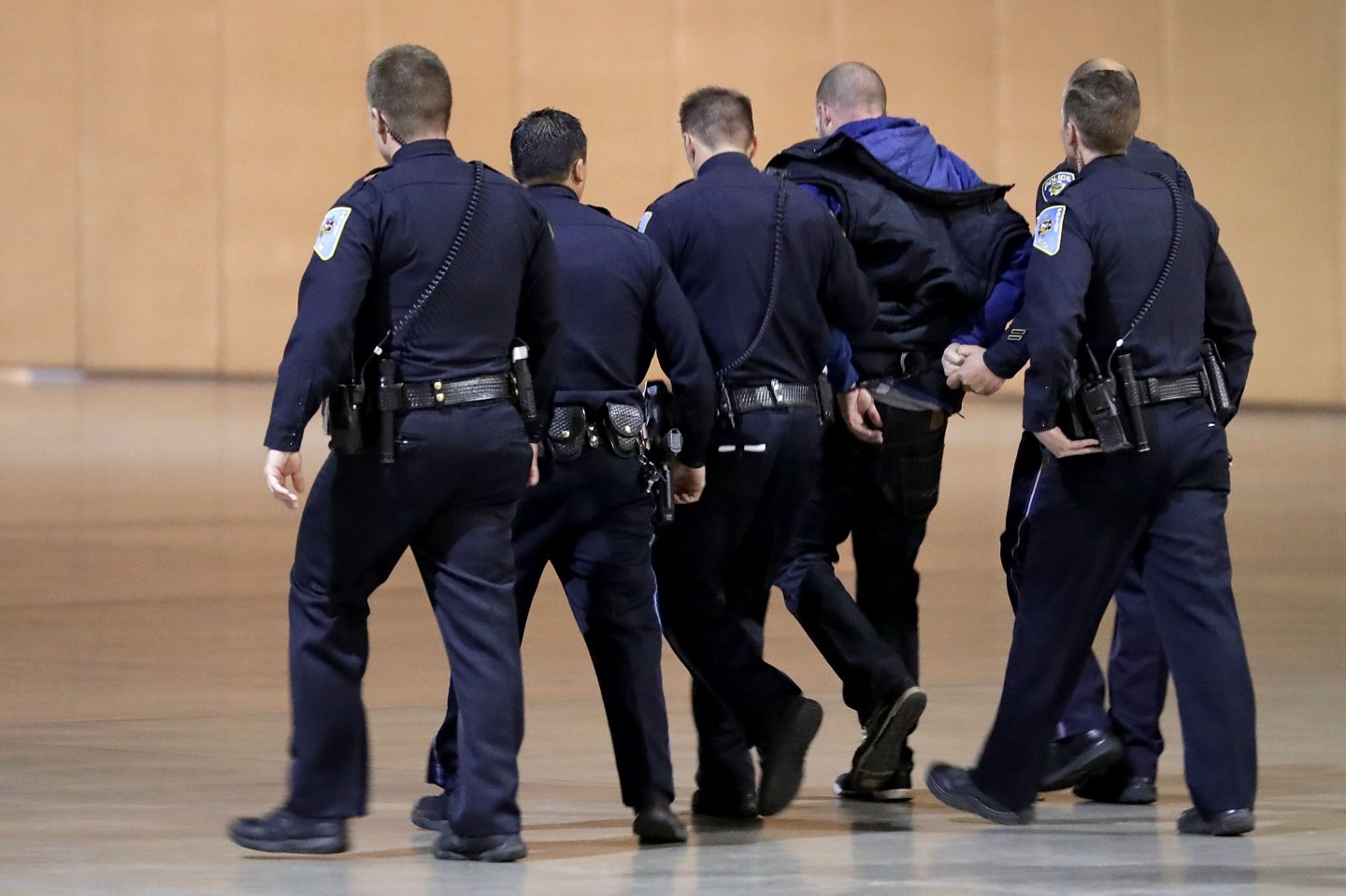 RENO, NV - NOVEMBER 05: Police officers and U.S. Secret Service take a man away in handcuffs from a campaign rally for Republican presidential nominee Donald Trump at the Reno-Sparks Convention Center November 5, 2016 in Reno, Nevada. With less than a week before Election Day in the United States, Trump and his opponent, Democratic presidential nominee Hillary Clinton, are campaigning in key battleground states that each must win to take the White House. (Photo by Chip Somodevilla/Getty Images)
Chip Somodevilla Getty Images

No weapon was involved in a commotion that briefly disrupted Donald Trump’s Saturday night rally and caused agents to hustle Trump from the stage, the Secret Service said.

The Republican presidential nominee had been speaking to supporters for a while when a disturbance broke out in the crowd close to the podium. Two Secret Service agents quickly surrounded Trump, then hustled him away.

In a statement, the Secret Service said a person in front of the stage had shouted “Gun!” but that no weapon was found after a search of the person and the immediate area. The person was apprehended, but officials did not identify the person or disclose whether the person had been charged with a crime.

The Secret Service said an investigation into the incident was ongoing.

Upon his return to the stage a few minutes later, Trump thanked the Secret Service and told the crowd: “Nobody said it was going to be easy for us. But we will never be stopped. Never ever be stopped.”

The Secret Service statement noted that magnetometers are used at presidential campaign sites.

“All general public attending these events must go through a magnetometer screening prior to entering a protected area,” the agency said.

Donald Trump’s son and a top campaign aide were falsely spreading the rumor that an incident at a Nevada rally was an “assassination attempt” against the candidate even though no weapon was found.

Trump’s son, Don Jr., and Dan Scavino, who runs Trump’s social media operation, re-tweeted a message that read, “Hillary ran away from rain today. Trump is back on stage minutes after assassination attempt.”

At Trump’s next rally in Denver, a pastor, introduced as Father Andre Y-Sebastian Mahanna, also falsely called the Reno incident “an attempt of murder against Mr. Trump.” Mahanna blamed the incident on the media for inciting hate against the Republican nominee.