Donald Trump Rushed Off Stage by Secret Service at Rally 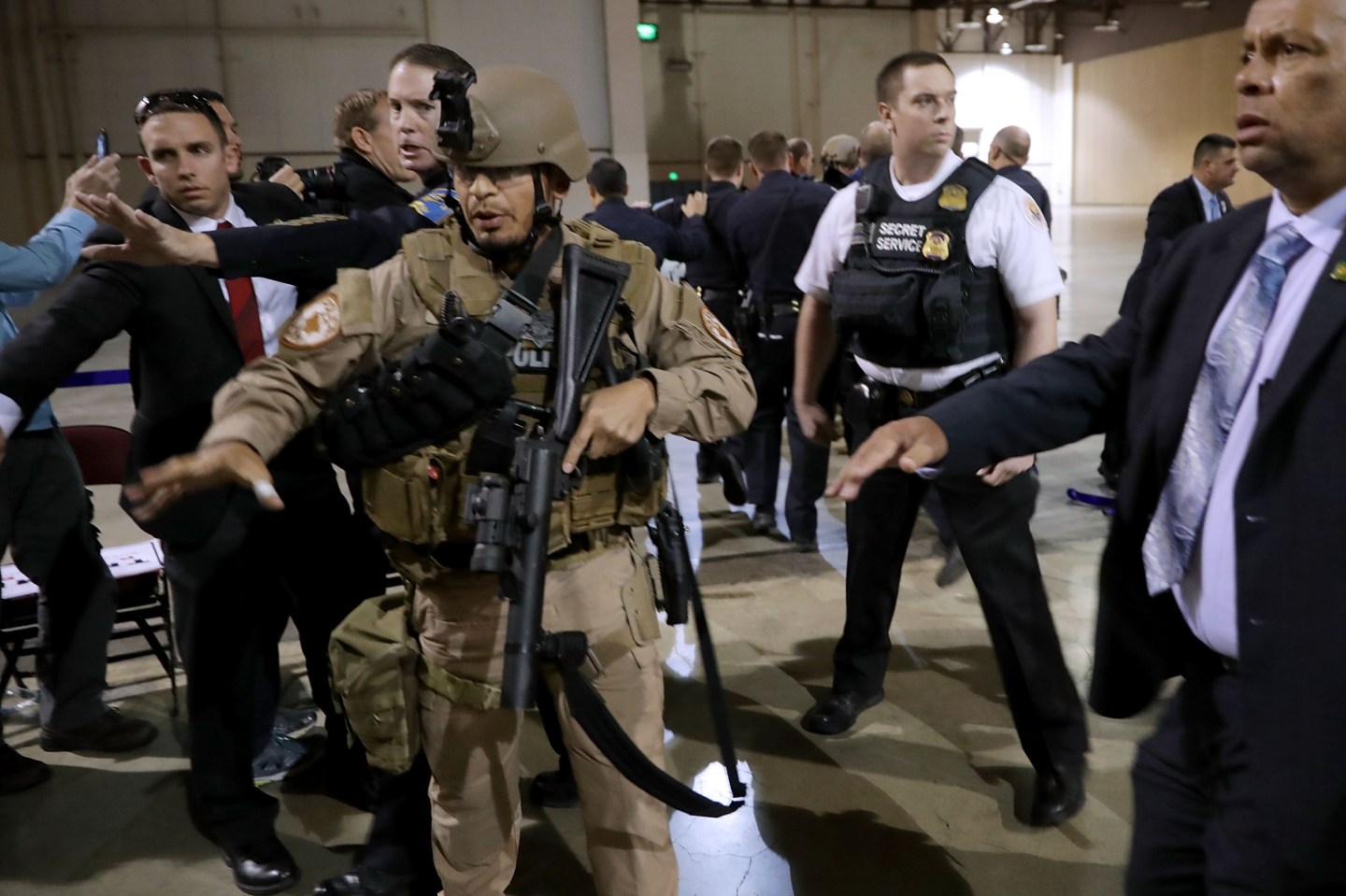 RENO, NV - NOVEMBER 05: Police officers and U.S. Secret Service rush a man in handcuffs out of a campaign rally for Republican presidential nominee Donald Trump at the Reno-Sparks Convention Center November 5, 2016 in Reno, Nevada. With less than a week before Election Day in the United States, Trump and his opponent, Democratic presidential nominee Hillary Clinton, are campaigning in key battleground states that each must win to take the White House. (Photo by Chip Somodevilla/Getty Images)
Chip Somodevilla Getty Images

Republican presidential nominee Donald Trump was briefly rushed off stage Saturday evening at a rally in Reno, Nevada after an apparent security incident.

Speaking at a rally three days before Election Day, Trump was rushed off stage by two Secret Service agents just after 6 p.m. local time after a disturbance near the front of the Reno-Sparks Convention Center hall. Secret Service agents, Trump Security, and a local SWAT team could be seen rushing an area near the stage moments after Trump was escorted out of the room. It appeared one person was removed by law enforcement.

Several civilians told reporters that they had observed a person with a gun at the rally, and supporters could be heard shouting “he’s got a gun” before agents rushed toward Trump.

A law enforcement official who spoke on condition of anonymity said authorities did not recover a weapon. It appears that the crowd overreacted to a person raising a sign, and someone shouted “gun,” the official said.

Trump returned to the stage about 10 minutes later to continue delivering his stump speech. “No one said it would be easy for us,” Trump said, addressing the incident. “But we will never be stopped.” He also thanked the Secret Service for their work.

Trump also issued a statement Saturday evening: “I would like to thank the United States Secret Service and the law enforcement resources in Reno and the state of Nevada for their fast and professional response. I also want to thank the many thousands of people present for their unwavering and unbelievable support. Nothing will stop us – we will make America great again!”

The U.S. Secret Service did not immediately respond to a request for additional information on the incident.

It’s not the first security incident at a Trump rally. In a March speech in Vandalia, Ohio, Secret Service agents rushed the stage briefly after a disturbance in the crowd. And at a June rally in Las Vegas, Michael Steven Sandford attempted to steal a police officer’s weapon, allegedly in order to shoot Trump. He pleaded guilty to federal charges in September.

After the event, Trump departed Reno for his final event of the day in Denver.