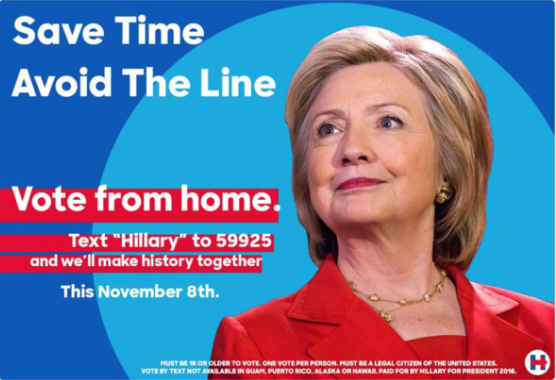 A dirty tricks campaign for the digital era popped up on Twitter this week. It involved a series of fake ads, apparently aimed at black and Latino voters, which provides a phone code for voters to “text” their votes for Democratic presidential nominee Hillary Clinton.

The ads, which first came to the media’s attention on Wednesday, carried captions like “Vote from Home” and “Avoid the Line,” as well as the #I’mWithHer hashtag and a small message saying they had been paid for by the Clinton campaign.

It is not possible to vote by text message, which suggests the point of the fake ads was to suppress Democratic turnout by tricking people into thinking they had already voted.

Here is another one written in Spanish:

It’s not clear who is distributing the fake ads or why, but some of the people sharing them used Twitter handles—such as “@nia4_trump” and “@FountainHead55″—that suggest they have an affinity for Republican nominee Donald Trump or at least conservatives. There is no evidence, though, to suggest the fake ads are in any way tied to the official Trump campaign.

While such tactics are clearly distasteful, they are apparently not illegal, according to Rick Hasen, a law professor at UC Irvine, who publishes the Election Law Blog.

“There is no law against misinformation or lying at polls. It is possible to argue that providing some misinformation to voters could be seen as voter intimidation and therefore a violation of the Voting Rights Act and other federal (and state) laws. But I don’t think that would apply to these ads,” Hasen told Fortune by email, adding that President Obama had proposed a law against such misinformation when he was a Senator.

As New York reports, those who send a text message to the number listed in the fake ads will now receive a response saying the message is not affiliated with the Clinton campaign.

The incident also raised questions of why Twitter allowed the fake ads to appear in the first place. In response to a user complaint, Twitter initially stated ads are not a violation of its terms of service:

Twitter just informed me that attempting to disenfranchise voters is not a violation of their Terms of Service. @jack @Support pic.twitter.com/YXVdt8sHwA

The company’s CEO Jack Dorsey has since responded on Twitter, suggesting the initial response was an oversight and that the ads have since been removed.

Meanwhile, for those who haven’t yet voted, there are still only ways to do so. You can mail in an absentee ballot or find your local polling place and vote on election day, November 8.