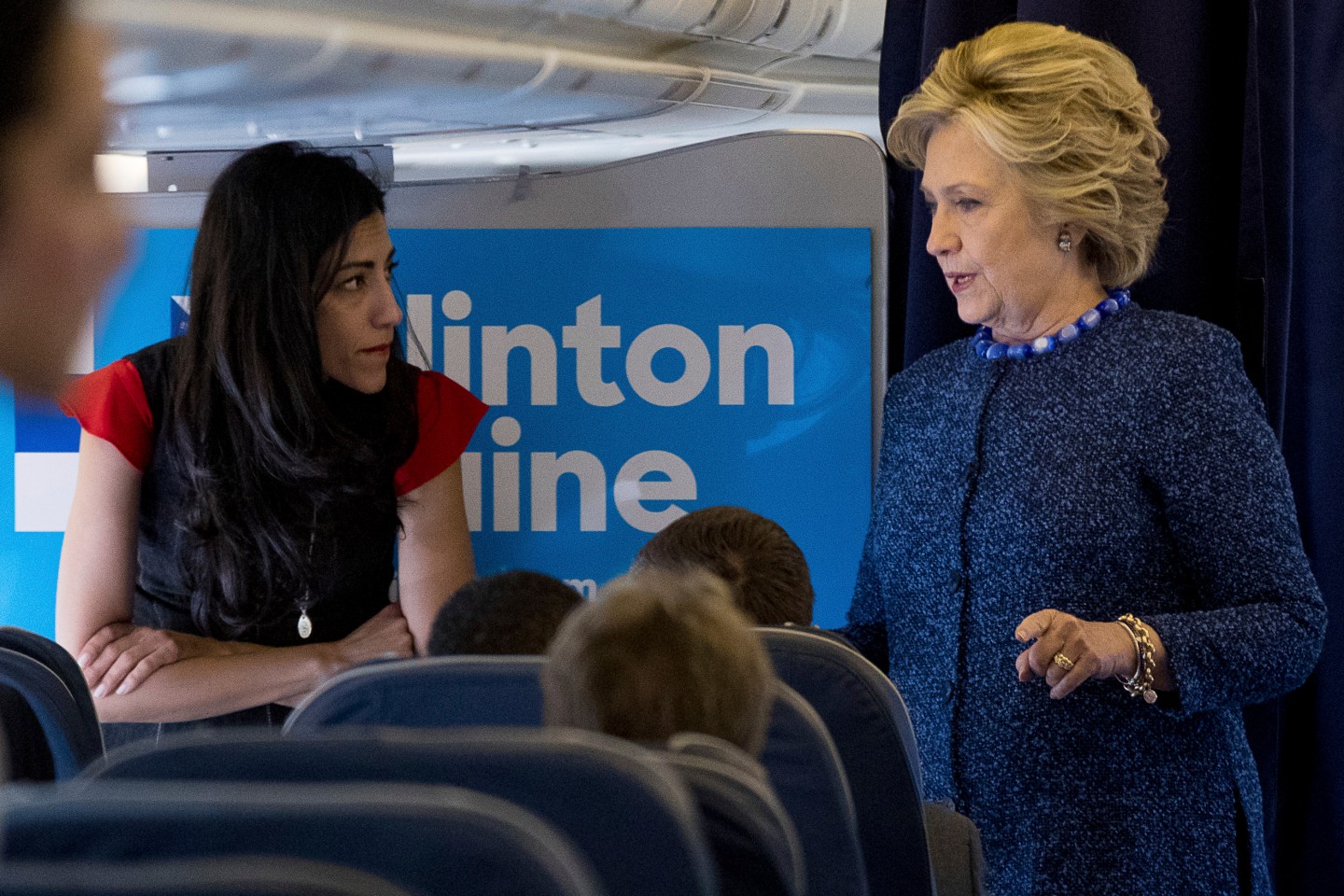 FILE - In this Oct. 28, 2016 file photo, Democratic presidential candidate Hillary Clinton speaks with senior aide Huma Abedin aboard her campaign plane at Westchester County Airport in White Plains. The longtime Hillary Clinton aide at the center of a renewed FBI email investigation testified under oath four months ago she never deleted old emails, despite promising in 2013 not to take sensitive files when she left the State Department. (AP Photo/Andrew Harnik, File)
Photograph by Andrew Harnik—AP

The FBI has obtained a warrant to begin reviewing newly discovered emails that may be relevant to the Hillary Clinton email server investigation, a law enforcement official has told The Associated Press.

FBI investigators want to review emails of longtime Clinton aide Huma Abedin that were found on a device seized during an unrelated sexting investigation of Anthony Weiner, a former New York congressman and Abedin’s estranged husband.

The official, who has knowledge of the examination, would not say when investigators might complete the review of Abedin’s emails but said Sunday they would move expeditiously.

The Clinton email inquiry, which closed without charges in July, resurfaced on Friday when FBI Director James Comey alerted members of Congress to the existence of emails that he said could be pertinent to that investigation.

The FBI wants to review the emails to see if they contain classified information and were handled properly, the focus of the earlier Clinton inquiry.

In his letter that roiled the White House race, Comey said he’d been briefed on Thursday about the Abedin emails and had agreed that investigators should take steps to review them.

It was not immediately clear Sunday what steps investigators took once the emails were first found to fully advise FBI leaders that additional and potentially relevant messages had been discovered.

The officials were not authorized to discuss the matter by name and spoke on condition of anonymity.

The timing of Comey’s letter less than two weeks before Election Day drew criticism from Democrats and some Republicans who cast it as unprecedented and as potentially tipping the scales in the presidential race in favor of Republican Donald Trump.

Energized by the news, the GOP presidential nominee has rallied his supporters, calling the latest developments worse than Watergate and arguing that his candidacy has the momentum in the final days of the race.

“We never thought we were going to say ‘thank you’ to Anthony Weiner,” Trump said in Nevada.

Trump also highlighted reports that the Justice Department had discouraged the FBI from alerting Congress to the unexpected discovery of the emails, and said the department is trying “so hard” to protect Clinton.

Comey told FBI colleagues in a memo Friday that he was aware the letter to Congress was at risk of being misunderstood, but he said he felt obligated to notify lawmakers about the new emails after having told them that the matter was closed.

Clinton’s use of a private email server while secretary of State has dogged her campaign since early last year. In July, Comey recommended against criminal prosecution after a months-long investigation, but rebuked Clinton and her aides for being careless with classified material.

Justice Department officials who were advised of the FBI’s intention to notify Congress about the discovery expressed concern that the action would be inconsistent with department protocols designed to avoid the appearance of interference in an election. Comey acted independently when he sent several members of Congress a letter about the emails on Friday, said one of the officials.

It was not immediately clear what the Abedin emails were about or what significance, if any, they carried to the Clinton email server investigation.

A person familiar with the investigation, who lacked authority to discuss the matter publicly and insisted on anonymity, said the device that appears to be at the center of the new review was a computer that belonged only to Weiner and was not one he shared with Abedin.

As a result, it was not a device searched for work-related emails at the time of the initial investigation. The person said it is “news to (Abedin)” that her emails would be on a computer belonging to her husband.

Abedin told lawyers in June in a deposition that, like millions of internet users who don’t manage their inboxes, she never deleted old emails on her devices, either at work with Clinton or at home with Weiner.

“I didn’t have a practice of managing my mailbox other than leaving what was in there sitting in there,” Abedin said. “They all stayed in whatever device I was using at the time or whatever desktop I was on at the time.”

In February 2013, Abedin signed a routine State Department document under penalty of perjury in which she promised to “turn over all classified or administratively controlled documents and materials” before she left her government job, and promised that she was not retaining copies, “including any diaries, memorandums of conversation or other documents of a personal nature.”

Abedin and Weiner separated this year after Weiner was caught in 2011, 2013 and again this year sending numerous woman sexually explicit text messages and photographs of himself undressed. Federal authorities in New York and North Carolina are investigating online communications between Weiner and a 15-year-old girl.