The FBI Reportedly Knew About The New Emails Weeks Ago 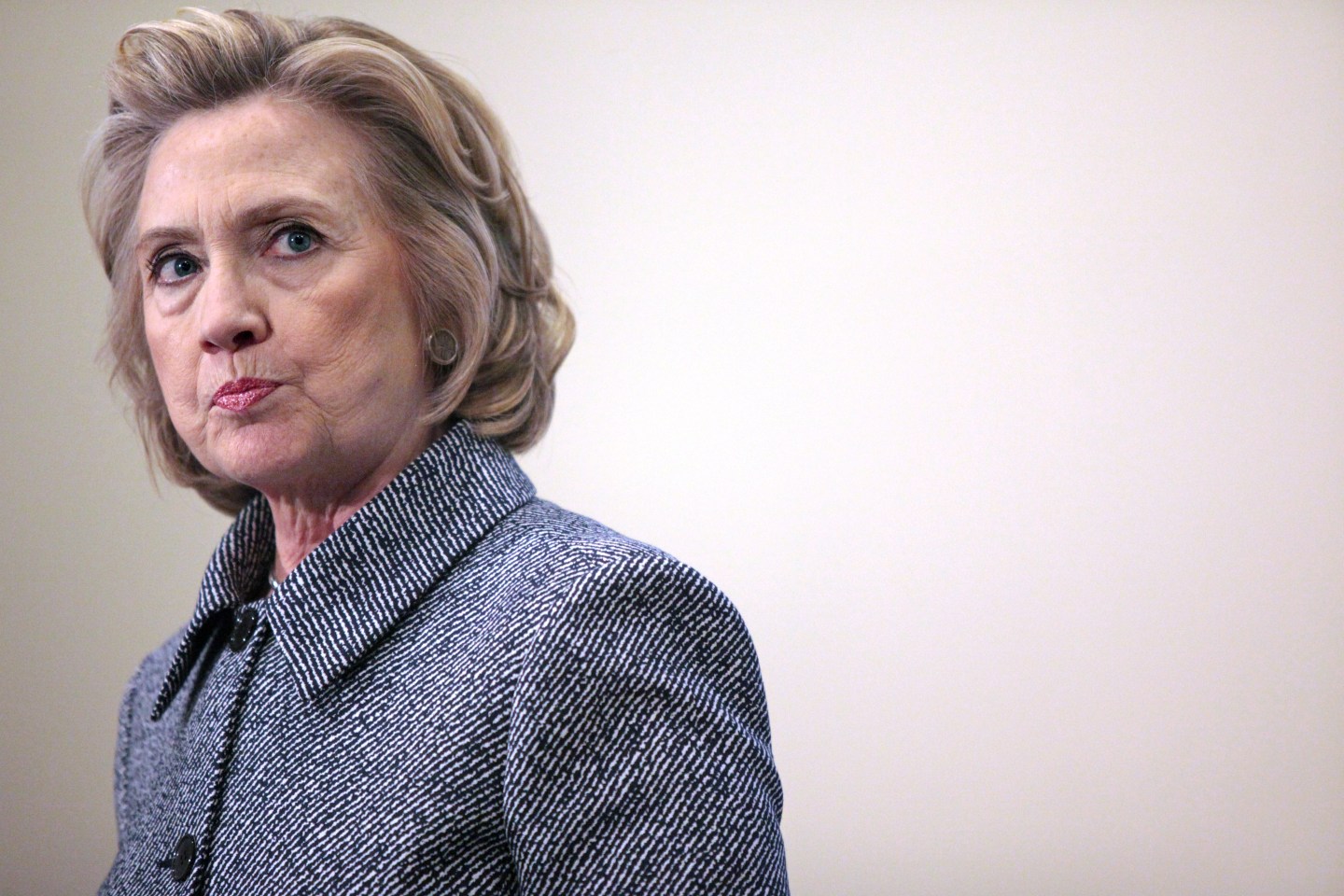 The Latest on the 2016 presidential race (all times EDT):

A law enforcement official says FBI investigators in the Anthony Weiner sexting probe knew for weeks about the existence of newly discovered emails that might be relevant to the Hillary Clinton email investigation.

FBI Director James Comey said he was briefed Thursday about that development; he told Congress on Friday that investigators had found emails that were potentially relevant to the Clinton investigation.

The emails were found on a device that belonged to Weiner, the estranged husband of close Clinton aide Huma Abedin.

The official was not authorized to discuss the matter by name and spoke on condition of anonymity.

A second law enforcement official also said the FBI was aware for a period of time about the emails before Comey was briefed, but wasn’t more specific.

Clinton singled out a Washington Post report that Trump attended a fundraiser for young children with HIV but never donated money. “Who does that?” she asked.

Clinton is speaking to gay and lesbian supporters in South Florida, where she’s spent the day campaigning. She said Trump has a “terrible record on LGBT rights” and warned he would nominate Supreme Court justices who would overturn the legality of gay marriage.

Donald Trump’s wife will be making a rare appearance on the campaign trail with just days to go before Election Day.

It will be her first appearance on the campaign trail since her speech at the Republican National Convention.

That speech was well-received. But it was quickly overshadowed with allegations that she had plagiarized sections from a speech given by First Lady Michelle Obama.

Mrs. Trump has taken an unusually behind-the-scenes role in the election, choosing to stay home with her son instead of joining her husband on the trail.

The campaign did not immediately respond to questions about the topic of the speech or whether she would be accompanied by her husband.

Donald Trump is kicking off a day of campaigning in the West with a stop at a nondenominational church in Las Vegas.

Trump swayed and clapped to the music at the International Church of Las Vegas. Churchgoers were on their feet, and dancing and singing to the choir and band.

Earlier in October, the Republican presidential nominee visited a school affiliated with the church.

Hillary Clinton is encouraging churchgoers to reflect on the disappointments in their lives and how they’ve been able to overcome.

She didn’t directly mention a new FBI inquiry tied to her email use while at the State Department. Her campaign has demanded the FBI be more forthcoming about what new information it’s seeking.

Clinton told the congregation that if she wins the White House, she won’t shy away from taking on racism, sexism and other forms of discrimination. She said he’s work to defend President Barack Obama’s legacy, and that led the church members to leap up.

A supervisor in a suburban New York City town says Bill and Hillary Clinton and their contractor are getting permits to renovate their property after a newspaper reported they hadn’t done that even though work was underway.

New Castle supervisor Robert Greenstein says in the course of doing some renovations to the property, “it became apparent” the contractor hadn’t secured the required permits.

He says when the Clintons became aware of this, they “immediately took steps with their contractor” to rectify the situation.

The Journal News reported Friday that the Clintons had been renovating the home without permits. The couple bought the three-bedroom home next door to their house in Chappaqua, New York, in August, expanding their property.

Hillary Clinton is greeting a group of Miami Democrats getting ready to vote early in the presidential election.

Clinton made a Sunday morning stop at a Miami restaurant where dozens of people were having brunch before heading to their polling places. She told them she wanted them to get “fueled up” for the sprint to Election Day on Nov. 8.

Clinton is spending her second day in a row in Florida, the biggest battleground prize at stake in her race against Republican Donald Trump.

John Podesta says on CNN’s “State of the Union” that Comey should have reviewed the information more thoroughly before making the decision public. Now, Podesta says, Comey should explain why “he took this unprecedented step, particularly when he said himself in the letter to the Hill that these (emails) may not even be significant.”

The FBI concluded in July its investigation into Clinton’s use of a personal email server. But Comey told Congress on Friday that new emails were discovered during a separate investigation of former New York congressman, Anthony Weiner.

Donald Trump’s campaign manager says FBI Director James Comey was in an impossible spot when he publicly acknowledged that his agency was looking into a potential new set of messages from Hillary Clinton’s private email server.

In an interview on CNN’s “State of the Union,” Kellyanne Conway says that Comey could be accused of interfering in the election if he didn’t disclose that Clinton-related emails were under FBI investigation for the second time in a year.

Conway rejects that Trump and the campaign had besmirched the reputation of Comey after the FBI in July recommended that no charges be filed against Clinton.

She says her comment about “zero accountability” at the FBI was not an attack of Comey, but of the process that led up to Clinton being absolved of charges.

Hillary Clinton’s campaign is standing by top aide Huma Abedin as the FBI investigates emails found on a laptop she shared with estranged husband Anthony Weiner.

Campaign Manager Robby Mook said on NBC’s “Meet the Press” Sunday that he is “absolutely” confident that Abedin has fully complied with the agency during its previous probe into Clinton’s homebrew email server.

Mook noted that FBI Director James Comey did not say in his letter to Congress Friday whose emails the agency is now investigating. He said the onus of releasing the newly-discovered emails lies with the FBI.

Abedin told lawyers in June in a deposition that she never deleted old emails on her devices.

Vice presidential candidate Tim Kaine says FBI Director James Comey needs to tell the public if he hasn’t yet reviewed any of the emails considered “pertinent” to the investigation into Hillary Clinton’s use of a private email server.

Clinton’s running mate says in an interview with ABC’s “This Week” that as far as the campaign knows, Comey “knows nothing about the content of these emails.” The Virginia senator says the Democratic campaign doesn’t know if the emails are to or from Clinton.

Kaine is reiterating that the FBI should release more details on their investigation. He calls it a “distraction” but says the Clinton campaign will “power forward” during the last 10 days.

Mike Pence says Donald Trump has “made it clear we’ll have the resources we need.” But Pence won’t say if his running mate has promised to pump even more of his own money into the Republican presidential campaign.

Appearing on “Fox News Sunday,” Pence is praising “the incredible generosity” of Trump, which has self-funded some of the campaign. Still, Trump badly trails Hillary Clinton in cash-on-hand.

Pressed on whether Trump will offer more money as the Nov. 8 election looms, Pence says only that Trump has promised the necessary resources “to drive our message.”

Pence also says the FBI’s investigation into newly discovered emails by a Clinton aide shows she is “just a risky choice in this election.”