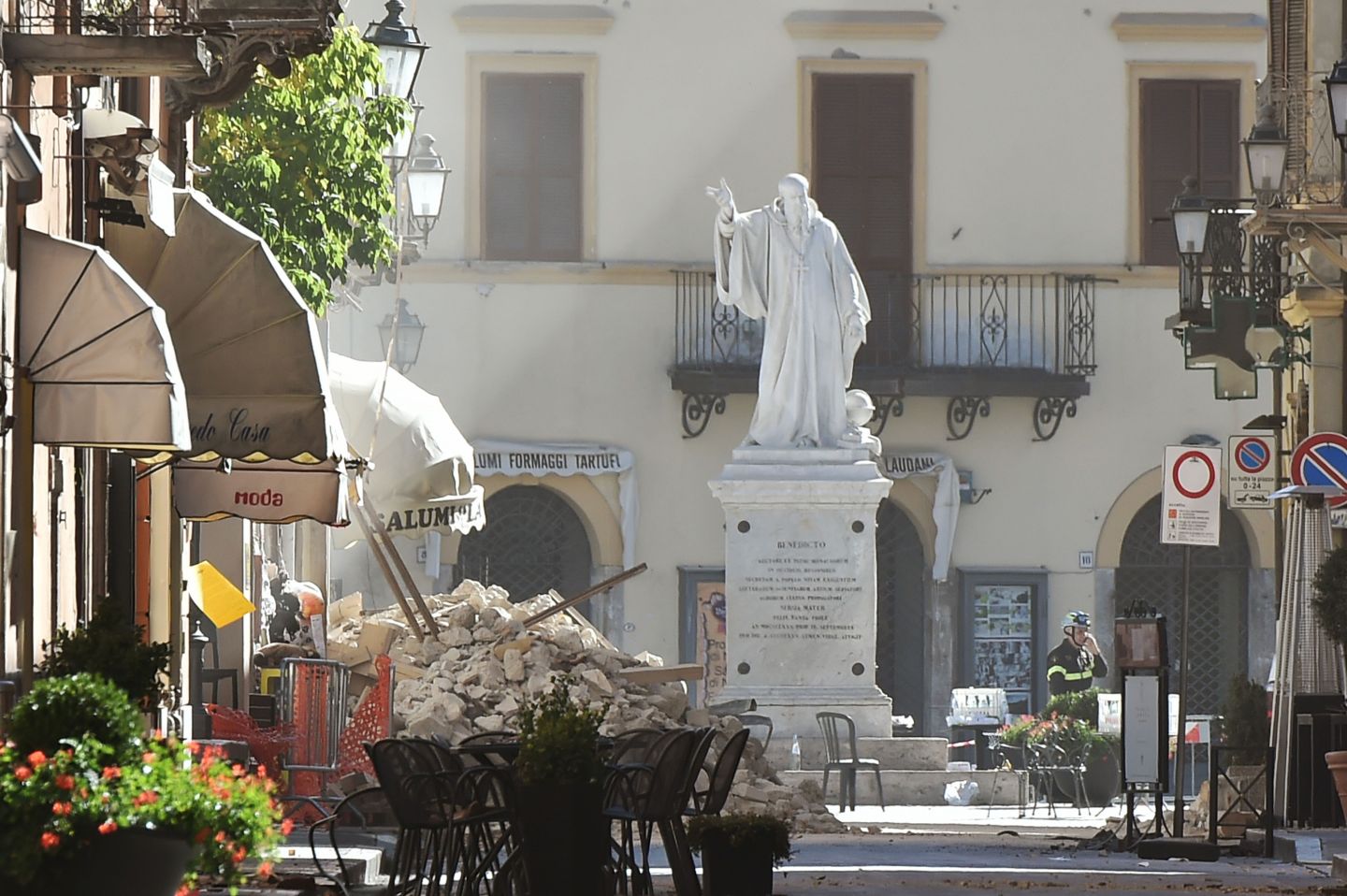 A picture shows rubbles in the center of Norcia after a 6.6 magnitude earthquake on October 30, 2016. It came four days after quakes of 5.5 and 6.1 magnitude hit the same area and nine weeks after nearly 300 people died in an August 24 quake that devastated the tourist town of Amatrice at the peak of the holiday season. Italy's most powerful earthquake in 36 years dealt a new blow Sunday to the country's seismically vulnerable heart, sending terrified residents fleeing for the third time in nine weeks and flattening a revered six-century-old church. / AFP / ALBERTO PIZZOLI (Photo credit should read ALBERTO PIZZOLI/AFP/Getty Images)
ALBERTO PIZZOLI AFP/Getty Images

A powerful earthquake struck Italy on Sunday in the same central regions that have been rocked by repeated tremors over the past two months, with more homes and churches brought down but no deaths reported.

The quake, which measured 6.6 according to the U.S. Geological Survey, was bigger than one on Aug. 24 that killed almost 300 people. Many people have fled the area since then, helping to avoid a new devastating death toll.

The latest quake was felt across much of Italy, striking at 7.40 a.m. (0640 GMT), its epicenter close to the historic Umbrian walled town of Norcia, some 100 km (60 miles) from the university city of Perugia.

Panicked Norcia residents rushed into the streets and the town’s ancient Basilica of St. Benedict collapsed, leaving just the facade standing. Nuns, monks and locals sank to their knees in the main square in silent prayer before the shattered church.

“This is a tragedy. It is a coup de grace. The basilica is devastated,” Bishop Renato Boccardo of Norcia told Reuters.

“Everyone has been suspended in a never-ending state of fear and stress. They are at their wits end,” said Boccardo, referring to the thousands of tremors that have rattled the area since August, including two serious quakes on Wednesday.

Italy’s Civil Protection unit, which coordinates disaster relief, said numerous houses were destroyed on Sunday in the regions of Umbria and Marche, but either they were deserted at the time or most of the residents managed to escape beforehand.

“No deaths have been reported, but there are a number of people injured,” said Civil Protection chief Fabrizio Curcio, adding that just one person was in a serious condition.

Prime Minister Matteo Renzi said Italy was living through extremely difficult times, but promised a massive reconstruction effort in the years ahead regardless of any possible objections from the European Union over the eventual costs.

“We will rebuild everything, the houses, the churches and the businesses,” Renzi told reporters. “Everything that needs to be done to rebuild these areas will be done.”

“This morning’s quake has hit the few things that were left standing. We will have to start from scratch,” Michele Franchi, the deputy mayor of Arquata del Tronto, told Rai television.

Experts said Sunday’s quake was the strongest here since a 6.9 quake in Italy’s south in 1980 that killed 2,735 people.

The destruction of the Norcia basilica was the single most significant loss of Italy’s artistic heritage in an earthquake since a tremor in 1997 caused the collapse of the ceiling of the Basilica of St Francis in Assisi, which is 80 km to the north.

The frescoed basilica, which is the spiritual, historic and tourist heart of Norcia, was built over the site of the home where the founder of the Benedictine order and his Sister St. Scolastica were born in 480.

The basilica and monastery complex dates to the 13th century, although shrines to St. Benedict and his sister had been built there since the 8th century.

Benedict founded the Benedictine order in Subiaco, near Rome. He died in 530 in the monastery at Monte Cassino, south of Rome, which was destroyed during World War Two. That monastery was later rebuilt.

A number of other churches were also ruined on Sunday, Italian media reported, including Norcia’s Cattedrale di Santa Maria, which was built in the 16th century, while the town hall belltower had deep cracks running through its walls.

However, most of Norcia’s homes appeared to have withstood the prolonged tremor, with residents praising years of investment by local authorities in anti-seismic protection.

In the nearby city of Rieti patients were evacuated from a hospital to allow experts to check on structural damage, while hillroads across the region were littered with fallen rocks.

Sunday’s earthquake was felt as far north as Bolzano, near the border with Austria and as far south as the Puglia region at the southern tip of the Italian peninsula.

A Record 5.6 Magnitude Earthquake Shakes Oklahoma and the Midwest

It was also felt strongly in the capital Rome, where transport authorities shut down the metro system for precautionary checks. Authorities also toured the city’s main Roman Catholic basilicas looking for possible damage.

Italy sits on two geological fault lines, making it one of the most seismically active countries in Europe.

Gianluca Valinsese, a scientist at Italy’s National Institute for Geophysics and Vulcanology, warned the latest series of quakes could continue for weeks in a domino effect along the central Apennine fault system.

Italy’s deadliest quake since the start of the 20th century came in 1908, when a tremor followed by a tsunami killed an estimated 80,000 people in the southern regions of Reggio Calabria and Sicily.