What to Expect From Friday’s U.S. GDP Numbers 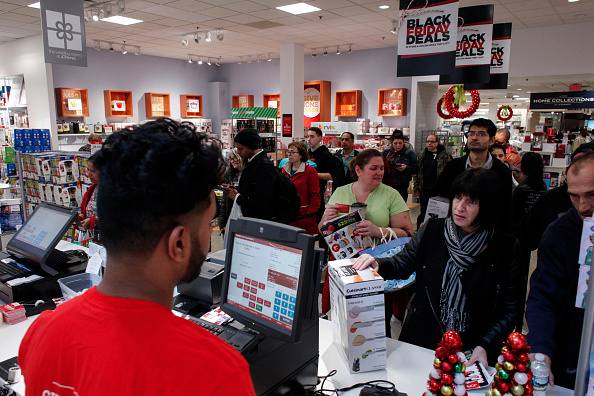 Customers pay at a cashier station in a JCpenny Store at the Newport Mall during Black Friday Sales on November 27, 2015 in Jersey City, New Jersey. It was expected that 135.8 million Americans would shop this Black Friday weekend, according to the National Retail Federation .(Photo by Kena Betancur/Getty Images)
Photograph by Kena Betancur—Getty Images

U.S. economic growth likely accelerated in the third quarter as consumers maintained a strong pace of spending and exports surged, potentially keeping the Federal Reserve on track to raise interest rates in December.

Gross domestic product probably increased at a 2.5% annual rate after expanding at a 1.4% pace in the second quarter, according to a Reuters survey of economists. That would be the strongest growth rate since the second quarter of 2015.

In addition to support from consumer spending and exports, the economy is also expected to have received a boost from a rebound in mining activity and inventory investment.

“As long as you have consumer spending, some stabilization of capital spending, trade kicking in and inventories switching from being a significant drag, that balanced composition will make us confident that things are moving in the right direction,” said Anthony Karydakis, chief economic strategist at Miller Tabak in New York.

But GDP growth could surprise on the upside after data on Wednesday showed a sharp drop in the goods trade deficit in September. The government will publish its first estimate of third-quarter GDP on Friday at 8:30 a.m. ET.

If growth meet expectations, it should help dispel any lingering fears the economy was at risk of stalling. Over the first half of the year, growth had averaged just 1.1%.

Though the Fed is mostly focused on employment and inflation, signs of economic strength would be supportive of an interest rate hike in December. The U.S. central bank raised its benchmark overnight interest rate last December for the first time in nearly a decade.

Consumer spending likely continued to power the economy in the third quarter, even as the pace slowed from the second quarter’s robust 4.3% rate. Consumer spending, which accounts for more than two-thirds of U.S. economic activity, is expected to have increased by as much as a 2.8% rate.

There are concerns that the soybean-driven export growth spurt could reverse in the fourth quarter. Economists, however, also note that exports of capital and consumer goods have been growing strongly in recent months.

Businesses probably increased spending to restock after running down inventories in the second quarter. JPMorgan estimates that businesses accumulated inventories at an $11 billion rate in the last quarter.

A rise in gas and oil well drilling likely bolstered business investment. Spending on nonresidential structures, which include oil and gas wells, is expected to have increased by as much as a 10.7% rate in the third quarter after falling at a 2.1% pace in the second quarter.

However, business spending on equipment likely dropped for a fourth straight quarter. While the pace of decline has been ebbing as oil prices stabilize and the dollar’s rally gradually fades, a strong turnaround is unlikely in the near-term.

Heavy machinery maker Caterpillar (CAT) this week reported a 49% drop in third-quarter profit from a year ago and lowered its full-year revenue outlook for the second time this year.

Caterpillar said demand for new heavy machinery had been undercut by an “abundance” of used construction equipment, a “substantial” number of idle locomotives and a “significant” number of idle mining trucks.

“A rebound in oil and gas drilling will provide a boost to third-quarter investment, but otherwise there does not seem to have been a substantial improvement in the weak investment spending trend of the past two years,” said Ted Wieseman, an economist at Morgan Stanley in New York.

Investment in residential construction likely fell for a second straight quarter, while spending by the government probably bounced back.