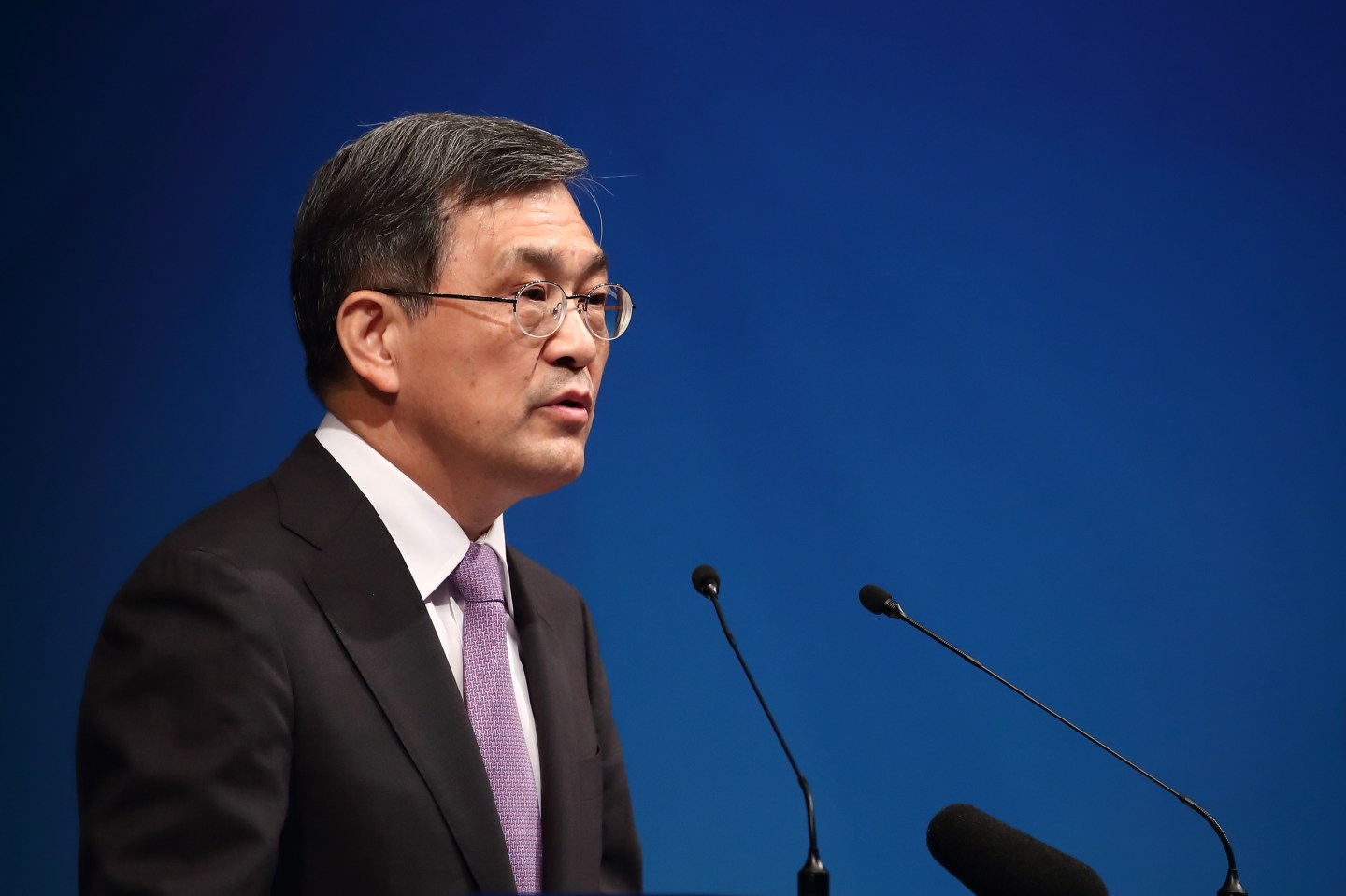 Kwon Oh-Hyun, co-vice chairman and co-chief executive officer of Samsung Electronics Co., speaks during the company's extraordinary general meeting at the company's Seocho office building in Seoul, South Korea, on Thursday, Oct. 27, 2016. Lee Jae-yong, the crown prince of the founding family that controls the Samsung Group, officially joined a nine-person board at Samsung, whose botched roll out of the Galaxy Note 7 smartphone has delivered a blow to a premier tech brand and cost the company billions of dollars in profit. Photographer: SeongJoon Cho/Bloomberg via Getty Images
SeongJoon Cho/Bloomberg via Getty Images

Samsung Electronics (SSNLF) on Thursday said it aims to recover quickly from the disastrous withdrawal of the fire-prone Galaxy Note 7 that dragged third-quarter mobile earnings to their lowest level in nearly eight years.

The South Korean giant said it was expanding its probe into the Note 7 fires beyond batteries, as it tried to reassure investors that it would get to the bottom of one of the worst product failures in tech history.

It also held out the prospect of greater returns by disclosing considerations of a share buyback, talked up its semiconductor business and promised to consider proposals for a corporate makeover from U.S. hedge fund Elliott Management.

“We know we must work hard to earn back your trust and we are committed to doing just that,” said Co-Chief Executive J.K. Shin as he apologized for the debacle at a general meeting in Seoul following the release of the company’s results.

Lee, 48, the son of patriarch Lee Kun-hee who has been hospitalized following a heart attack, will now have greater accountability at the group’s flagship company and a clearer mandate to play a public role in setting strategy.

But shareholders may have to wait for the Note 7 investigation to conclude before seeing any heads roll at the family-run conglomerate. Chief Executive Kwon Oh-hyun said the company would assign responsibility only after the crisis was resolved.

The world’s top smartphone maker posted a 96% plunge in third-quarter mobile earnings to 100 billion won ($87.63 million) from a year earlier, their lowest level since the fourth quarter of 2008.

The result, the first since the mass recall and subsequent cancellation of the premium Note 7 earlier this month, spared Samsung from its first-ever mobile loss even though overall profit hit a two-year low.

The Apple (AAPL) rival said it now aimed to achieve fourth-quarter profit close to that of October-December of 2015, on the back of sales of Galaxy S7 phones and lower-tier models. Galaxy S7s were on track to set a new record for launch-year sales, it said.

“Looking ahead to the fourth quarter, the company expects earnings to improve (from a year earlier) driven by strong performance in the components business,” Samsung said in a statement.

“The mobile business expects a recovery in its earnings to a similar level with that of the fourth quarter of 2015.”

Samsung has already warned of another $3.1 billion hit to profit from the Note 7 withdrawal through the first quarter of 2017, all but guaranteeing a third straight year of earnings decline for the smartphone business.

As for what went wrong, Samsung still does not know what caused the fires in devices sent to customers as replacements for the initial 2.5 million Note 7s it recalled due to fire-prone batteries.

Co-CEO Shin said the battery might not be the only problem, suggesting the root cause may be more difficult to determine than had been hoped.

“The key is whether Samsung will be able to remove uncertainty surrounding Note 7 and maintain its leading position in the smartphone market,” LS Asset Management fund manager Kim Sung-soo said.

Samsung also said it was reviewing proposals by Elliott, which include a special 30 trillion won dividend. The company will respond to Elliott and announce its shareholder returns policy by end-November.