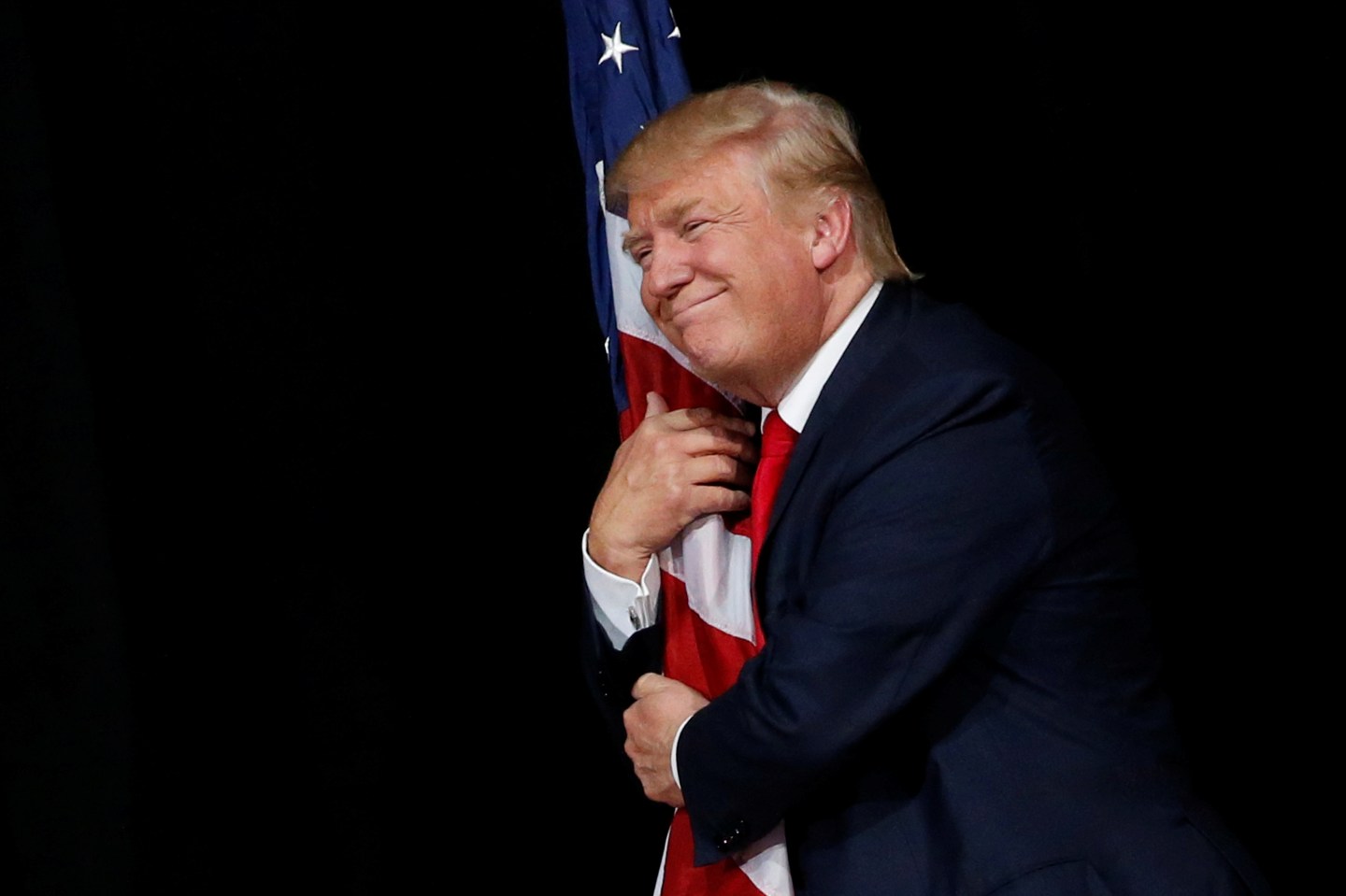 His presidential dreams increasingly in question, Donald Trump pushed his business empire to the center of his political campaign Wednesday. Taking a break from battleground states, he made the case at his newest hotel that all Americans should look to his corporate record for evidence of how well he’d run the country.

“Under budget and ahead of schedule. So important. We don’t hear those words so often, but you will,” said Trump, linking the hotel redevelopment—just blocks from the White House—to his promised performance as president. “Today is a metaphor for what we can accomplish for this country.”

Hillary Clinton agreed, but not the way he meant it. She used campaign events in Florida to attack the GOP nominee for having “stiffed American workers,” saying he built his empire with Chinese-manufactured steel, overseas products, and labor from immigrants in the country illegally.

“Donald Trump is the poster boy for everything wrong with our economy,” she told several thousand supporters in Tampa, Florida. “He refuses to pay workers and contractors.”

Trump’s political aspirations have long been deeply intertwined with promoting his corporate goals. He announced his campaign in the gilded lobby of Trump Tower in Manhattan and has held dozens of campaign events at his own properties. His remarks at his new Washington hotel, which has struggled to fill rooms amid the controversy surrounding his presidential bid, followed a visit Tuesday to his Doral golf course outside Miami.

Though the GOP nominee focused his remarks on his political message, the event was heavy with marketing, too. Standing under glittering chandeliers, top company executives, including his daughter, touted the hotel. And after his brief speech, Trump and his family headed to the hotel’s grand lobby where they cut a wide red ribbon with golden scissors before he flew to North Carolina for what his campaign billed as an urban policy speech.

In Charlotte, Trump unveiled what he billed a “New Deal for black America” in front of a mostly white crowd. Trump, who has struggled to earn the support of minority voters, bemoaned that “too many African-Americans have been left behind” and unveiled a handful of new proposals aimed at revitalizing impoverished urban areas.

They included new tax incentives for inner cities, new micro-loans for African-Americans to start companies and hire workers and a plan to reinvest money from suspended refugee programs in inner cities.

He also wants cities to be able to seek federal disaster designations to help them rebuild infrastructure, demolish abandoned buildings and invest in law enforcement.

As Trump cut the ribbon, Clinton was slamming his business practices in Florida, a state he must win to have any chance on Nov. 8. In Tampa, she was introduced by restaurateur Jose Andres, a naturalized U.S. citizen who pulled out of the Washington hotel to protest Trump’s anti-immigrant rhetoric. Trump and Andres are currently locked in litigation over the deal.

Trump’s unusual travel schedule, coming amid signs that the controversy surrounding his campaign has hurt his corporate brand, raises questions about whether the GOP nominee has begun to turn some of his focus to post-election plans.

Rooms at the overhauled $212 million hotel that bears his name at Washington’s Old Post Office Pavilion have been heavily discounted and smartphone data suggest fewer people are visiting his properties compared to rival venues nearby. A new Facebook live show produced by his campaign has heightened speculation that he may try and offset any losses with advertising revenue from a new a media network—a plan he denies.

Trump supporters defended his strategy, blasting critics for not making as big a deal of Clinton’s decision to attend an Adele concert Tuesday night. Trump took a break from campaigning to see the singer perform during the GOP primaries.

“I can’t take one hour off to cut a ribbon at one of the great hotels of the world? I mean, I think I’m entitled to it,” he said, in an interview with ABC News. He was more defensive in a CNN interview in which he called questions about his time away from swing state campaigning “insulting” and “rude.”

Clinton told reporters: “I was struck today that Donald Trump was paying more attention to his business than to the campaign. That’s his choice but we’re going to keep working really hard to reach as many voters as possible.”

Still, Clinton has turned some of her focus to what happens after Nov. 8, though her efforts assume she wins. Deep in transition planning, she’s also begun expanding the scope of her campaign to help down-ballot Democrats—her party sees an opportunity to win control of the Senate and reduce its deficit in the House—and retooling her campaign message to emphasize unifying the country after a divisive race.

Wednesday was the candidate’s 69th birthday, a milestone she started celebrating a day early on Univision’s entertainment news show “El Gordo y La Flaca,” where she was feted with a bottle of tequila and a large cake featuring her face. In her appearance on “The Breakfast Club,” popular with African-American voters, singer Stevie Wonder serenaded the woman he called “Madam President Clinton.”

Besides Utah, Pence also was stopping in the swing states of Nevada and Colorado before heading Thursday to solidly Republican Nebraska.

Trump, who also held a rally in the city of Kinston, continued to insist he knows more than the nation’s military leaders, especially when it comes to the fight against Islamic State militants in the city of Mosul.

“You can tell your military expert that I’ll sit down and I’ll teach him a couple of things,” he said in an interview with ABC.