The Trump Brand Is Losing Its Shine for Rich Consumers 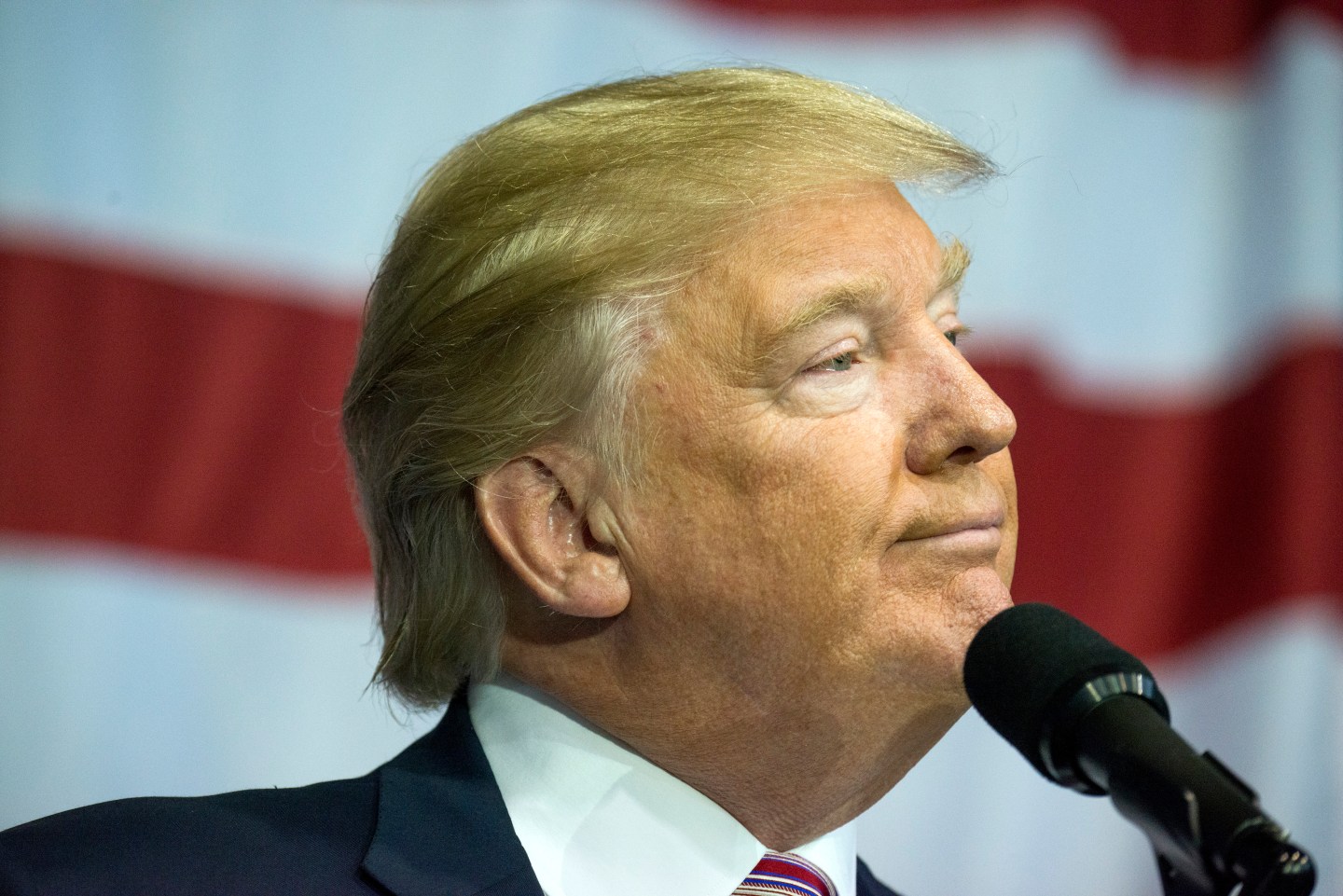 Event planner Beth Bernstein decided she had had enough with Donald Trump after his 2005 hot-mic boasts about groping women came to light earlier this month. She removed photos of weddings she had thrown at a Trump hotel in Chicago from her website, wrote to hotel staff to remove her from the list of “preferred vendors” and posted a sort of call to arms on her blog.

“I simply cannot bring myself to walk in the door there any longer,” wrote the owner of SQN Events.

Bernstein is not alone. Rates for rooms at Trump’s new D.C. hotel are being slashed as travelers weigh their options, and smartphone data suggest fewer people are visiting his properties compared to rival venues nearby.

The Republican nominee for president is in danger of losing not just the election, but something dear to a man who claims the marketing value of his name alone is worth $3 billion: the many customers, mostly wealthy, who have stayed at his hotels, played a round at his golf courses or held galas at his oceanside resorts.

Experts say the Trump brand is tarnished and at a tricky crossroads as his appeal shifts from the well-heeled, high-income people he has long courted to a more middle-class base, including the fervent fans he cultivated during the campaign.

There is speculation that he could start a Trump media network as a right-wing alternative to major news outlets, drawing money from advertisers to make up for any weakness in his empire elsewhere. But he may have to pivot fast.

“The current trajectory is very harmful to his businesses,” said Scott Galloway, a marketing professor at New York University. “Right now his brands cater to the affluent, who are disproportionately turned off by his activities.”

Ever confident, the business mogul has denied his campaign has dimmed the gilded allure of his five-lettered name and has said, if anything, it has burnished the brand and boosted his business. In a statement, Amanda Miller, vice president of marketing at the Trump Organization, said: “The Trump brand remains incredibly strong and we are seeing tremendous success across business units.”

That’s not clear, though, at Trump’s new hotel in Washington, which Trump has declared the “best” in the city. It appears to have gotten off to a slow start.

A room at the Trump International Hotel with a king size bed and a city view could have been yours any night of the week starting Nov. 14 for about $505 or $555, according to a check of the hotel’s website last week. By contrast, five major luxury competitors in the city generally charged more—sometimes hundreds of dollars more—or were sold out. For instance, the St. Regis only had rooms starting at $975 on Monday and Tuesday. The Four Seasons in Georgetown had no rooms available at any price for those days, and the Jefferson Hotel for those two days plus Wednesday.

Rates at the Trump hotel have continued to sink, too: By the end of last week, the price of many Trump rooms had been cut by 10% or more.

The managing director of Trump’s new hotel, which the candidate will formally open with a ribbon-cutting on Wednesday, disputes that it is struggling.

“With 10 years of experience with Trump Hotels, I can easily say the opening of Trump International Hotel, Washington, D.C., has been the most successful in terms of opening bookings, interest from groups and large events,” said Mickael Damelincourt in a statement. “The building itself is an American icon, and we’ve created a world-class hotel with the largest luxury ballroom in Washington, D.C.”

Some customers are clearly turned off by Trump’s derogatory remarks about women and immigrants, though, and the fallout is spreading beyond the hotels.

A woman angry about Trump’s groping comments, and that his daughter still supports him, has created the hashtag “GrabYourWallet” on Twitter to boycott the Ivanka Trump Collection, which includes handbags, shoes, jewelry and clothes. On Monday alone it was viewed more than half a million times.

Some charities, including the Susan G. Komen Foundation are considering moving events from Trump’s properties, including the Mar-A-Lago Club in Palm Beach, Florida. The U.S. Golf Association faces pressure from protests to move the 2017 U.S. Women’s Open from a course owned by Trump, although no decisions have been made.

It’s difficult to know how any future loss of hotel bookings and weddings, charity galas and tournaments could hurt Trump, because his businesses are privately held. But he is vulnerable because so much rides on his name. Unlike his golf courses, in which he has heavily invested, many Trump hotels and residential towers are owned by others who pay him to place his name over the entrance and for marketing and management services—and could possibly cut him out someday.

That’s already being threatened at Trump Place in Manhattan. A petition to remove his name from the building, which he does not own, has gotten 328 names in a few days. One of the signers, Marjorie Jacobs, said the pressure has already led to new uniforms for doormen and other staff, ones that will no longer bear the Trump name.

“He’s disgusting, and people are embarrassed to say where they live,” she said.

Brand Keys, a research firm that polled 1,536 registered voters nationwide, said Trump’s comments about groping women has sent the premium you can charge for something bearing the Trump name down sharply.

“How consumers feel about the brand and whether or not they’re more or less likely to engage with it has been affected,” said Robert Passikoff, president of Brand Keys. “People see a brand that had an image based on a glamorous lifestyle and a lot of money, and that is being been reevaluated by people.”

Foursquare, which tracks people’s locations via their smartphones, said share of foot traffic at Trump branded businesses is down since Trump started his run in June 2015. Prior to Trump’s presidential bid, foot traffic to his golf properties, hotels, resorts and other properties, both those owned by him and those just bearing his name, was steady year-over-year. According to its most recent data, share of foot traffic was down 19% in September, compared with 2014, before Trump announced his candidacy.

In a statement, Eric Danziger, CEO of Trump Hotels, a collection of more than dozen hotels, called the Foursquare data “manipulated” and “inconsequential,” and said it does not “provide an accurate representation of our performance.”

Not all the data point to a slowdown. After several big-name brands including NBC, Macy’s (M) and others severed ties in July 2015 following Trump’s derogatory remarks about Mexican immigrants, but there has been no similar high-profile exodus since.

And the home listing site Streeteasy compared prices for Trump-branded condos in 16 buildings in Manhattan to similar ones nearby and has found no evidence the brand has been damaged. In fact, Trump condos sold for 5.6% more in August than they did a year earlier, versus a drop for rivals.

Still, there’s evidence of a shift of Trump’s demographic base, from the affluent to the more aspirational middle class.

Will Johnson, an analyst at research firm BAV Consulting, which monitors brand perception for 3,500 brands, said that the Trump brand was “collapsing” among people with a household income of over $100,000 a year.

“He really has alienated the upper socioeconomic group and the data has consistently shown that he is down on pretty much all the metrics we measure,” Johnson said. “He’s low on trust and high on arrogance.”

On the other hand, his brand is resonating more among those who make less than $100,000 a year. During the first nine months of the year, among that group, there was a 21% rise in people who think Donald Trump “cares about customers” and a 14% increase in those who think he is a “visionary,” according to BAV.

Some say Trump could capitalize on that shift.

“In the short run, business gets damaged, but in the long run there’s a lot of opportunity with less aspirational brands that target the middle- and lower-class,” NYU’s Galloway said. “I think the Trump brand effectively dies in a Manhattan, but it thrives in some of the lower income, very red regions.”

One way to do that: start a conservative media network, as some analysts have floated.

“He could start the ultimate ‘bro’ news network that caters to his core constituency,” Galloway said. “He could out-offend Fox.”

One hurdle: He would have to get a major cable or satellite company to give him bandwidth, and there isn’t much to go around. He could launch on a smaller scale on social media using Facebook or YouTube.

The biggest test of the brand, of course, will come Nov. 8. National polls show Hillary Clinton with a clear advantage over Trump, and possibly winning even traditional Republican states such as Arizona.

“I think at some point, probably after he loses the election, that we’ll do a reevaluation of what the brand means and what the brand stands for,” Brand Key’s Passikoff said. “You can’t continue the kind of activities and have these revelations without significantly affecting how the people see the brand. The man and the brand are inseparable.”