With SF Lawsuit and NYC Bill, Tensions With Airbnb Are Coming to a Boil 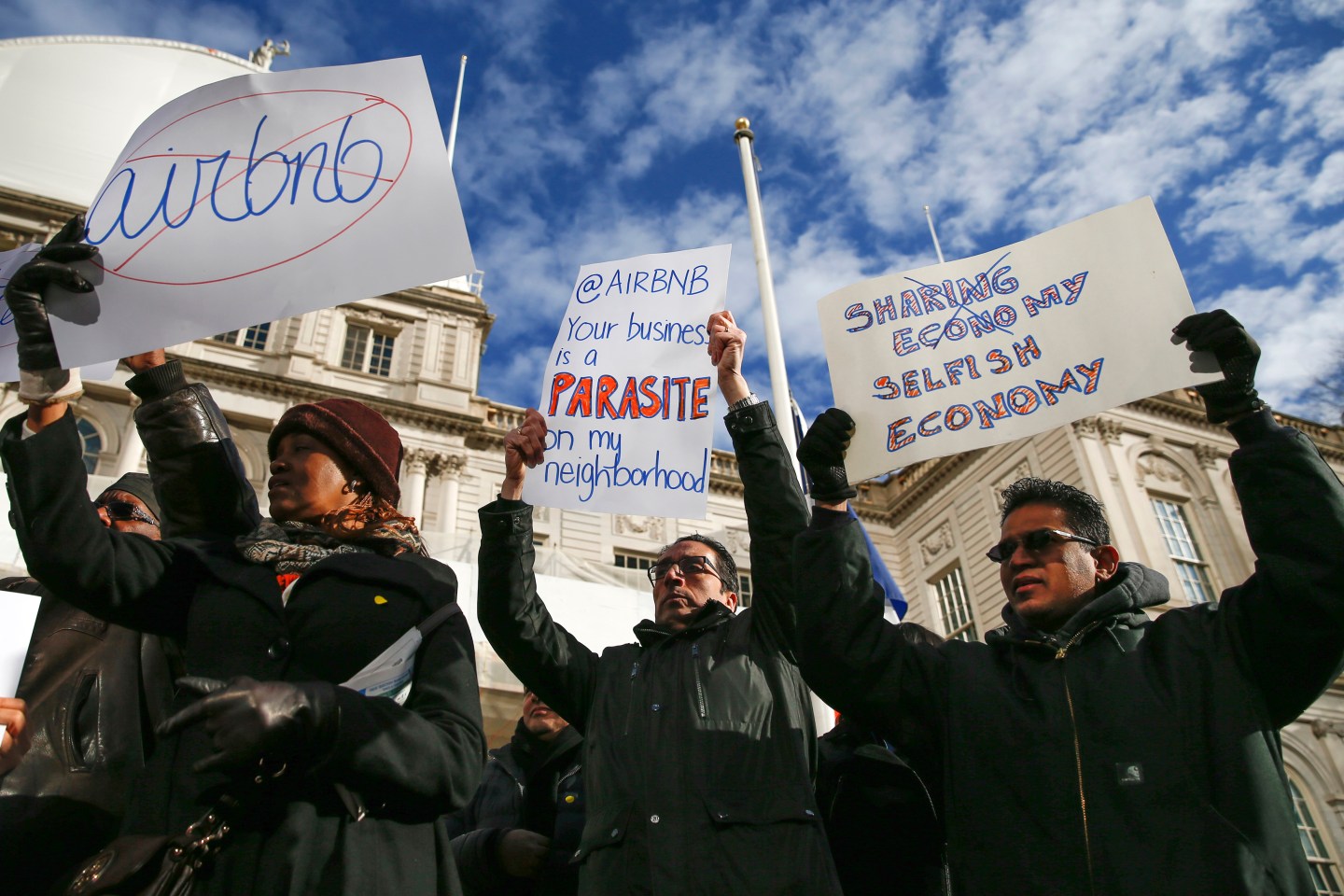 Airbnb, the online lodging service that investors now believe is worth $30 billion, faces a reckoning.

In eight years of torrid growth, the company has often clashed with local public officials seeking to minimize the impact of short-term rentals on neighborhoods and urban housing markets. Now, those simmering tensions are starting to boil.

The New York state legislature has passed regulations that Airbnb says could seriously damage its business in New York City, the company’s largest U.S. market; Governor Andrew Cuomo has until Oct. 29 to decide whether it will become law. The German capital of Berlin recently passed a law banning most short-term rentals, and Barcelona and Amsterdam are imposing steep fines for listings that violate laws there.

Ground zero for Airbnb’s fight against tightening regulations is its home of San Francisco, where the company has sued to block a new requirement that it reject booking fees from property owners who have not registered with the city.

The case is a crucial test of Airbnb’s business model. The company argues it cannot legally be held responsible for how landlords use its platform. If it is required to enforce local laws on short-term rentals, that could drastically reduce listings—and revenue—in some of its biggest markets.

Other cities looking to rein in Airbnb are watching the proceedings and looking to the city’s law as a potential model, said James Emery, deputy city attorney of San Francisco.

“Throughout the country, people representing cities have called me to ask what’s going on with the litigation,” he said.

Airbnb’s legal argument relies on a 20-year-old statute designed to protect free speech online, known as Section 230 of the Communications Decency Act. The company asserts in its lawsuit that San Francisco “impermissibly treats Airbnb as the publisher or speaker of third-party content” when it is merely a platform for communications between property owners and guests.

Other online marketplaces—such as Amazon (AMZN), eBay (EBAY), and Craigslist—have cited the same law to shield themselves from liability for any improper transactions among users of their services.

Airbnb has also sued the Southern California city of Anaheim, home to the Disneyland theme park, and the nearby beach city of Santa Monica, over regulations that the company contends are illegal.

Airbnb takes a cut of the revenue when a room or a home is booked and charges a service fee to guests. The company says it helps communities by enabling middle-class families to make extra money.

It also points to agreements with officials in nearly 200 locales around the world, mostly for tax collection and in some cases for broader short-term rental regulation.

Critics counter that, in popular tourist destinations, Airbnb takes affordable housing off the market, drives up home prices and disrupts neighborhoods with streams of transient visitors.

As regulatory threats loom, Airbnb on Wednesday announced it would create an online registration system for property owners and automate the enforcement of Airbnb’s existing rules in New York and San Francisco, which limit operators to a single listing of an entire residence.

“It’s preposterous. Maybe half their listings are illegal” in New York City, she said. “It’s part-and-parcel of the business model.”

Existing New York state law bars most urban apartment-dwellers from renting out their units for less than 30 days if they are not present.

The law recently passed by the state legislature would bar even advertising a rental that violates that existing law, which could help regulators crack down on Airbnb itself in addition to the users of its service.

Airbnb has said it will sue New York state if the governor enacts the law. The company said it has taken down nearly 3,000 illegal listings in New York City over the past year, and reports 44,622 total listings in the city as of Sept. 1.

In Berlin, Airbnb is fighting a city demand that it turn over information to help enforce a new law imposing fines of up $110,000 on people renting out more than 50% of their homes for less than two months—among the strictest regulations worldwide.

Airbnb is “confident it would find a favorable agreement” with the city,” said Peter Huntingford, Airbnb head of public affairs for Europe.

But with the city intent on collecting data and Airbnb intent on refusing, another legal battle looms.

“If Airbnb intends to risk a trial, we are prepared to walk down that path,” said Martin Pallgen, a Berlin Senate spokesman.

In Barcelona, Airbnb’s third-largest market in Europe, the city is imposing fines that exceed $65,000 for listings without proper licenses. Amsterdam city officials in April started scraping data from Airbnb and other short-term rental websites to root out illegal hosts because Airbnb will not turn over details on violators.

In its Wednesday announcement, Airbnb put forward what the company’s head of global policy and public affairs, Chris Lehane, called a “comprehensive regulatory strategy” targeted at “rooting out bad actors.”

But the new proposals stopped short of any commitments to share information or enforce bans on short-term rental operators, which many cities say is crucial for effective regulation.

Critics contend that a large portion of Airbnb listings are offered by commercial operators with multiple properties who are essentially running illegal hotels. The company, they argue, has effectively turned many residential neighborhoods into tourist zones.

In Los Angeles, a study by the pro-labor Los Angeles Alliance for a New Economy found that property owners with two or more listings generated 44% of all Airbnb revenue in Los Angeles.

Airbnb, in a statement, disputed that conclusion and called the group’s analysis “misleading.”

In New York City, the state Attorney General found that, between 2010 and 2014, more than 300,000 Airbnb reservations violated the law, representing about $304 million in booking revenue, with about $40 million of that going to Airbnb.

Public officials need to prioritize the rights of full-time residents over landlords and visitors, said Rosenthal, the New York Assemblywoman.

“I represent New Yorkers,” she said. “I don’t represent tourists, and my responsibility is not to protect their cheap deal at the expense of New Yorkers.”