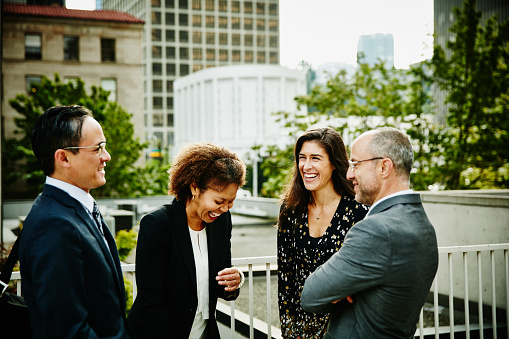 I will never forget the day in eighth grade that changed my life. I walked into my homeroom and my teacher said: “We are going to reassign all of the seating, but each of you are going to secretly submit the names of two people that you want to sit next to and two that you don’t.”

Through a series of unfortunate events, I discovered that almost no one wanted to sit with me. In retrospect I’m not surprised: I was a geek in an era before dotcom billionaires and superhero blockbusters, but what I lacked in social skills, I made up for in a love of science.

I thought that if I could apply scientific research, maybe I could make a friend or two. Now, 20 years later, I am a human behavior scientist and founder of the Influencers Dinner, a private dining experience attended by more than 800 influential people ranging from Nobel Laureates and award-winning actors to famous musicians and members of royalty.

Networking often means getting out of your comfort zone. Sometimes, you’ll find yourself in awkward situations. But, you could also make some of the most important relationships of your life. If you aren’t a natural born networker, that’s okay. You can look to science to help you navigate.

Here are a few techniques I’ve used to network and forge lasting relationships.

Famed Wharton professor and researcher Adam Grant examined three types of people: givers, takers and matchers. Givers help people without any expectation of getting something back; takers ask for favors without giving anything in return; matchers give as much as they take.

Developing a network and a successful community may be more a factor of generosity than previously imagined. So next time a stranger asks you for a favor, it might be a good idea to say yes. You might be more successful as a byproduct. Researcher and sociologist Mark Granovetter found that weak ties like acquaintances are 58% more likely to be the source of getting us our jobs than strong ties like friends. The idea of weak ties is even why LinkedIn has been a successful job network.

Just because you’re a giver doesn’t mean you can’t ask for favors. If you want to connect with somebody and develop trust, leverage the Ben Franklin effect. In his autobiography, Franklin shares a story of how he turned an adversary into a friend. Instead of pandering to him, he asked him for a favor. It turns out that doing a favor for someone will cause us to like them more or be willing to invest more time and effort into them.

Research suggests when you ask for favors, make sure that you stack them from small to large. By getting a small commitment from people it has them invest effort into your relationship having them see you as someone worthy of their time and attention.

Related: If You Can’t Answer This Question in 5 Seconds, You’re in Trouble

3. Don’t be so self-conscious.

Yes, throwing yourself into social situations may be uncomfortable. You’re going to mess up sometimes but, don’t worry about it. People probably don’t notice as much as you think they do. This was proven by a research study led by Thomas Gilovich and his students at Cornell University. The phenomenon known as the spotlight effect suggests that if there is something you are either insecure about or proud of, you will believe there is a spotlight causing other to notice, but in reality only a fraction of people you think will notice pay attention. Truth be told, people are probably to self occupied to notice you.

In the early ‘90s, George Loewenstein proposed something called the information gap theory, which explains what curiosity is and how it works. The idea is that when we are presented with new information, there will be a gap between our knowledge and the new information. If a gap is too big, we will find it intimidating (e.g. theoretical astrophysics). If the gap is too small, you will find it boring (e.g. “Hi, my name is Bob”). Curiosity is piqued somewhere in between. If the gap is the right size, it will draw people in and create curiosity. This curiosity will act as an itch that needs to be scratched, and may stick with us until the curiosity is quenched.

If you are meeting someone new try to create intrigue. When people ask, “Where are you from?” I respond, “I am from a small island in the northeast U.S. After a few seconds, I add, “Manhattan, have you heard of it?”

Each time you introduce yourself, look for ways to make it more engaging and interesting.

So what makes someone memorable? After all you don’t want to meet a thousand people and forget them. A large part of it has to do with novelty; things that stand out as different. Researchers Nico Bunzeck and Emrah Düzel found that a section of the brain known as SN/VTA responds to novelty and in proportion to how novel or different the experience is. Meaning, if you want to be remembered, find a way to stand out for the right reasons.

This can be the way that you dress, stories you tell, knowledge you share, or the questions you ask. I like to wear at least one thing that stands out, sometimes colorful pants in bright red or blue, or a cool accessory like a bowtie or suspenders. It not only functions as a conversation starter but it demonstrates that engaging with me will stand out.

Jon Levy is a behavior scientist best known for his work in influence, networking and adventure. He is founder of the Influencers Dinner and author of a new book called The 2 AM Principle: Discover the Science of Adventure, where he shares science and stories on how to live a fun and exciting life.