Clinton vs. Trump: Here’s Who Won the Last Presidential Debate 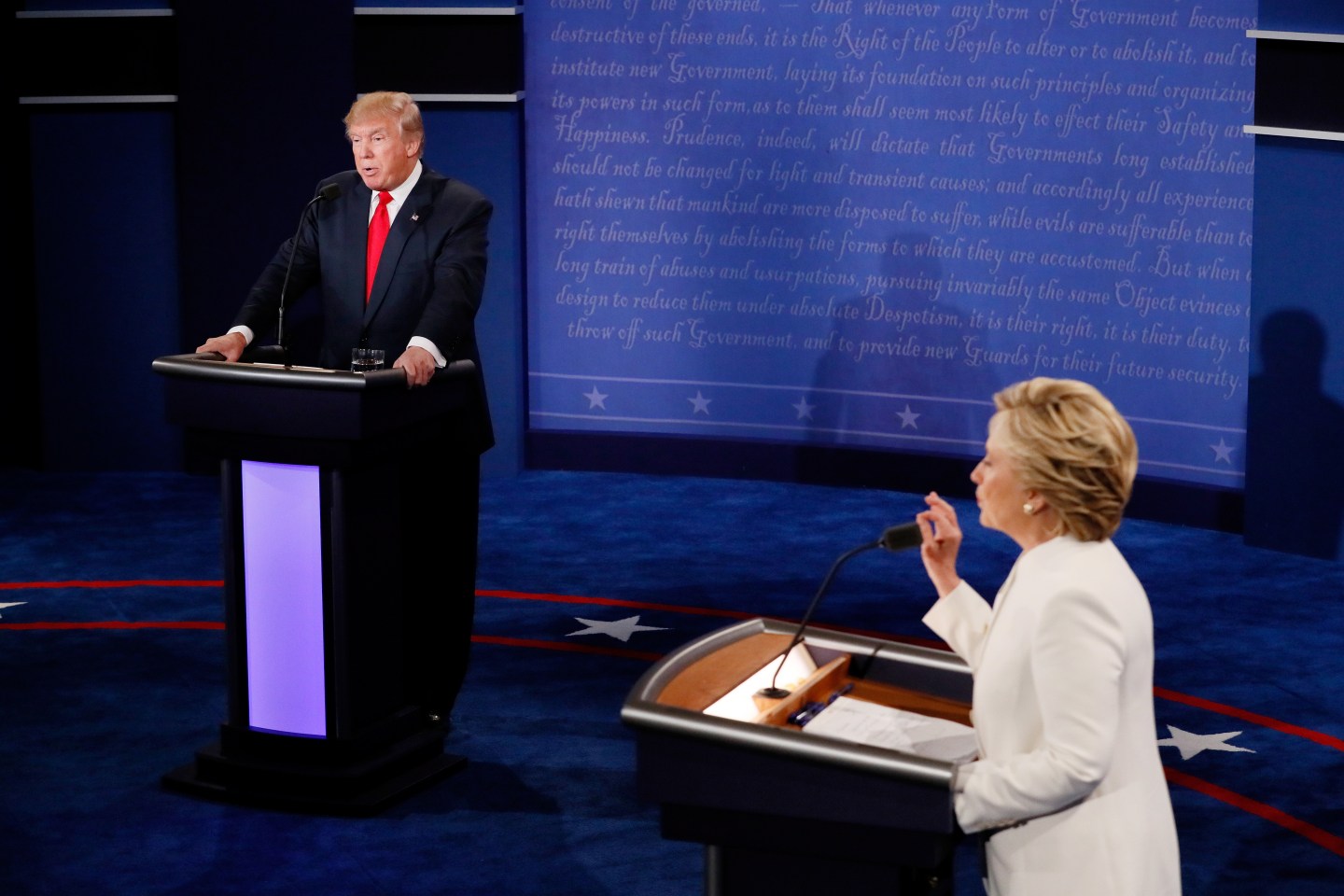 Donald Trump undermined what was otherwise his strongest debate performance by declaring in no uncertain terms that he won’t commit to accepting the results of the election.

In the third and final presidential debate, the Republican nominee needed a game changer to reverse a polling collapse that has many in his own party conceding the race is effectively over. Trump provided a big moment, spray-painting the night’s headline in Day-Glo. But it wasn’t the one his campaign would have written. “I’ll tell you at the time,” the candidate said of whether he’ll honor the outcome on Election Day. “I’ll keep you in suspense.”

The statement amounts to a stunning rebuke of the most basic democratic norms—including the peaceful transfer of power that’s been a hallmark of the American system of government since its founding.

Trump has spent the past week on the campaign trail ranting about a conspiracy he claims without evidence is already working to deny him the presidency. Both his vice presidential pick and, today, at Fortune’s Most Powerful Women Summit, his eldest daughter have proclaimed the GOP ticket will accept the voting results. Trump’s declaration from the debate stage in Las Vegas, however, couldn’t have been clearer, and it signals among other things that the candidate will not be curbed even by those closest to him as the campaign heads into its closing weeks.

What could be most frustrating for Trump’s supporters is that he turned in his most focused and arguably effective prosecution of Clinton’s record throughout the rest of the matchup. But the reality is that even a superhuman display of rhetorical dominance likely wouldn’t have been sufficient to meaningfully alter the trajectory of the race. Clinton is sitting on a 7-point national lead, a historically insurmountable advantage this late in the calendar, and one that’s reflected in swing states across the map breaking decisively in her favor.

As the final meeting between the two candidates, the Thursday debate in Las Vegas represented their last opportunity to make a closing argument before a huge national audience. By at least one measure, Clinton won: a CNN/ORC poll of debate watchers found the Democratic nominee beat Trump by a 13-point margin, 52-39. That represents a narrower edge than her wins in the two previous debates but significant nonetheless.

Contrasting with their first two encounters, the candidates started off relatively subdued. They clashed over the Second Amendment, abortion and immigration, but did so within the bounds of normal discourse. The debate took on a nastier tone, and sustained it thereafter, once the subject turned to Russia. Clinton challenged Trump to condemn Russian meddling in the election then called him a “puppet” of Russian president Vladimir Putin. “No puppet, no puppet,” Trump replied. “You’re the puppet!” Trump refused to accept the consensus view of U.S. intelligence agencies that Russia has been responsible for cyberattacks on Democratic organizations and operatives. And he went on to say Clinton has been “outsmarted” by Putin, “every step of the way” — praise for a brutal dictator he reprised later in the debate when he described Syrian ruler Bashar al-Assad as “just much tougher and much smarter than her and Obama.”

Clinton wore a Chesire grin throughout much of the debate, apparently satisfied to see Trump undercut his own arguments by snapping at her bait. But she didn’t prompt his statement about the election results. That came in response to a question from moderator Chris Wallace of Fox News about Trump’s recent claims the election is being “rigged.” Trump defended his position by pointing to what he called a corrupt media and his belief that Clinton “shouldn’t be allowed to run. It’s crooked — she’s — she’s guilty of a very, very serious crime,” he said, later adding, “She should never have been allowed to run for the presidency based on what she did with e-mails and so many other things.” Clinton called his comments about not accepting the election outcome “horrifying.”

Putting a fitting capstone on a face-off that went from restrained to vicious, Trump interjected toward the end of the debate, after an aside from Clinton suggesting he’d try to avoid paying any new taxes, by saying, “Such a nasty woman.”

Between barbs, the debate managed to cover a lot of policy ground. On the economy, Trump promised to renegotiate trade deals — including NAFTA, which he noted was signed by Clinton’s husband — that he blamed for jobs “being sucked out of our economy.” Clinton fired back that Trump’s critiques of outsourcing are hypocritical from a businessman whom she said has shipped jobs to twelve countries while using Chinese steel for his construction projects. Clinton said by contrast she will appoint a trade prosecutor to enforce the terms of any new pacts. “She’s been doing this for 30 years,” Trump replied. “Why the hell didn’t you do it over the last 15, 20 years?” He continued that Clinton has an experience advantage over him, “but it’s bad experience, because what you’ve done has turned out badly.”

That was a line of attack Trump deployed in their first debate, and Clinton was ready with a lengthy answer that compared her history of public service chronologically with his career as a developer-turned-reality star, that culminated with her pointing out that he was hosting “Celebrity Apprentice” on the day she monitored the special forces raid that killed Osama Bin Laden. “I think I did a better job,” Trump said, “I built a massive company.”

Later, Trump made a comment that could have revealed more than he intended about where he thinks the race stands. Surveying the damage he said that Obama and Clinton’s foreign policy has wrought, he said, dripping with sarcasm, “And wait until you see what happens in the coming years. Lots of luck, Hillary. Thanks a lot for doing a great job”