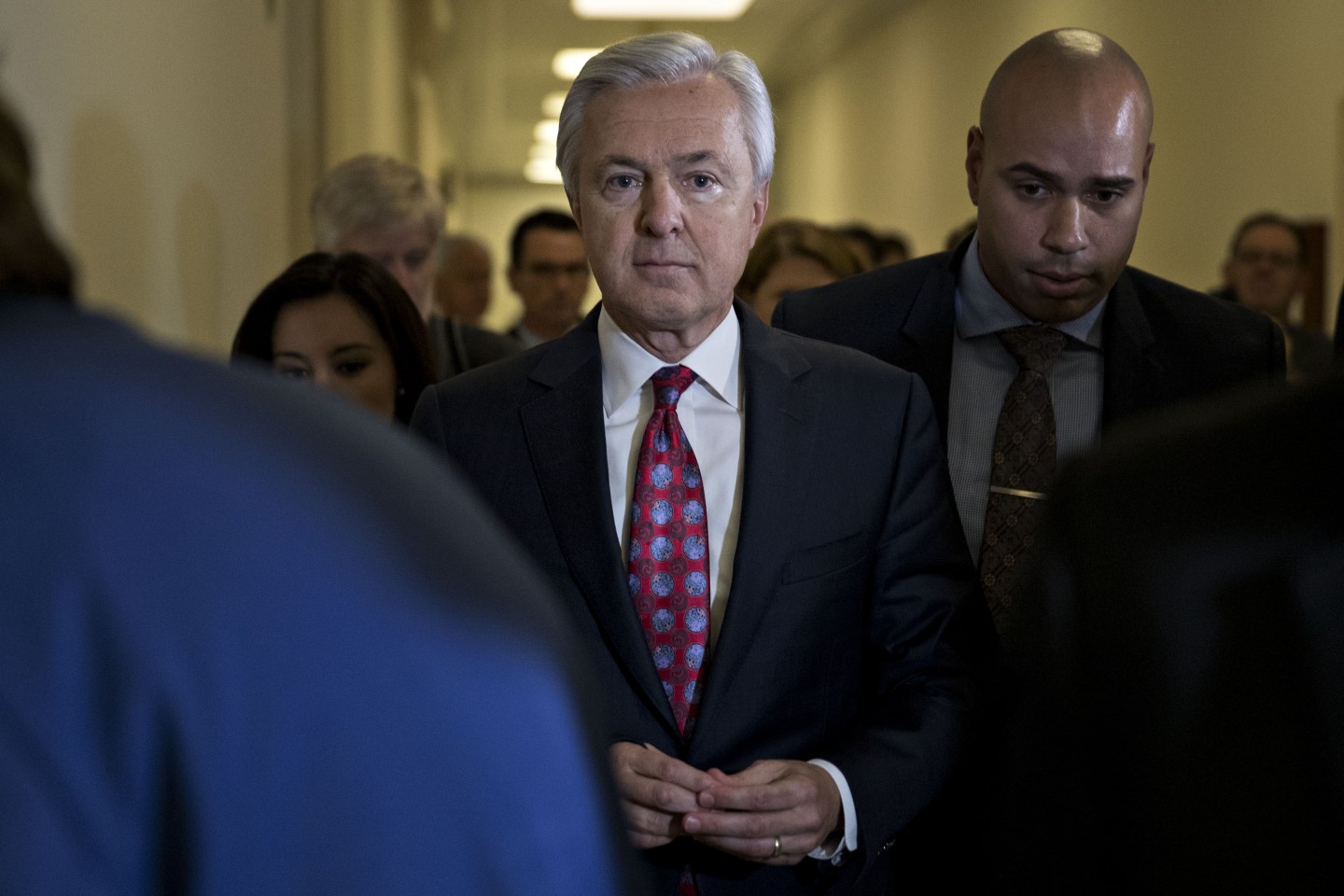 John Stumpf, chief executive officer of Wells Fargo & Co., walks through the Rayburn House Office building after a House Financial Services Committee hearing in Washington, D.C., U.S., on Thursday, Sept. 29, 2016. Stumpf, fighting to keep his job amid a national political furor, will forgo more than $41 million of stock and salary as the banks board investigates how employees opened legions of bogus accounts for customers. Photographer: Andrew Harrer/Bloomberg via Getty Images
Bloomberg via Getty Images

Former Wells Fargo CEO John Stumpf and other members of Wells Fargo’s upper management might have known about the widespread fraud at the company years before they have claimed.

A new letter obtained by CNNMoney suggests that at least one Wells Fargo (WFC) employee may have tried to alert Stumpf to the issue back in 2007.

The former employee, unnamed in the letter and the CNNMoney article, wrote that he or she had been transferred after warning supervisors of “unethical (and illegal) activity activity to Wells Fargo Regional Bank.”

“In Northern California’s Greater Bay Region, the activity is widespread and so highly encouraged that it has become a normal sales practice,” the September 2007 letter warned. “Left unchecked, the inevitable outcome shall be one of professional and reputational damage, consumer fraud, and shareholder lawsuits, coupled by regulatory sanctions.”

The employee, who had worked at Wells Fargo since 1992, eventually won a federal whistleblower retaliation lawsuit against the company in 2008. The employee filed the lawsuit in February 2007, according to the letters.

“I am not a traitor, I am not impetuous, I am not some hyper-malcontent,” the letter read.

“[I]n the absence of more specific details, we were unable to determine the existence of the referenced letters,” a representative for the bank, Richele Messick wrote in an email Tuesday. “But, in general, letters received by John Stumpf would have been forwarded to the appropriate channel for review, investigation and response.”

That comes after investigations found that Wells Fargo has created some 2 million phony accounts between 2011 and 2015, leading 5,300 employees to get fired, executive clawbacks, and Stumpf’s sudden “retirement.”

Under oath before Senate in September though, Stumpf maintained that he was unaware of the account problems until 2013.

Former Wells Fargo employees have come forward in light of the scandal to say that the practice of creating fake accounts had been around since before 2011. Others have recalled attempts to alerted their higher ups about the fraudulent accounts—but were left with a black mark.

A former Wells Fargo personal banker identified as just “Ashley” by NPR’s Planet Money, tried to alert her supervisors about the unwanted accounts. She eventually began to refuse to meet her quotas. When she did, her higher ups warned her it would go on her personal record, making it very difficult for her to gain another banking job.

After she was fired from Wells Fargo, Ashley couldn’t find another job in banking. She later discovered that Wells Fargo had written her up on a form U5, saying that she had failed to perform job duties. The form would have been seen by all banks considering her for a position.

Stumpf is walking away with roughly $133 million.

Several U.S. district attorneys offices, the U.S. House of Representatives, and the U.S. Senate have each opened up investigations into the account scandal. Wells Fargo’s board of directors has also launched its own independent investigation into the sales practices.