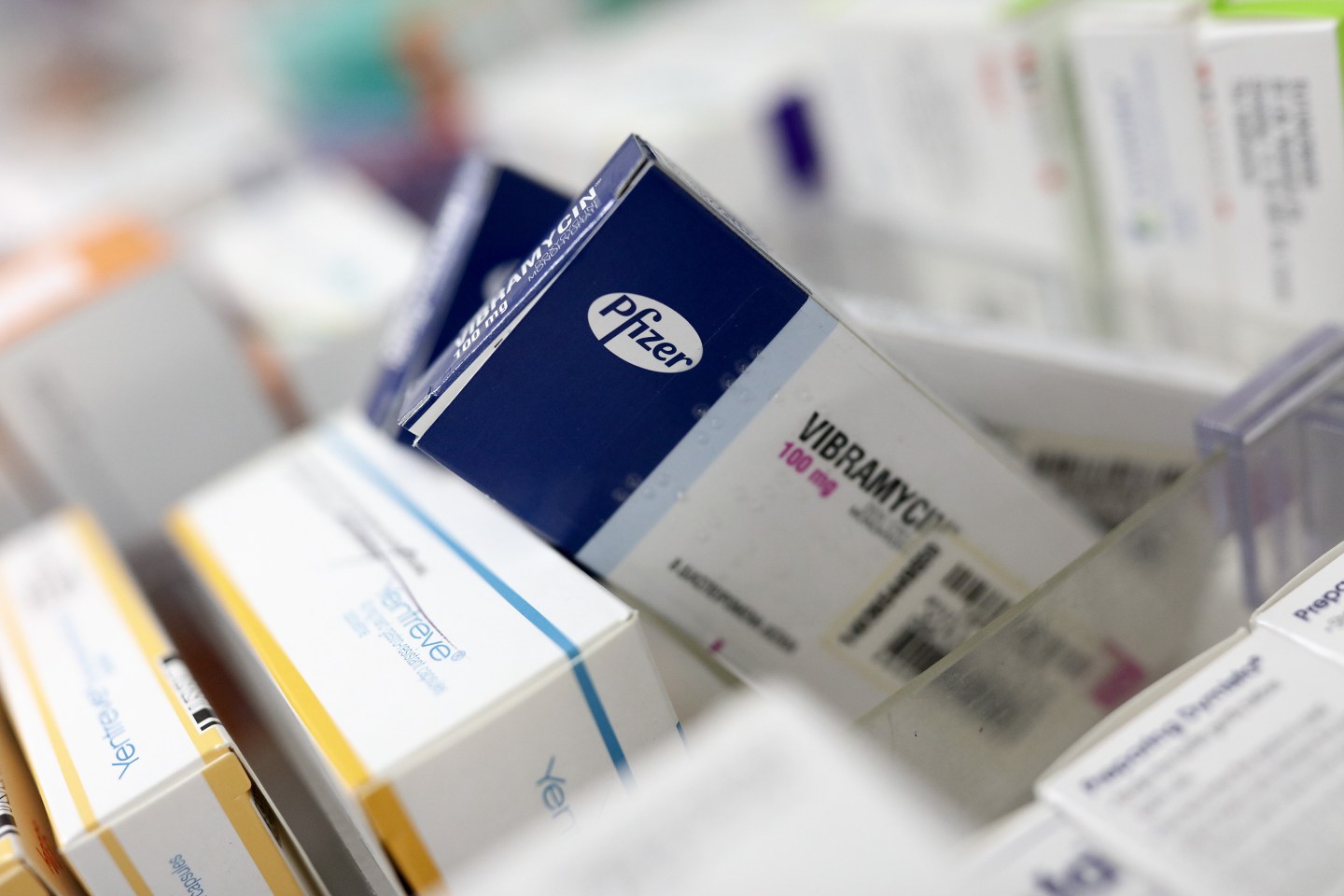 The Pfizer company logo sits on packaging for Vibramycin, an antibiotic tablet, produced by Pfizer Inc., on a pharmacy's shelf in this arranged photograph in London, U.K., on Monday, Dec. 14, 2015. European pharmaceuticals stocks in 2015 have outperformed the Stoxx 600 Index by 1.2 percentage points in U.S. dollar terms. Photographer: Simon Dawson/Bloomberg via Getty Images
Photo by Simon Dawson/Bloomberg via Getty Images

Insurers and health care providers had hoped a new class of medicines called biosimilars would keep a check on high drug prices and reduce health spending in America. As it turns out, that may not be the case.

Biosimilars, which are copycats of pricey biologic drugs, are still very new to the U.S. market. Just three such treatments have been approved by the Food and Drug Administration (FDA)—the first one winning clearance in 2014—and there are still open questions surrounding the regulatory pathway for the therapies that present headwinds for drug makers.

But the early biosimilar pricing data hasn’t been particularly encouraging from a cost-cutting standpoint. On Monday, pharma giant Pfizer (PFE) announced its copy of Johnson & Johnson’s (JNJ) best-selling anti-inflammatory drug Remicade, a $5 billion per year treatment, will hit the U.S. market in late November at a 15% discount to the branded product. The company had reportedly mulled a 20-30% price cut after Inflectra’s approval. (The discount doesn’t include further rebates issued to insurers and benefits managers.)

The 15% reduction isn’t anywhere near the savings biosimilars provide in other countries, where they’ve been available for nearly a decade. For instance, Remicade biosimilars in Europe have been sold at 45% and even higher discounts compared to the original drug, helping draw enormous market share away from the therapy in countries like Norway.

Such an outsize effect is unlikely to occur in the U.S. given the relatively modest price advantage, and the fact that Inflectra can’t be automatically substituted for Remicade.

“Inflectra’s 15% discount should provide enough of an incentive to help attract new patients to start on Inflectra, but probably won’t be enough of a discount to entice stable patients to switch over,” wrote J.P. Morgan’s Michael Weinstein in an analyst note.

Pfizer argues that the discount level is appropriate and can’t be compared on an apples-to-apples basis with the costs in other countries. “The price of biosimilars and discounts relative to the respective reference products in Europe varies among countries, since prices are set according to local regulations and pricing systems,” said a company spokesperson in an emailed statement. “In addition, the competitive environment varies across markets depending on a number of factors.”

The spokesperson went on to say that Inflectra will ultimately “provide significant cost savings to the U.S. healthcare system.”

For now, though, it appears that initial estimates from analyst groups like the RAND Corporation projecting more than $44 billion in direct reduced drug spending thanks to biosimilars may be optimistic. Novartis’ Zarxio, the first approved U.S. biosimilar, was also priced at a 15% discount to its branded counterpart. Some insurance companies and pharmacy benefits managers have noted the discounts may wind up being even more paltry since biopharma firms have been raising the prices of their biologics in anticipation of biosimilar competition, according to the Wall Street Journal.

Pfizer must clear a number of hurdles before Inflectra can take flight, including an ongoing patent spat with Johnson & Johnson over its copycat.