Stein Brings Activism, but No Wins, to Outsider 2016 Contest 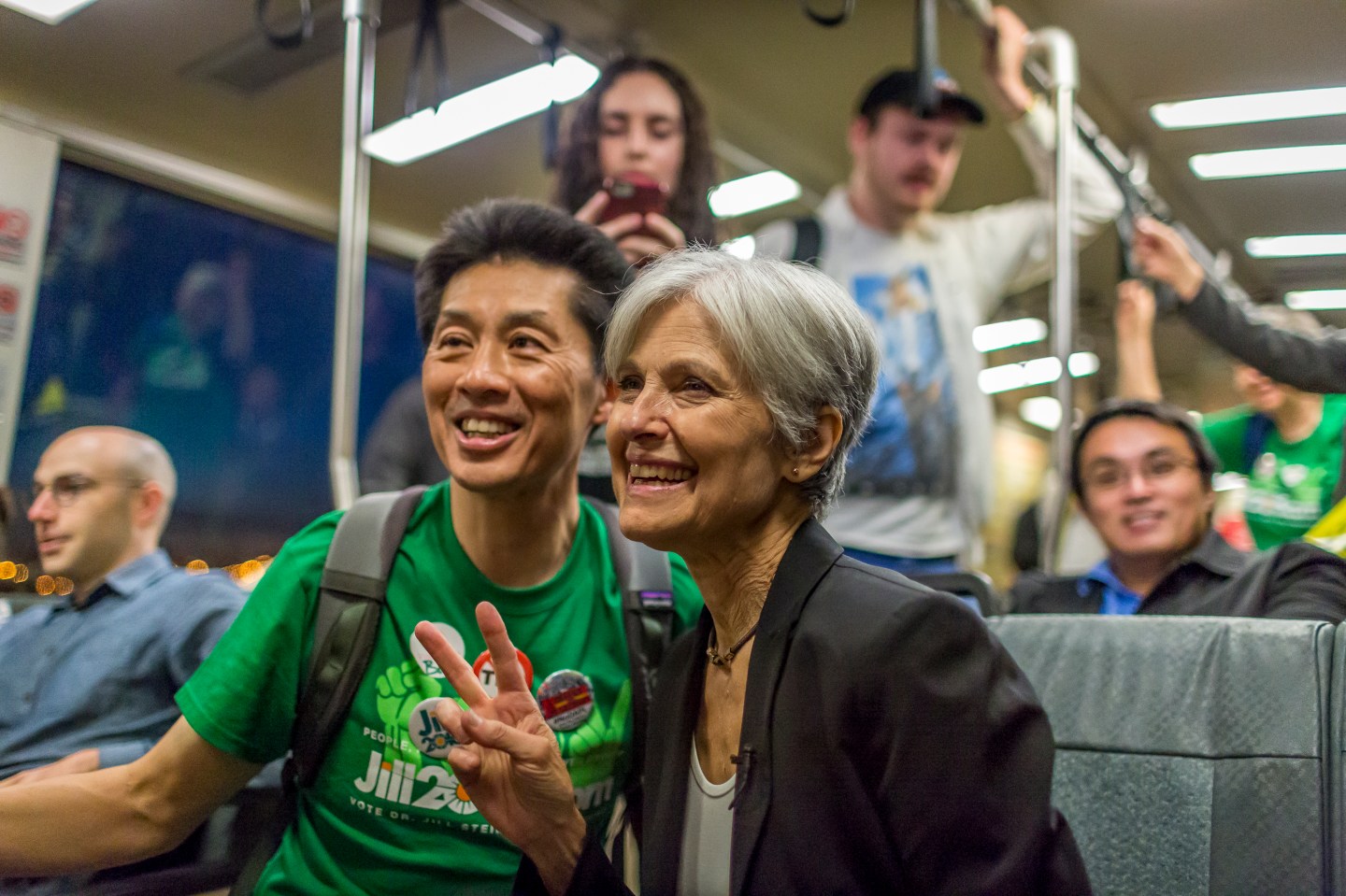 Little more than a blip on the radar screen for a dozen years, Stein saw a fresh opportunity to woo progressives, climate activists and young radicals when Sanders left the race and threw his support behind Hillary Clinton. She’s worked to build on that momentum since, but has been largely unable to draw crowds quite matching the throngs of angry voters that flocked to her outside the Democratic National Convention.

“Democracy needs a moral compass. It needs our vision, it needs our values—it doesn’t need our silence and our fear,” she said to a rally of several hundred last week in California.

Stein is, in many ways, further left than Sanders. She’s pledging to wipe out student debt entirely and to create a wartime mobilization of resources to move the United States toward 100 percent renewable energy by 2030. But Stein has no experience in elected office and downplays the difficulty of working with an entity like Congress to pass her dramatic policy initiatives.

Stein, 66, is a doctor by training who has only ever been elected as a town meeting member in Lexington, Massachusetts — a position requiring a few hundred votes. She lost races for Massachusetts governor in 2002 and 2010, state representative in 2004 and Massachusetts secretary of state in 2006. In her 2012 presidential bid, she couldn’t crack 500,000 votes.

Stein acknowledges she’s not really hoping for a win. Instead, she wants to continue to build the legitimacy of the Green Party. If she wins enough votes, she can help keep the party on state ballots. If she manages to crack 5 percent, a tall task at this point, the party will be available for more public funding.

“The more powerful we are in this election, the more votes we get, the greater the chances of averting this catastrophic future that is being pursued by the both the Democratic and Republican Party,” Stein told The Associated Press.

Not all self-proclaimed progressives support her approach. John Fetterman, a Pennsylvania mayor who unsuccessfully ran for the state’s Democratic Senate nomination on a Sanders-like platform, said Trump is too dangerous — and Stein too inexperienced — to vote for anyone other than Clinton.

“She has run a sad campaign,” Fetterman said of Stein. “If you’re going to wade in in the public interest, or at least under that auspice, it’s at least incumbent on you to have experience, competence and an actual path.”

Stein was a practicing doctor, focusing on internal medicine in young adults, before she began her foray into activism. Born in Illinois, Stein stayed in Massachusetts after graduating from Harvard Medical School in 1979. Her husband, Richard Rohrer, is also a doctor, and they have two sons, ages 30 and 33.

In the 1990s, Stein joined the movements to regulate Massachusetts’ “Filthy Five” coal plants and reduce mercury exposure in the food supply. Activists in the movement say Stein’s medical background was critical as she testified before legislative panels on the damage of mercury and other pollutants to child brain development.

“She was a known expert on the scene and also very concerned about these issues, and so she was very eager to help make the health case for reducing pollution,” said Cindy Luppi, New England director of the Clean Water Action and Clean Water Fund and someone who worked with Stein in the 1990s.

Stein’s activism eventually led Massachusetts’ Green-Rainbow Party to tap her to run for governor in 2002. Stein, who long viewed politics as a corrupt business, took the offer, realizing that gaining political stature could be an effective way to mount change. At the time, Stein was also fighting for campaign finance reform and single-payer health care.

“There was just this feeling that, as advocates, we were being blocked at every juncture,” Stein said. “I said, everything else is failing, might as well try electoral politics.”

Presidential Debate: Here’s Who Won the Second Round

Not everyone in the environmental movement agreed with Stein’s approach. Lynn Nadeau, a fellow anti-coal activist, said she felt Stein’s idealism sometimes got in the way of achieving practical goals.

“By the time she ran (for governor) in 2010, I was disgusted with her lack of insights and groundedness in practical reality,” Nadeau said in an email. “Obviously she didn’t listen to me and continues in her quixotic venture.”

But more than a decade after her first run, Stein and her supporters see her continued pursuit as necessary in the face of dire times. She’s offering an urgently pessimistic view of America’s future, warning that a Clinton presidency could lead the nation into nuclear war and that the looming dangers of climate change are worse than World War II.

“There is not a future here for our younger generation—nor for the rest of us,” Stein said. “We need to stand up and fight with every ounce of our energy.”

These Voters Were Seriously Turned Off By the ‘Cringe-Worthy’ Debate

Yet she also seems to believe that being president would not be that hard, telling the Washington Post recently that the job isn’t “rocket science.” She’s largely failed to acknowledge the difficulty of pushing through some of her programs.

But to Stein and her backers, the practicality of the ideas may not be the point. Right now, it’s more about spreading a message.

“Jill’s attitude is that the real wisdom in this country and the real integrity doesn’t lie inside the halls of the politicians elected with dirty money,” said John Andrews, a Massachusetts Green-Rainbow Party member who has been with Stein since 2002. “It is out in the streets, it is out with people who know that the system is rotten, know that it’s rigged.”