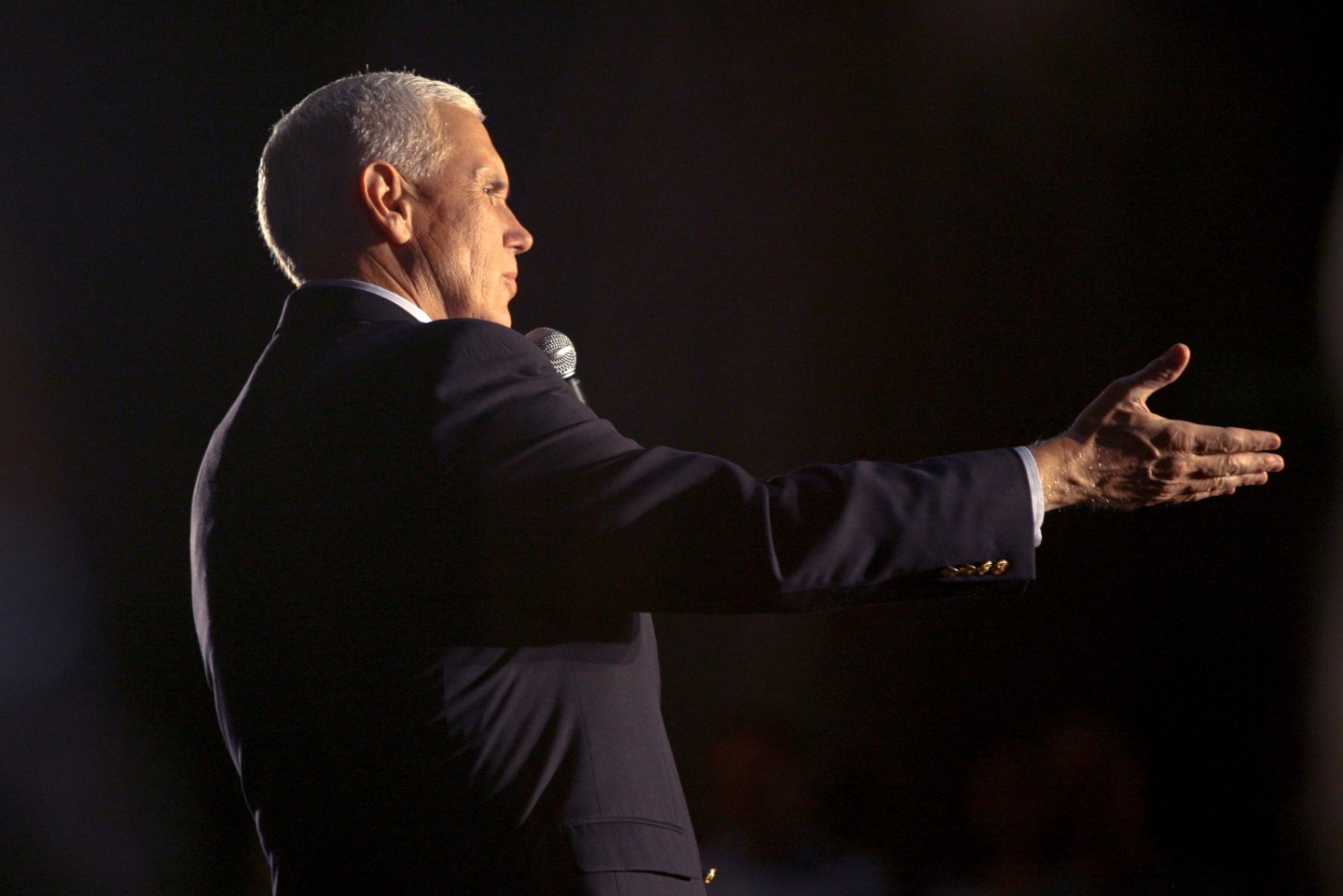 Republican vice presidential nominee Mike Pence emerged Monday after a weekend out of the public eye reaffirming his relationship—awkward as it may seem—with Donald Trump.

But even as Pence struggled to clean up a disagreement with Trump on Syria, the Indiana governor—a devout Christian—tried to put Trump’s obscene remarks about women behind him. Importantly, Pence noted, Trump had apologized.

“We all fall short of the glory of God,” Pence said during a campaign rally in Charlotte, North Carolina. “I believe in forgiveness.”

Pence was referring to the Friday afternoon publication by The Washington Post of a story about a 2005 video in which Trump is recorded bragging about groping women without their permission. Pence released a statement refusing to condone or defend Trump’s remarks. He urged Trump to “show what is in his heart when he goes before the nation” during Sunday’s debate.

Trump said at the beginning of the 90-minute showdown with Clinton: “I apologize to my family. I apologize to the American people. Certainly, I’m not proud of it. But this is locker-room talk.”

Then Trump turned to former President Bill Clinton, whom he called “far worse.”

“Mine are words, and his was action,” Trump said, referring to the former president’s highly publicized infidelity 20 years ago. Even some Republicans questioned Trump’s level of contrition.

Trump’s debate performance got mixed reactions, but it was good enough to earn the Republican presidential nominee a congratulatory tweet from his running mate.

Congrats to my running mate @realDonaldTrump on a big debate win! Proud to stand with you as we #MAGA.

By Monday, Pence was personally praising Trump during his event in Charlotte.

“It takes a big man to know when he’s wrong and to admit [it],” Pence told the audience. “Donald Trump last night showed he’s a big man.”

Pence Monday also tried to smooth out Trump’s contention during the debate that he and his running mate didn’t agree on U.S. military policy in Syria. Pence had said six days earlier that he and Trump supported so-called safe zones for refugees fleeing violence in the civil war, but that the U.S. should also be prepared to conduct military strikes on Russian-backed Syrian government targets to protect innocents trapped in the city of Aleppo.

“We haven’t spoken and I don’t agree,” Trump said during the debate.

Pence told Fox News Monday that moderator Martha Raddatz “mischaracterized” his position. In fact, she quoted Pence verbatim from the Oct. 4 vice presidential candidates’ debate, where he made the claim.

Still, Pence’s comments Monday dismissed any doubts he would remain on the GOP ticket, a very open question during 48-hour stretch after Trump’s 2005 remarks about women were reported. Almost immediately after the report was posted, Trump cancelled what was to be his appearance with Pence, House Speaker Paul Ryan, Wisconsin Gov. Scott Walker and Wisconsin Sen. Ron Johnson. Trump initially said Pence would speak for him. But then Pence cancelled, too.

Pence Monday specifically rejected on Monday the idea that he had weighed quitting the ticket.

“It’s absolutely false to suggest that at any point in time we considered dropping off this ticket,” Pence said during an interview on Fox News Chanel, adding, “It’s the greatest honor of my life.”