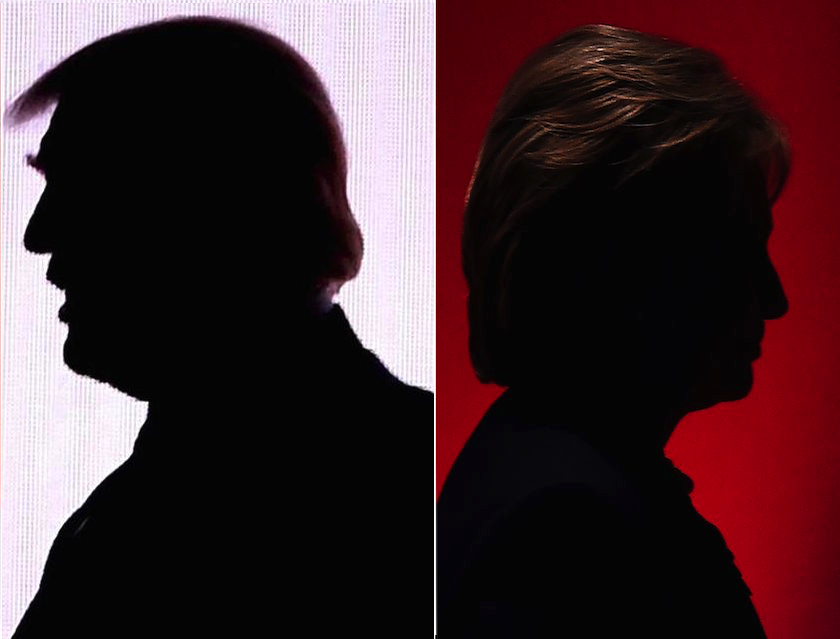 Hillary Clinton and Donald Trump’s tax plans are “mirror images” of one another, with the Democrat proposing steep tax hikes on the wealthy while the Republican candidate proposes even deeper reductions in the taxes paid by America’s richest people, according to an analysis released Tuesday.

The Urban-Brookings Tax Policy Center found that the top 0.1 percent of taxpayers would pay $800,000 more in taxes on average under Clinton’s plan while Trump’s plan, their taxes would decline by more than $1 million. It found that Trump’s proposed cuts would cost $6.2 trillion over 10 years while Clinton’s would raise $1.4 trillion in new revenue over that time period — money the Democrat proposes using for new government programs.

“Trump has a very, very large tax cut that’s primarily focused on high income individuals. Clinton has a significant tax increase” for those people, said Len Burman, a former Treasury official under President Bill Clinton who is director of the center, a joint project between two nonpartisan Washington, DC think tanks. “In almost every meaningful respect these plans are mirror images.”

The analysis does not account for the possible economic effects of the tax plans, but the authors nonetheless predicted that Trump’s plan would cut into the economy by by running up large deficits that cause interest rates to soar. The Trump campaign said the analysis is worthless because it lacks critical calculations.

By contrast, an analysis by the Tax Foundation, which advocates for lower taxes, found Trump’s proposal could create $2 trillion in new tax revenues by triggering growth. But even that analysis found it would leave a net deficit and that more of its benefits would accrue to wealthier taxpayers.

The Tax Policy Center’s new analysis found that Trump’s proposals would focus on reducing tax on capital, which would encourage more work, investment and savings. It said Clinton’s proposals could have the opposite effect by hiking up levies on capital. However, the analysts noted that Clinton has proposed new spending that could offset some of the negative economic impact of high-end tax increases.

Clinton’s tax hikes would fall almost exclusively on businesses and taxpayers in the top 1 percent. The analysis found that some of the cuts in the plan — including a doubling of the child tax credit the Clinton campaign announced Tuesday morning — could lead to a 1 percent increase in income for the poorest 20 percent of U.S. households.

By contrast, Trump would cut taxes for most, but not all, Americans. The analysis found Trump would cut the average tax bill by $2,940, or 4.1 percent. But those in the top 0.1 percent would have their bill reduced by 14 percent, or $1.1 million.

Because of the way it changes standard deductions, the Trump proposal would actually raise taxes for an undetermined number of middle-class and lower-income households that have many children or are headed by a single parent, the analysis found.

Both candidates propose eliminating the carried interest provision of the tax code that allows hedge fund managers and others to be taxed at lower rates. But the Trump plan would open up a bigger loophole by allowing business partnerships like hedge funds to pay an even lower 15 percent corporate rate. In fact, the Tax Policy Center predicts that many high-paid individuals would essentially incorporate as freelance employees so they could pay 15 percent on their earnings, rather than Trump’s top rate of 33 percent.

That “gives them a much better deal than carried interest,” said Eric Toder of the Tax Policy Center.

The Trump campaign has insisted it will create safeguards to ensure this does not happen, but has not explained how.

Overall, Clinton proposes a new 4 percent tax on earnings over $5 million, requiring people earning over $1 million annually to pay at least 30 percent of their income in taxes and face new limits on non-charitable deductions and exclusions. She’d double the Child Tax Credit, currently $1,000 per child under 17, to $2,000 per child under 4, and increase the amount low-income families get in refunds. She’s also proposed hiking capital gains taxes as well as increasing the estate tax on large inheritances to 65 percent.

Trump proposes consolidating the seven federal income tax brackets to three — at 33 percent, 25 percent and 12 percent — and creating a flat 15 percent corporate tax. He’d cap deductions at $200,000 per household, allow families to deduct the cost of child care and elder care and eliminate the estate tax. Trump, like Clinton, would still tax capital gains at death before they are passed onto heirs.