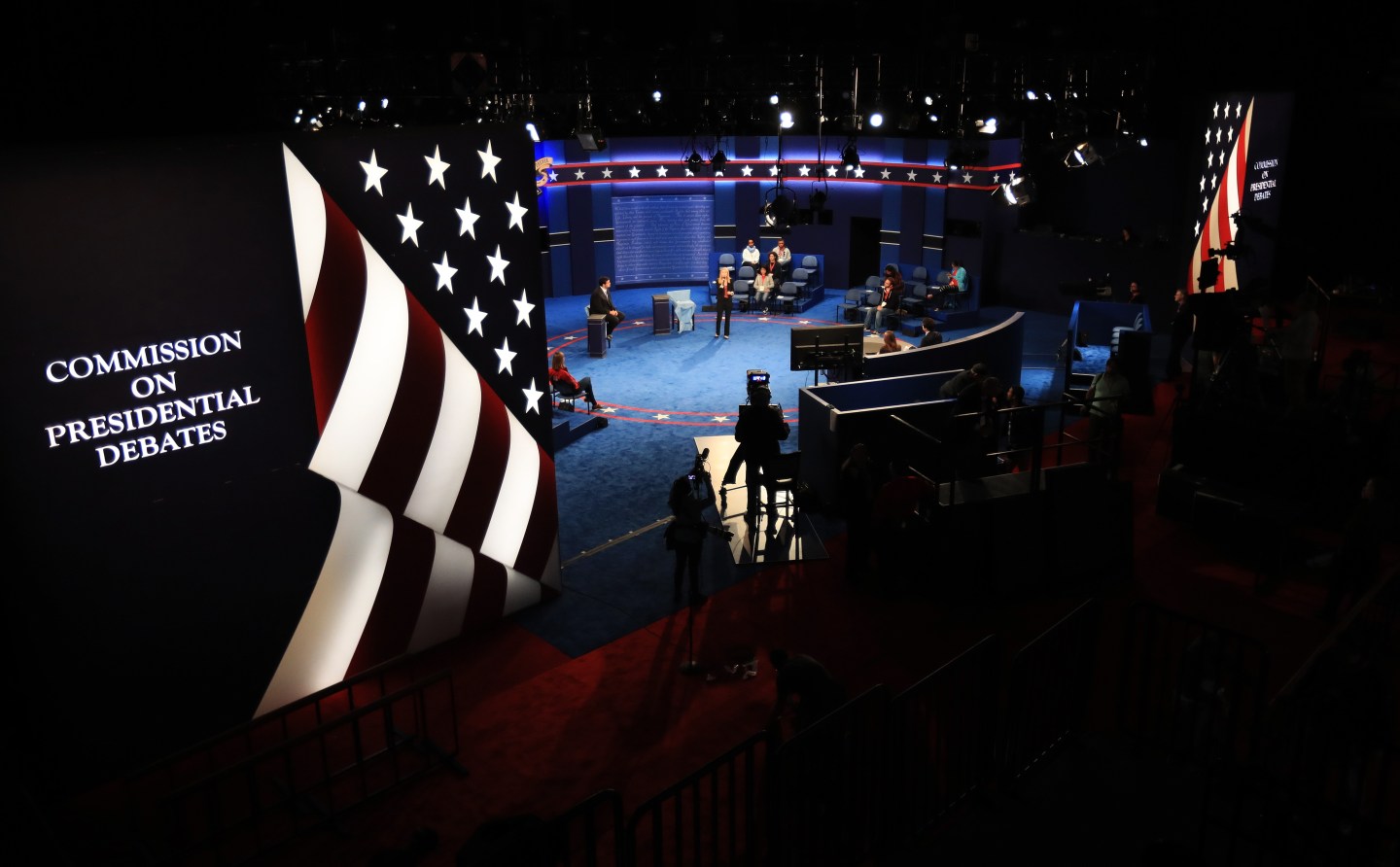 Donald Trump was in deep trouble before vulgar footage surfaced Friday of him boasting of groping and attempting to seduce married women. The Republican nominee’s poll numbers have plunged since his shellacking in the first presidential debate.

Now trailing Hillary Clinton in nearly every swing state, he is being outspent on the airwaves and out-organized in the field. Just 30 days from the Nov. 8 election, a growing chorus of Republicans are calling on him to quit his White House bid over the video.

All of which makes Sunday night’s showdown with Hillary Clinton a do-or-die moment for his faltering White House bid—and a dangerous one for both him and Hillary Clinton.

This second debate, held at Washington University in St. Louis, may be the last best chance for Trump to make his case to millions of Americans. Early voting is underway. His campaign is in crisis. A repeat of his rocky performance in the first contest with Clinton could prompt party allies to abandon him in hopes of salvaging their Senate majority.

For more on the second debate, watch:

And yet if the debate is a must-win, Trump almost seemed to be trying to lose it, even before the 2005 tape was released Friday. He resisted a push by his aides to hold mock debates designed to refine his techniques. Instead, as for the first debate, he preferred to prep with informal conversations, while Clinton hunkered down to cram.

If Trump’s challenge Sunday night wasn’t tough enough, the format of the event presents an additional hurdle. The 90-minute debate will be town-hall style. Half the questions will be posed by moderators Anderson Cooper of CNN and Martha Raddatz of ABC News. The other half will be posed by members of the audience, a group of uncommitted voters selected by the polling company Gallup.

Town halls can be tricky for any politician—just ask George H.W. Bush, whose efforts to telegraph empathy in 1988 were derailed by a stray glance at his watch. They are intimate gatherings, sometimes marked by testy exchanges or encroachments on a candidate’s physical space.

For Trump, the format is fraught with peril. Throughout the campaign, his most damaging foes have been ordinary people: the Muslim parents of a slain U.S. soldier, an Indiana judge with Mexican ancestry, a Latina pageant queen who battled weight gain. Trump has held very few retail campaign events over the past year. Now the billionaire developer will be facing down questions from voters before a televised audience in the tens of millions. If challenged by an angry voter, history suggests he won’t be able to resist lashing back—if not onstage, then by re-litigating the dispute for days after.

The campaign has tried to prepare him. New Jersey Gov. Chris Christie, a Republican ally known as a strong performer in town halls, is working closely with the candidate, and advisers have tightened his inner circle to limit distractions. But Trump has blanched at traditional practice techniques. The best his campaign could do was to arrange a town-hall style event Thursday night in Sandown, N.H.

It was a weak imitation of the actual challenges he will face Sunday. The invitation-only gathering featured pre-screened questions recited by a friendly moderator, Boston-area conservative radio host Howie Carr. “This isn’t practice. This has nothing to do with Sunday,” Trump insisted at the outset, dismissing such preparation as childish. During a truncated question-and-answer session, Trump dredged up old feuds, criticizing a Republican Senator, media personalities and the glitchy microphone on which he blamed his performance in the first debate.

Clinton is dealing with issues of her own. On Friday, Wikileaks published a cache of hacked emails purported to be the private correspondence of Clinton campaign chief John Podesta. (The Clinton confirm has not confirmed the authenticity of individual documents, though they released a statement acknowledging the emails were stolen.) Among the trove are alleged excerpts from some of Clinton’s paid speeches, which have never been publicly released and which became a source of controversy during the Democratic primary.

In the meantime, the former Secretary of State has followed the same regimented formula that catapulted her to a clear victory in their first contest. She is devouring briefing books. Advisers are drawing up ways for the Democrat to goad Trump into losing his cool. And there is little to suggest that he will be able to maintain it.

At Sunday’s Debate, What Clinton and Trump Need to Prove On the Economy

Clinton’s team also knows that Trump, with his back against the wall, will be a dangerous foe. Prodded by aides, Trump had forsworn raising Bill Clinton’s extramarital affairs during the debate. But in a terse statement, issued shortly after the Washington Post published a 2005 video of Trump, caught on a hot mic, making lewd remarks about kissing and groping women—while married to his wife, Melania—he invoked the former President’s own behavior in the second sentence.

“This was locker room banter, a private conversation that took place many years ago. Bill Clinton has said far worse to me on the golf course—not even close,” Trump said. “I apologize if anyone was offended.” He invoked Clinton again in an early Saturday morning video. Allies say that he will zero in on the former President’s dalliances on Sunday night.

With Trump’s campaign in meltdown mode, his best option is to try to blow up Clinton’s too. Which is why both sides—along with millions of viewers—should brace for fireworks on Sunday night.