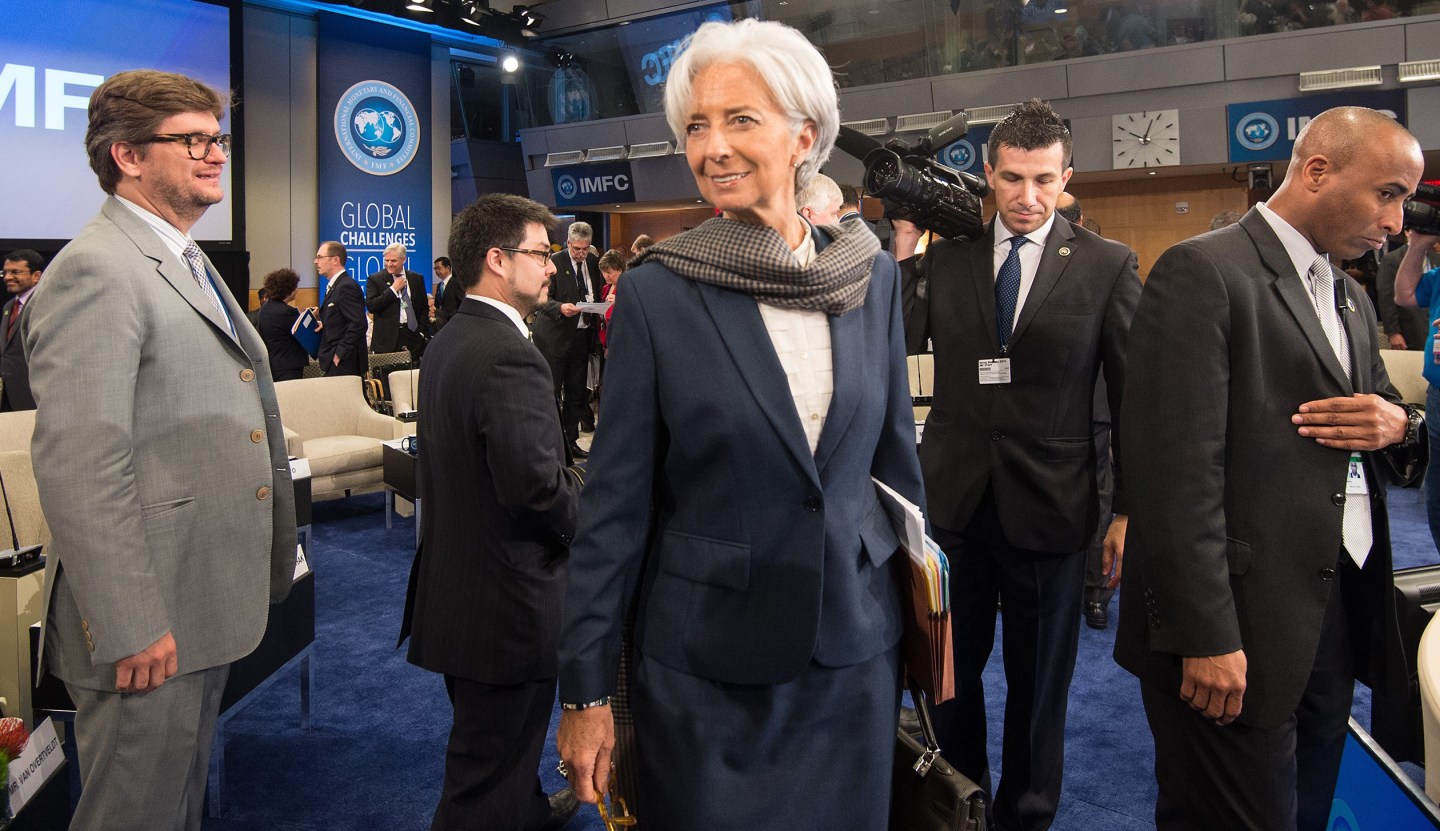 A senior European official tried to shore up confidence in the continent’s banking system, saying it was working well overall, while sources said Germany’s financial watchdog had found no evidence so far that Deutsche violated money laundering rules in Russia, possibly relieving one of its many headaches.

Meanwhile, the chief executives of several German blue-chip companies have discussed Deutsche’s problems and are ready to offer a capital injection if needed to shore up the bank, newspaper Handelsblatt reported on Thursday.

However, Lagarde did not mince her words about the problems of Deutsch, which the International Monetary Fund has identified as a bigger potential risk to the financial system than any other global bank, in an era of ultra-low interest rates.

“Deutsche Bank, like many other banks, has to look at its business model,” she told Bloomberg Television during the IMF and World Bank’s autumn meetings in Washington.

“It has to look at its long-term profitability—given the lower-bound interest rates we have around the world and probably for longer than many expect—and decide what size it wants to have and how it wants to strengthen its whole balance sheet.”

Germany’s flagship bank is under heavy pressure as it fights a penalty of up to $14 billion that the U.S. Department of Justice (DOJ) plans to impose for mis-selling mortgage securities, its latest setback that sent its shares to a record low last week and worried clients.

Deutsche Bank (DB) is in the midst of a deep overhaul that includes slashing a workforce of around 100,000, revamping information technology and selling non-core assets. It struck another deal on Thursday with its works council to cut a further 1,000 staff in Germany, bringing total job losses there to 4,000.

Lagarde acknowledged that Deutsche was selling assets but underlined the importance of reaching an out-of-court settlement with the DOJ.

“A bad settlement is always better than a good trial,” she said, adding that Deutsche was “not in a trial mode.”

“A settlement would … deliver some certainty as to what weight the bank will have to carry and whether it matches with its provisions or not. So the sooner, the better,” she said.

Deutsche has already spent €12 billion ($13.4 billion) on litigation since 2012, and says it has put aside €5.5 billion for its expected legal bill. This is far less than the top end of a possible DOJ fine, although other banks have negotiated their penalties down to much smaller sums and Deutsche hopes to do the same.

In preparation for a higher-than-expected legal bill, Deutsche has begun speaking with Wall Street firms about its options to raise capital. Senior advisers at the firms are offering to help underwrite a stock sale to raise about €5 billion, according to a Bloomberg report.

Nevertheless, uncertainty remains over the provisions amount. “We reckon that … may be insufficient to cover all ongoing litigation cases,” Scope Ratings said in note on Thursday.

Deutsche’s share price has staged a small recovery from the record low but remains down 43% from the beginning of the year.

A top shareholder, however, said the sell-off was overdone. “To us, Deutsche Bank is not a bank in crisis,” Frank Engels, head of fixed income at Union Investment, said.

European Commission Vice President Valdis Dombrovskis said that the bloc’s banking sector was working well despite problems at individual institutions in Germany or Italy. “Overall, the banking sector seems to be heading in the right direction,” he told reporters in Washington.

Deutsche Bank also got some positive signals from its home market on one of its other major litigation cases. The Bafin financial watchdog has found no evidence to date that it violated money laundering rules in Russia, people close to the matter said.

But regulators in Russia, Europe and the United States are also investigating it over “mirror trades.” These may have allowed clients to move money from one country to another in 2014 without alerting authorities, potentially enabling them to breach Western sanctions on Russia over the Ukraine conflict.

The British Financial Conduct Authority, the DOJ and the Department of Financial Services have launched investigations into whether any European or U.S. sanctions against Russian individuals were violated.

Ratings agency Moody’s said it does not expect Deutsche to accept an excessive penalty for the U.S. mortgages case that might prevent it from making interest payments on “AT1” debt that forms part of its capital reserves.

“We don’t think Deutsche would agree to a settlement that would jeopardize their ability to make their AT1 coupon payments in April 2017,” said Laurie Mayers, a banking analyst at Moody’s.

Investors have been focused on the potential damage from the U.S. mis-selling case in recent weeks, although German companies have rallied behind the lender, which plays a key role in financing their international operations and domestic needs.

In a source-based report, newspaper Handelsblatt said several German companies discussed an emergency plan under which they would purchase Deutsche Bank stock, in the low single-digit billions of euros, to boost its reserves. The paper added that Berlin welcomed the private-sector intervention.

Berlin is pursuing discreet talks with U.S. authorities to help Deutsche secure a swift settlement and put the bank back on a firmer footing, sources told Reuters.