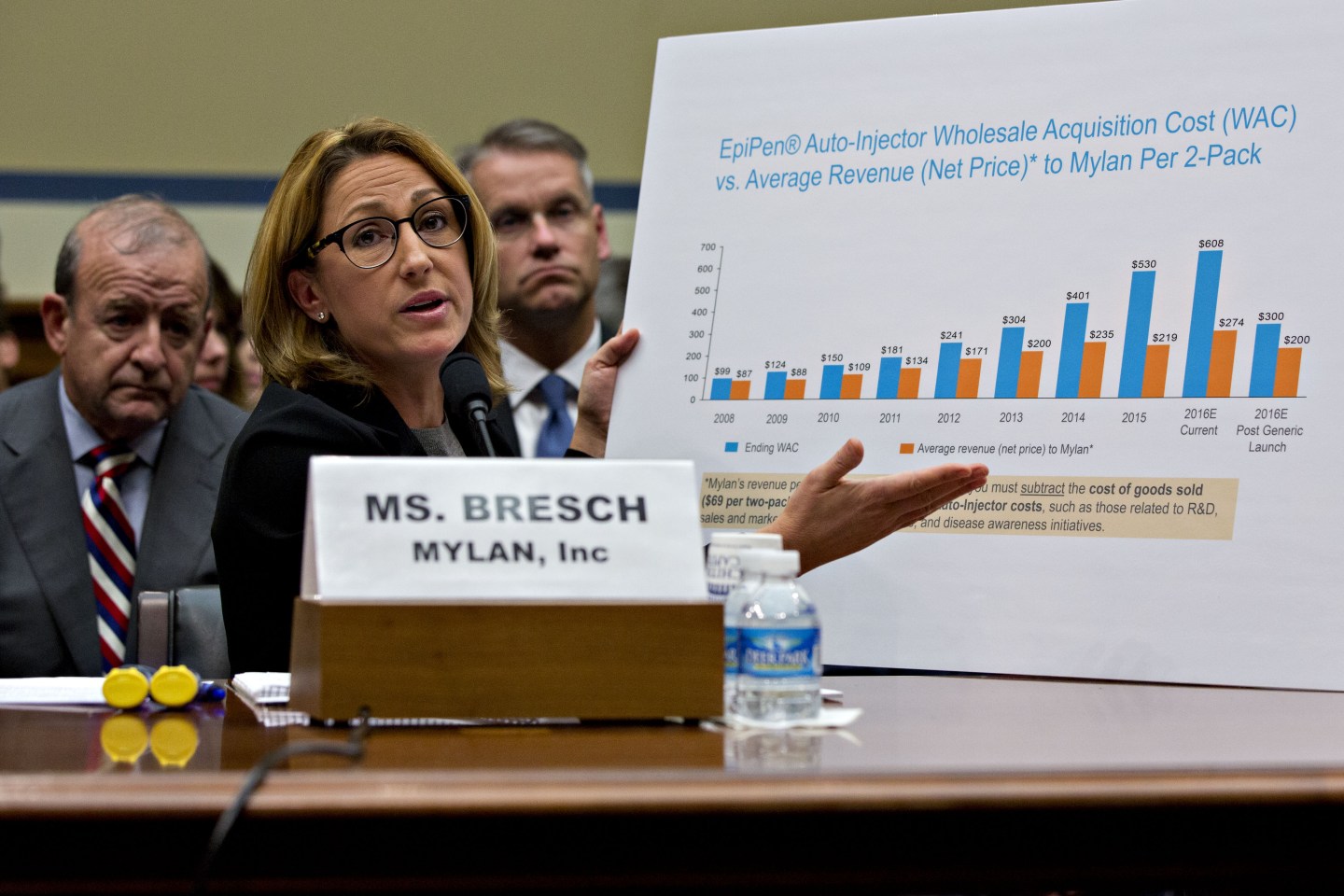 Heather Bresch, chief executive officer of Mylan NV, refers to a chart while speaking during a House Oversight and Government Reform Committee hearing in Washington, D.C., U.S., on Wednesday, Sept. 21, 2016. Lawmakers are questioning Bresch about how the company raised the price of the life-saving injection to $600 for a two-pack, from $57 a shot when it took over sales of the product in 2007. Photographer: Andrew Harrer/Bloomberg via Getty Images
Photograph by Andrew Harrer—Bloomberg via Getty Images

U.S. government health plans spent more than $1 billion on Mylan’s EpiPen emergency allergic reaction treatment between 2011 and 2015, according to figures released by the Centers for Medicare and Medicaid Services on Wednesday.

Mylan (MYL) is under scrutiny for raising prices on the lifesaving EpiPen sixfold in less than a decade, making the devices unaffordable for a growing number of families. U.S. lawmakers and prosecutors are also investigating what impact Mylan’s EpiPen pricing has had on government-funded health programs.

CMS, in response to a request from U.S. Senator Amy Klobuchar of Minnesota, said in a letter that the Medicaid plan for the poor spent $797 million on EpiPen in the five-year period, including rebates provided by Mylan, or $960 million before rebates. Costs for the Medicare Part D program for the elderly was nearly $335 million, a figure that does not reflect rebates.

CMS said it could not determine how much the government is owed for EpiPens, but reiterated its view that Mylan had misclassified the product.

“CMS has, on multiple occasions, provided guidance to the industry and Mylan on the proper classification of drugs and has expressly told Mylan that the product is incorrectly classified,” the agency said.

Mylan has said it complied with CMS rules. On Wednesday, it noted that the classification of EpiPen for Medicaid rebates had been made in 1997, a decade before it acquired the product.

New CMS rules that took effect this year allow companies to clarify any classification issues for a product like EpiPen, with companies asked to submit their requests by April 1, 2017.

“It would be premature to comment further on this issue until the CMS process has concluded,” Mylan said.

CMS, in another letter on Wednesday responding to Senator Ron Wyden of Oregon, wrote that “this incorrect classification has financial consequences for the amount that federal and state governments spend because it reduces the amount of quarterly rebates Mylan owes for EpiPen.”

The administrator again emphasized that “at this time, CMS cannot comment on the total amount of rebates owed by Mylan related to this incorrect classification.”

Klobuchar in a statement called for “clear answers on how deep this misclassification goes, how much it has cost taxpayers across the country, how many other drugs may be misclassified, and how we get that money back.” Mylan Chief Executive Heather Bresch was blasted by lawmakers during a congressional hearing last month for raising the list price for a pair of EpiPens to more than $600 this year. It cost about $100 in 2007, when Mylan acquired the product.

Mylan has said the list price does not reflect its true earnings on EpiPen once its discounts to payers, development costs and other expenses are taken into account.

It has sought to address the criticism by offering discounts more widely to consumers and plans to make available a generic version for about $300.