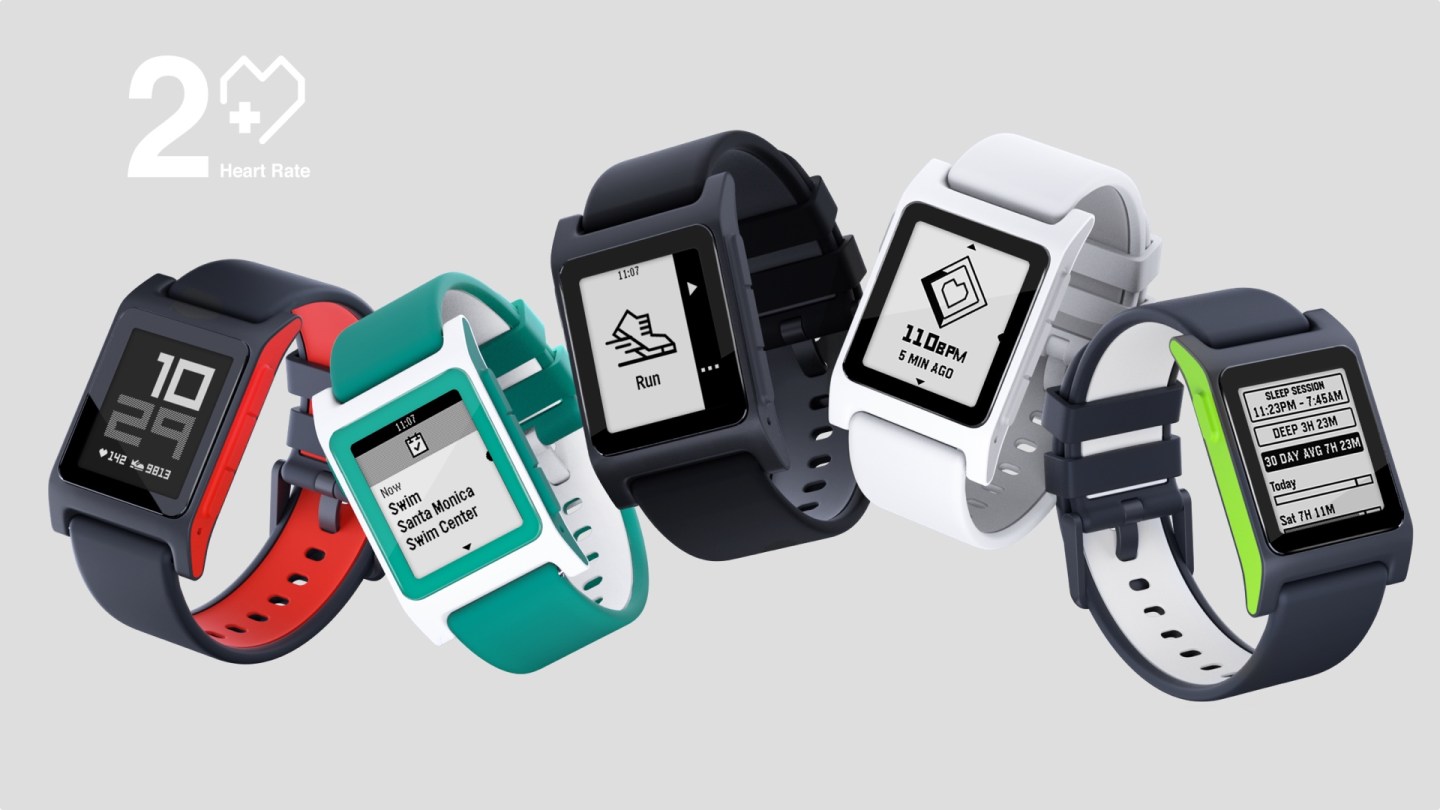 The good: Very affordable, long battery life, wide selection of fun watch faces
The bad: Not very attractive, Limited compared to other smartwatches and fitness bands, Interface takes some getting used to
Who should buy: Pebble fans, Budget buyers that are looking for a basic smartwatch and fitness tracker

More than four years ago, the original Pebble smartwatch became the most funded project on Kickstarter, with more than 68,000 backers pledging over $10 million total to bring it to market. The Pebble distinguished itself from other Internet-connected watches of that era in multiple ways. It was simple to use, it offered a wide variety of custom watch faces, and its energy efficient e-paper display meant it could last for days on a single charge. It was also cheaper than most similar devices at the time.

Much of the same can be said about the Pebble 2 + Heart Rate, a refresh of the classic Pebble launching later this month. (The wearable will be available through Walmart (WMT) and Amazon (AMZN) for $129.99 before going on sale at Pebble.com in November.)

Like the original Pebble, the Pebble 2 + Heart Rate had a blockbuster Kickstarter campaign, it includes a monochrome e-paper screen, and has a simple, sporty design. But this model has received significant upgrades, making it more capable and versatile than Pebble’s older watches. That’s crucial for the struggling Pebble, which laid off a quarter of its staff in March as much larger rivals like Apple (AAPL) and Samsung (SSNLF) release ever-improving alternatives.

Like Pebble’s other newer watches, the Pebble 2 + Heart Rate runs on the company’s updated interface, which includes a Timeline view for seeing upcoming events and weather forecasts. It also has a built-in workout app, a heart rate monitor (among other fitness-focused sensors), and programmable buttons that can be set to open certain apps with single press. It’s also water resistant, just like its predecessors.

All told, the new Pebble is a modernized version of the classic Pebble that first helped popularize smartwatches years ago. But it already feels dated compared to similar devices out there. Is it enough to compete with similar devices like those made by Fitbit (FIT) and Garmin (GRMN)? Here’s what I came away with after using the Pebble 2 + Heart Rate for the past week.

Much like the original, the Pebble 2 + Heart Rate looks and feels like a fitness watch, rather than a timepiece you’d want to wear during a fancy night out. The matte casing paired with the rubbery band that comes with the watch fit snugly and felt comfortable to wear all day. But for those who care about aesthetics, it may be worth spending a few extra bucks on a sleeker gadget.

Pebble’s user interface has long differed from that of other wearables. While many wrist-worn gadgets made by Samsung, Apple, and Fitbit include touch-sensitive screens, Pebble’s watches require you to press physical buttons located on the side of the device’s casing to navigate apps and menus. One side of the watch features three buttons: a middle key for launching the main menu (which includes apps, watch faces, and settings among other things), a top button that takes you to your fitness stats, and a bottom button for viewing upcoming events and the weather.

When navigating a menu, these top and bottom buttons can also be used to move the cursor up or down, while the middle key functions as a select button. A single button on the other side of the watch casing lets you navigate backwards.These buttons can also be customized to launch other watch apps or actions. If you use your watch primarily as a fitness tracker, for example, you might want to set it so that pressing the back button while on the home screen automatically starts a workout. And, unlike the original Pebble, the new model allows you to respond to messages on the wrist, either by sending a pre-programmed response or a voice reply.

This interface is mostly straightforward, but there may be a slight learning curve for Pebble newbies. Since most touch-sensitive watches don’t come with many buttons, I found myself accidentally tapping the wrong button when I wanted to navigate back or check the weather. One drawback: Finding apps to launch sometimes takes multiple presses, especially if they’re buried toward the bottom of the actions menu.

One of Pebble’s big advantages over other smartwatch makers remains its large collection of watch faces, ranging from basic backgrounds to more obscure designs. There’s probably a specific Pebble watch face for your favorite TV show, video game, or movie, if you take the time to search for it. After spending just a few minutes browsing through Pebble’s watch face selection, I found backgrounds tied to video games like Overwatch andSuper Mario Bros., as well as TV shows like Game of Thrones and The X-Files. Because of the e-paper display, watch faces on the Pebble aren’t as gorgeous as the Apple Watch’s fluttering butterflies or floating jellyfish. But in some ways they feel more authentic and personal.

Perhaps the Pebble 2 + Heart Rate’s best selling point is its long battery life. Because it uses an energy efficient e-paper screen instead of a high-resolution color display, it outlasts many other smartwatches on the market. After wearing Pebble’s new watch just shy of a week, it still had about 40% of its juice left. Battery life will vary depending on factors like which apps you use and how many notifications you get each day, but my experience jived with Pebble’s claims of week-long battery life.

The Pebble 2 + Heart Rate is just as much a fitness tracker as it is a smartwatch. Pebble, like many other companies making wrist-worn devices, is positioning its new product as a combination smartwatch and fitness tracker. The timepiece’s sensors let it track users’ calories burned, distance moved, steps taken and heart rate.

This format made it easy to parse the data my Pebble gathered about me throughout the day. But the app only shows change over time for the activity and sleep categories. That means if you want to look at how your average heart rate has fluctuated over the past month, for instance, you’ll have to manually cycle through each individual day’s worth of data.

The same goes for the health interface on the watch itself. While you can dig deeper into your step and sleep data to see how they have changed over the past several days, you can’t do so with your heart rate statistics. By comparison, Fitbit’s app shows how your resting heart rate has changed over the course of the past 30 days.

For more about the latest Fitbit, watch:

Pebble says that since most people experience variations in their heart rate throughout the course of a day, keeping track of those changes over a long period of time doesn’t accurately reflect an individual’s health. Still, a company spokesperson said the company is looking at adding other heart rate metrics in the future.

The Pebble 2 + Heart Rate is a solid fitness device for those who want a basic tracker that can give general insights around calories burned and step count. But devices like those made by Apple and Fitbit might be a better choice for health nuts, since both pack extra features, like the ability to track specific workouts (like swimming and cycling), as well as reminders to stand up when you’ve been sitting too long. (The Pebble 2 + Heart Rate only allows wearers to label activities as a walk, run, or workout, although a Pebble spokesperson said more functionality will be coming later.) While Pebble’s gadget may not be as versatile when it comes to health tracking as other fitness bands, it does push brief but encouraging activity recaps to your wrist after finishing after a workout, walk, or run.

The Pebble 2 + Heart Rate brings much-needed upgrades to the company’s classic smartwatch, like fitness tracking capabilities and a modernized user interface. For about $130, Pebble is offering a smartwatch that’s compatible with both iOS and Android (GOOG), can display a wide variety of notifications on your wrist, can measure your heart rate (among other fitness features), and is compatible with more than 15,000 watch faces and apps. Plus, it can last for a week on a single charge, far longer than many other wearables. From that perspective, the Pebble 2 + Heart Rate could be a compelling choice, given the price. (It’s about $140 cheaper than the original Apple Watch.)

That said, the Pebble 2 + Heart Rate falls short in some ways. It offers the core features that any modern smartwatch and fitness tracker should have, but it’s not the best at being either of those things. It lacks a color screen, it doesn’t offer mobile payments, and it doesn’t collect or display data as well as other health wearables. Meanwhile, Pebble’s choice to maintain an outdated design while other smartwatches have gotten slimmer, smarter and better looking feels like a step backwards.

While I love what the Pebble 2 + Heart Rate offers for the price, it’s not a watch I’m excited about having on my wrist everyday. The Pebble Time Round, with its circular stainless steel chassis and color touch screen, is a better choice for those seeking a watch that looks more elegant than sporty. It costs $70 more than the Pebble 2 + HR and doesn’t track your heart rate, but it can measure activity and sleep.

Pebble fans who loved the company’s classic smartwatch will likely be happy with the Pebble 2 + Heart Rate and its new features. But those seeking a more fully-featured fitness gadget around the same price as the new Pebble should check out devices like Fitbit’s Alta or Charge 2, or Garmin’s Vivosmart HR+.