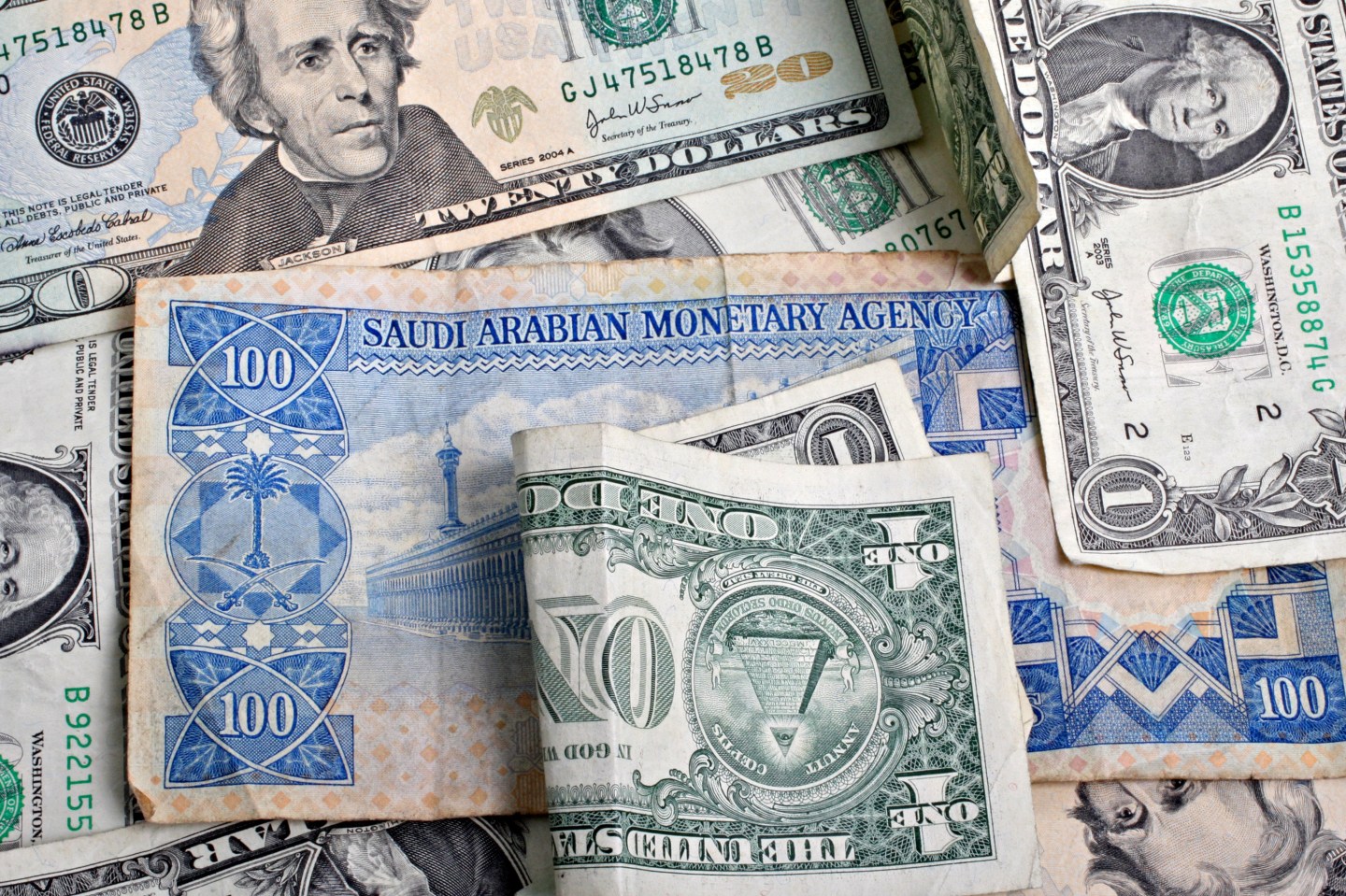 UNITED STATES - NOVEMBER 19: A Saudi Arabian one hundred riyal note and an assortment of U.S. dollar bills are arranged for a photograph in New York, U.S., on Monday, Nov. 19, 2007. When central bankers in the Middle East say they have no plans to end their fixed exchange rates to the dollar, the currency market hears the opposite. (Photo by Stephen Hilger/Bloomberg via Getty Images)
Stephen Hilger/Bloomberg via Getty Images/File

Saudi Arabia’s central bank said on Sunday it had given commercial banks instructions to reschedule consumer loans of customers hit by recent cuts in government spending due to low oil prices.

The announcement underlined growing pressure on the Saudi economy and banking system as the government, its oil export revenues down sharply, struggles to curb a budget deficit which totalled a record 367 billion riyals ($98 billion) last year.

Last week the cabinet said it would cut ministers’ salaries by 20% and reduce financial allowances for public sector workers. About two thirds of working Saudis are in the public sector and many obtain as much as 30% of their income from such allowances.

In addition to dampening consumer spending, the cuts look likely to make it harder for some consumers to service their loans, which totalled some 343 billion riyals at the end of June.

The central bank said it wanted to alleviate the difficulties of borrowers whose incomes had been reduced, and its instructions suggested commercial banks would be required to assume substantial costs in the rescheduling process.

Banks must obtain customers’ approval to reschedule loans and they cannot add extra fees or change the interest rate, the central bank said.

In some cases, banks will be allowed to reschedule loans without sticking to the usual maximum loan maturity of five years, but they cannot deduct more than a third of customers’ monthly net income to make loan payments. Local media had said banks were lobbying for permission to deduct up to 40%.

The central bank will assess what decisions should be taken regarding other financing products affected by austerity policies, it said.

One local economist estimated the government would save about 50 billion riyals annually with the pay cuts announced last week, but it is not clear whether that sum, and drastic reductions to spending on state projects introduced early this year, would reduce the budget deficit sufficiently.

Some economists believe that to retain the confidence of financial markets, the government is aiming to shrink the deficit to near 10% of gross domestic product this year from 15% in 2015.

That could require further austerity measures, perhaps new fees or taxes on the kingdom’s large workforce of foreigners. The Saudi stock market plunged 3.1% on Sunday to its lowest close since March 2011 partly because of fears that such steps could be imminent.