The Rise of Renho Murata Could Advance Other Women in Japan 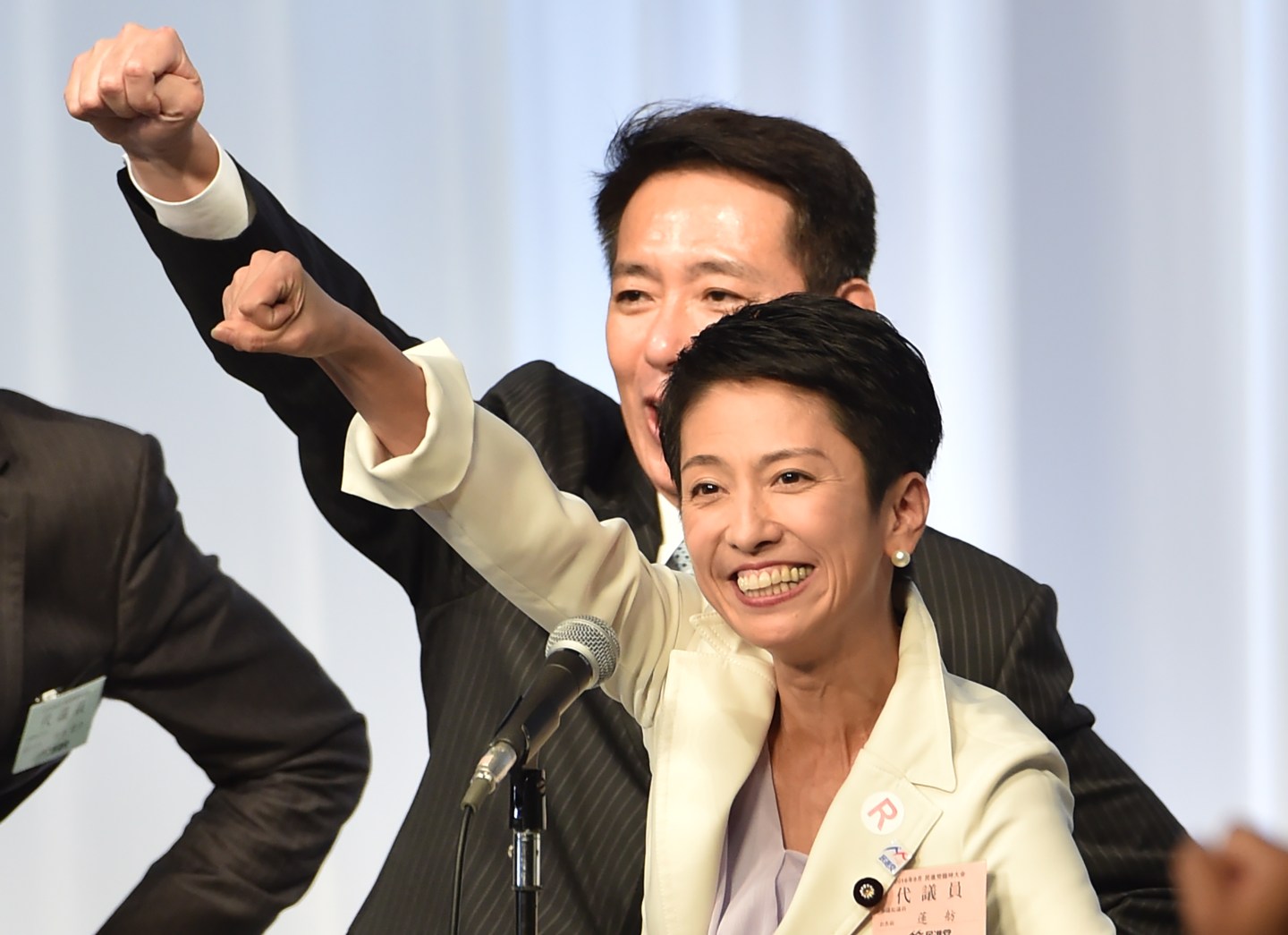 TOPSHOT - Renho, chosen for the new leader of the Democratic Party, raises her arm with party members at the end of their leadership election in Tokyo on September 15, 2016. Japan's main opposition party on September 15 chose a fiery former newscaster with Taiwanese roots as its new leader in its latest bid to reboot after losing power nearly four years ago. / AFP / KAZUHIRO NOGI (Photo credit should read KAZUHIRO NOGI/AFP/Getty Images)
Kazuhiro Nogi—AFP/Getty Images

Renho Murata was recently elected as head of Japan’s Democratic Party (DP), the country’s main political opposition faction. This is the first time a woman has headed the DP, and as a result, her installment as leader is symbolically important for the women of Japan.

The status of Japanese women in the realm of political and economic empowerment is abysmally low. In the 2015 Global Gender Gap Index, Japan ranked 101 out of 145 countries surveyed. The labor force participation rate for women is 64% compared to 85% for men. The gender pay gap, at 26.6%, is the second largest after South Korea’s among Organisation for Economic Co-operation and Development (OECD) countries and compares poorly to the OECD average of 16%. Only 5% of board directors in Fortune Global 500 companies in Japan are women. The statistics go on.

This gender inequality in the workforce extends to the world of politics, which continues to be dominated by middle-aged and elderly men. The pace of progress for women in this field is glacial. In 1946, when women first ran for political office, 8% of the House of Representatives’ Lower House seats were won by women. In 2016, that figure is a mere 9%. In this context, Renho’s rise to the powerful position of DP leader is something to sit up and take notice of. In fact, Renho is the third woman in Japan to reach a politically powerful position this year. The other two are Tomomi Inada, the defense minister, and Yuriko Koike, the governor of Tokyo.

Time will tell whether more women in Japan will become influential leaders. But Renho’s election may have a direct impact on the status of Japanese women more generally. Her success will depend on two factors: whether Renho and her colleagues create and implement policies that benefit women, and whether the DP can have a stronger impact on policy-making or even take control of the government. The first cannot really come to fruition without the second happening, as the ruling Liberal Democratic Party (LDP) has control of both houses of Parliament, both of which nominally must approve a bill before it passes and becomes law.

Regarding the first point, Renho has indicated that she wishes to implement policies that will enable more women to participate freely in the workforce and to be better rewarded for their work. She supports some elements of Abenomics—the fiscal policy package being rolled out since 2012 under the Shinzo Abe administration—but she also believes that it has arrived at an impasse and that some changes are needed, especially the policies regarding families and working women. Specifically, she calls for more investment in education, childcare, and other forms of support that will enable families to raise children more easily.

At a time when Japan faces a rapidly aging population and a very low birth rate, Renho is keen to create policies that enable couples to feel confident having children without the fear of being excessively financially penalized. She has also proposed revising income tax laws that penalize dual-income families, since the laws have been criticized for encouraging some women to limit their participation in the paid workforce.

Most women join the workforce after their studies, but 70% drop out after having their first child. When (or if) they return—usually years later—they often come back as contract, part-time, or casual workers. Underpinning this situation is a combination of cultural norms surrounding the importance of devoted motherhood and structural constraints that make it very difficult for a full-time working woman to combine family and work responsibilities. A long-work-hours culture and inadequate childcare facilities prevent many mothers in urban centers from participating fully in the workforce.

But in order to enact these policies, the DP will need to wrest control of the government. Renho faces an uphill battle. The governing LDP has had control of the government either on its own or in coalition with other parties since its formation in 1955, with only two brief hiatuses. It is one of the most powerful and longest-serving political parties in the world. The second LDP break was between 2009 and 2012, which was the only time the Democratic Party of Japan (the DP’s predecessor) has been in government. At the time, the party was unable to gain enough support from the public to keep its momentum. The LDP is commonly seen as reliable while the DP is seen as inexperienced and therefore unqualified for governing. If Renho is able to turn this perception around, it will be an extraordinary achievement for both Japan and, eventually, its women.

Emma Dalton is a lecturer in Japanese at La Trobe University in Melbourne.