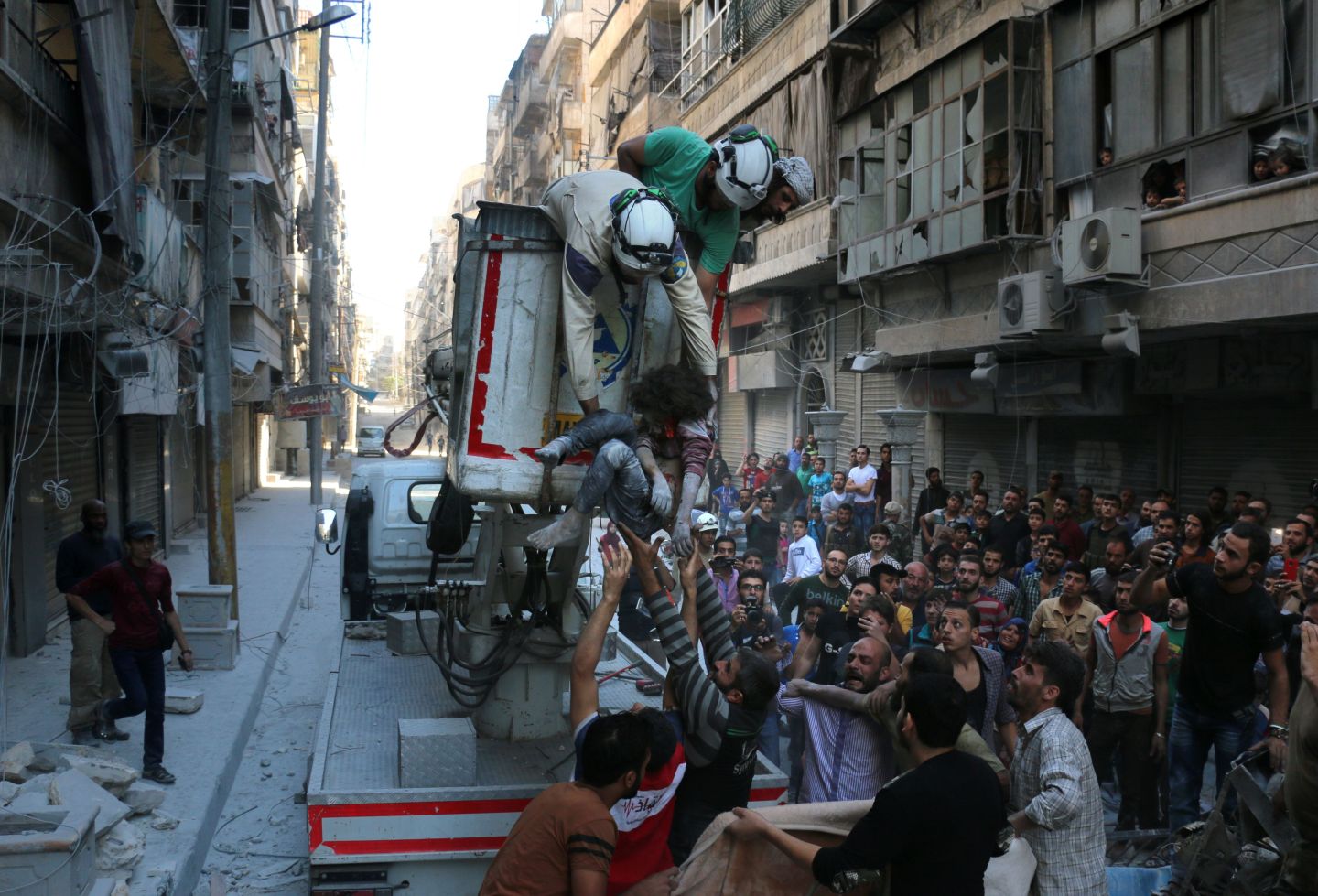 Syrian civil defence volunteers, known as the White Helmets, hand the body of a girl down to civilians on the ground as her father (striped purple shirt) mourns after she was pulled from the rubble following a government forces air strike on the rebel-held al-Shaer neighbourhood of the northern Syrian city of Aleppo on September 27, 2016. / AFP / AMEER ALHALBI (Photo credit should read AMEER ALHALBI/AFP/Getty Images)
AMEER ALHALBI AFP/Getty Images

Russia warned the United States Saturday against carrying out any attacks on Syrian government forces, saying it would have repercussions across the Middle East as government forces captured a hill on the edge of the northern city of Aleppo under the cover of airstrikes.

Russian news agencies quoted Foreign Ministry spokeswoman Maria Zakharova as saying that a U.S. intervention against the Syrian army “will lead to terrible, tectonic consequences not only on the territory of this country but also in the region on the whole.”

She said regime change in Syria would create a vacuum that would be “quickly filled” by “terrorists of all stripes.”

U.S.-Russian tensions over Syria have escalated since the breakdown of a cease-fire last month, with each side blaming the other for its failure. Syrian government forces backed by Russian warplanes have launched a major onslaught on rebel-held parts of the northern city of Aleppo.

Syrian troops pushed ahead in their offensive in Aleppo on Saturday capturing the strategic Um al-Shuqeef hill near the Palestinian refugee camp of Handarat that government forces captured from rebels earlier this week, according to state TV. The hill is on the northern edge of the Aleppo, Syria’s largest city and former commercial center.

What Life is Like for the Children of War-Torn Aleppo

Airstrikes on Aleppo struck a hospital in the eastern rebel-held neighborhood of Sakhour putting it out of service, according to the Britain-based Syrian Observatory for Human Rights and the Local Coordination Committees. They said one person was killed in the airstrike.

Opposition activist Ahmad Alkhatib described the hospital, known as M10, as one of the largest in Aleppo. He posted photographs on his Twitter account showing the damage including beds covered with dust, a hole in its roof and debris covering the street outside.

A doctor at the hospital told the Aleppo Media Center, an activist collective, that thousands of people were treated in the compound in the past adding that two people were killed in Saturday’s airstrikes and several were wounded.

“A real catastrophe will hit medical institutions in Aleppo if the direct shelling continues to target hospitals and clinics,” said the doctor whose name was not given. He said the whole hospital is out of service.

This Is the Most Googled Word in Syria

Opposition activists have blamed the President Bashar Assad’s forces and Russia for airstrikes that hit Civil Defense units and clinics in the city where eastern rebel-held neighborhoods are besieged by government forces and pro-government militiamen.

On Friday, the international medical humanitarian organization Doctors Without Borders demanded that the Syrian government and its allies “halt the indiscriminate bombing that has killed and wounded hundreds of civilians—many of them children,” over the past week in Aleppo.

“Bombs are raining from Syria-led coalition planes and the whole of east Aleppo has become a giant kill box,” said Xisco Villalonga, director of operations for the group. “The Syrian government must stop the indiscriminate bombing, and Russia as an indispensable political and military ally of Syria has the responsibility to exert the pressure to stop this.”

It said from Sept. 21 to 26, hospitals still functioning in Aleppo reported receiving more than 822 wounded, including at least 221 children, and more than 278 dead bodies—including 96 children—according to the Directorate of Health in east Aleppo.

For more on Syria, watch:

In the eastern province of Deir el-Zour, warplanes of the U.S.-led coalition destroyed several bridges on the Euphrates river, according to Syrian state news agency SANA and Deir el-Zour 24, an activist media collective. The province is a stronghold of the Islamic State group.

SANA said that among the bridges destroyed was the Tarif Bridge that links the eastern city of Deir el-Zour with the northern Syrian city of Raqqa, the extremists’ de-facto capital.