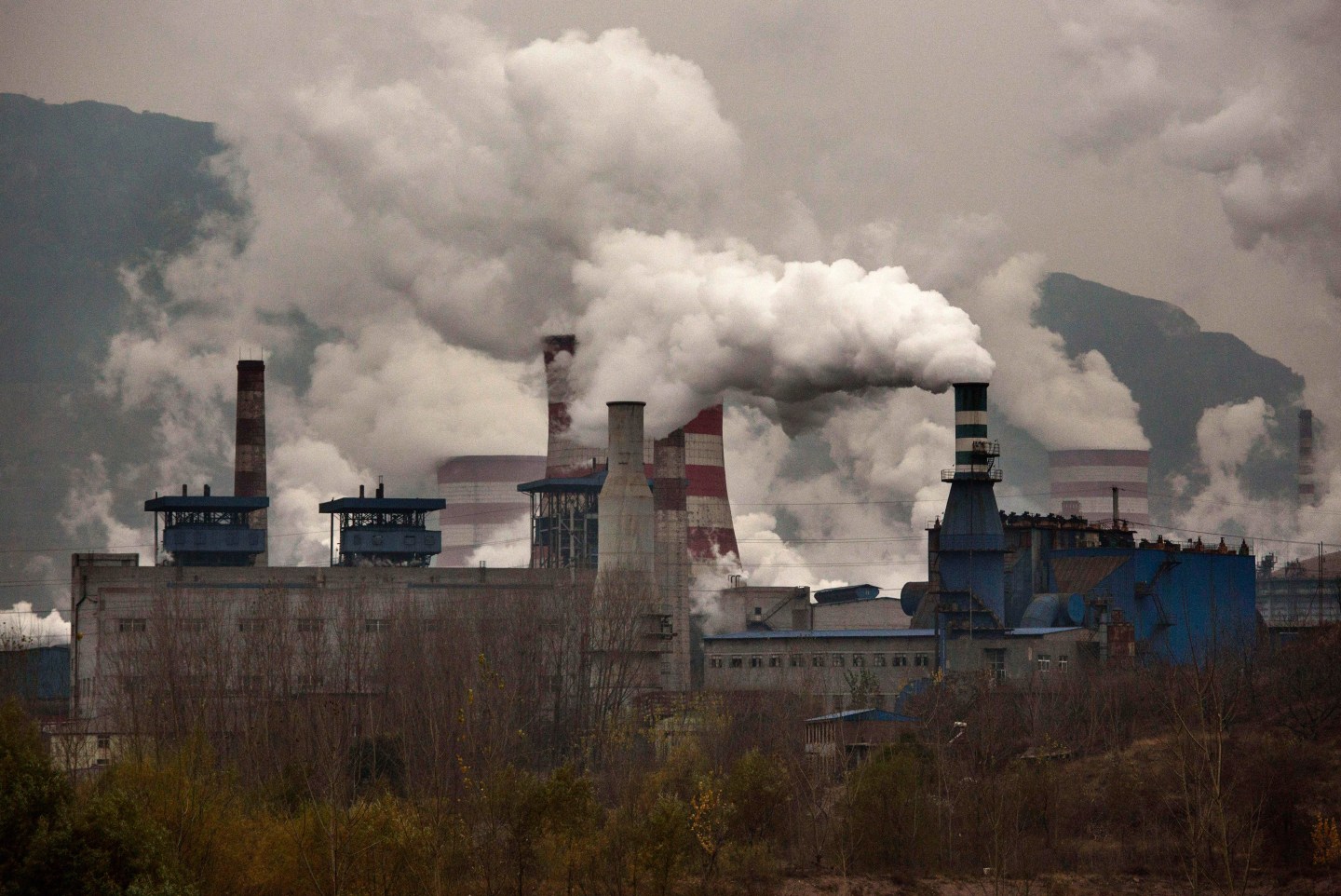 HEBEI, CHINA - NOVEMBER 19: Smoke billows from smokestacks at a steel factory on November 19, 2015 in the industrial province of Hebei, China. China's government has set 2030 as a deadline for the country to reach its peak for emissions of carbon dioxide, what scientists and environmentalists cite as the primary cause of climate change. At an upcoming conference in Paris, the governments of 196 countries will meet to set targets on reducing carbon emissions in an attempt to forge a new global agreement on climate change. (Photo by Kevin Frayer/Getty Images)
Kevin Frayer Getty Images

China’s factory sector struggled to gain speed in September while Japanese inflation went backwards in August despite the best efforts of policymakers, underscoring the limits of stimulus in reviving world growth.

Friday’s unflattering figures bookmarked a week in which the IMF warned it would likely downgrade forecasts for the U.S. economy, and the World Trade Organization slashed its outlook for global trade flows.

That was unwelcome news for markets spooked by troubles at Deutsche Bank, whose U.S. shares took a hammering on reports some hedge funds had reduced financial exposure to Germany’s largest lender.

The bank said the “vast majority” of its clients remained supportive, but the situation still drew comparisons to the 2008 failure of Lehman and the resulting global financial crisis.

There was at least some evidence that China, the world’s second largest economy, had stabilized, if only because of a burst of government spending and a red-hot housing market.

See also: The WTO Has Slashed Its Forecast for Global Trade Growth

The Caixin measure of manufacturing activity (PMI) edged up a tenth of a percentage point to 50.1, led by output and new orders. While the move was marginal, it was only the second time the index had reached positive territory since February 2015.

The U.S. economy also looked to have bounced back in the third quarter, while a string of data showed Europe weathered Britain’s Brexit vote better than many had feared.

All of which encouraged Barclays to nudge up its 2017 call for global growth to 3.5%, from an expected 3.1% this year. Yet a true lift-off still seems remote.

“Given the modest acceleration in growth that we forecast and the many downside risks around these forecasts, it seems overly optimistic to suggest that the global economy has reached “escape velocity,”” said Barclays economist David Fernandez.

“Although these trends do not seem to be worsening, there are few signs – despite tremendous policy efforts – of any meaningful turnaround,” said Fernandez.

The limits of policy stimulus were all to evident in Japan where core consumer prices fell 0.5% in August from a year earlier, the largest drop since March 2013.

The data seemed to mock the Bank of Japan’s recent pledge not only to boost inflation to 2% but to lift it above that, so far unreachable, target for a sustained period.

Nor were Japanese consumers cooperating. Household spending sank 4.6% in the year to August, almost twice the fall expected by analysts.

Indeed, Friday’s data across Asia were littered with unwanted milestones.

In tech bellwether South Korea, factory output suffered the steepest decline in 19 months in August as strikes stalled auto production. Things were no better in September with the Nikkei/Markit measure of manufacturing falling to a 14-month trough at 47.6 as new export orders hit their lowest since mid-2013.

Malaysia’s version of the PMI contracted for the 18th straight month in September as new export orders dropped at the fastest pace in three months.

Inflation, or the lack of it, will also feature heavily in European and U.S. data due later on Friday.

The flash measure of consumer price inflation in the euro zone is forecast to rise an annual 0.4% in September. That would be up from 0.2% in August but still a world away from the European Central Bank’s target of just under 2%.

The Federal Reserve’s preferred measure of U.S. inflation, the core personal consumption expenditures index, is seen stuck at 1.6% for the year to September, exactly where it has been since March.