El Cajon Shooting: How Police Deal With African Americans and the Mentally Ill 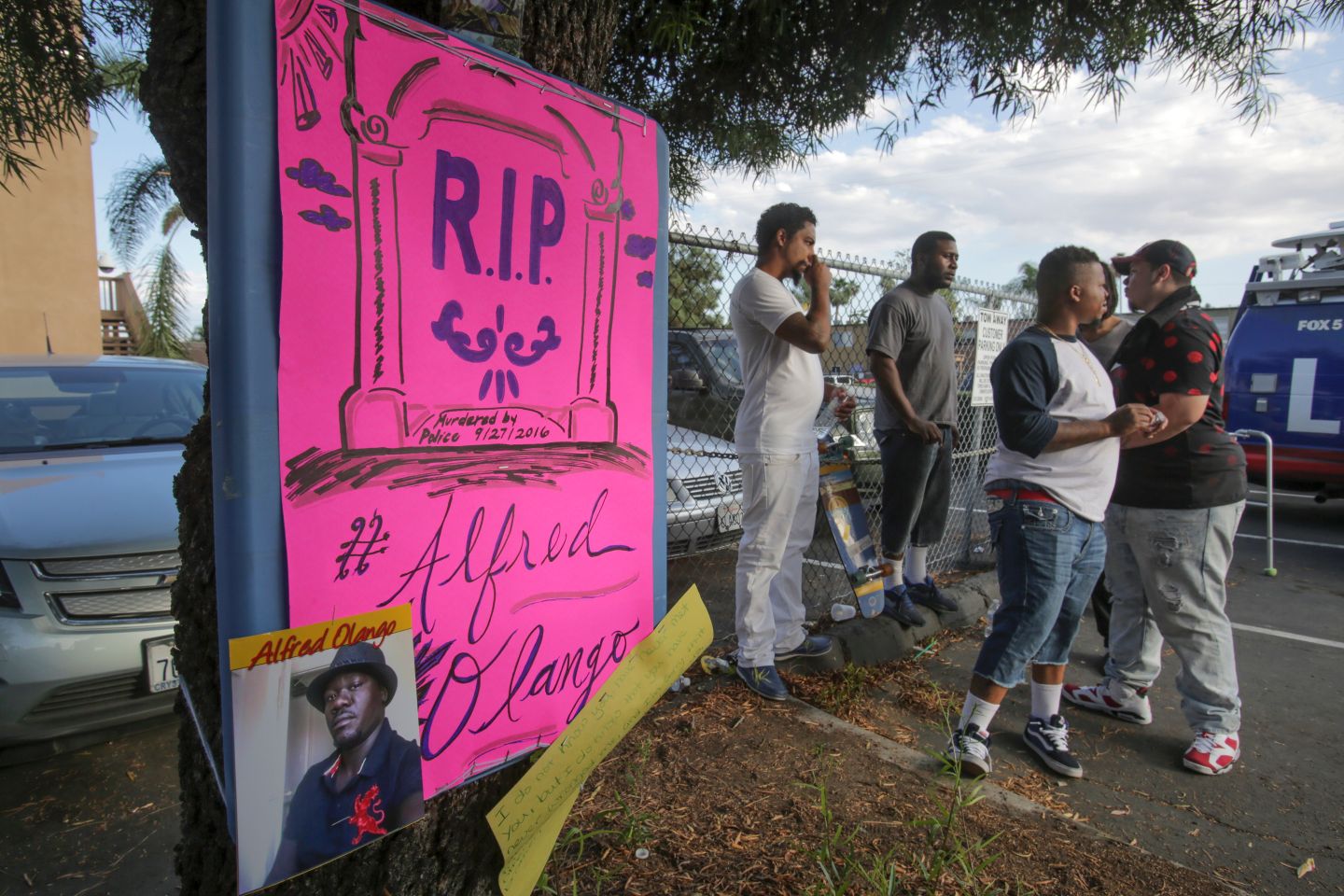 Demonstrators stand near a poster during a rally in El Cajon, a suburb of San Diego, California on September 28, 2016, in protest of the police shooting the night before. Protesters marched in a California town following the fatal police shooting of an unarmed black man said to be mentally ill, as local officials urged calm and pledged a full investigation. The victim, identified as Ugandan refugee Alfred Olango, 30, was shot on Tuesday in the San Diego suburb of El Cajon after police received an emergency call about a man behaving erratically and walking in traffic. / AFP / Bill Wechter (Photo credit should read BILL WECHTER/AFP/Getty Images)
Photography by BILL WECHTER AFP/Getty Images

He was holding a vape device, not a gun.

Alfred Okwera Olango was shot and killed by police in El Cajon, California two days ago, after a woman who identified herself as his sister called authorities asking for help. He was sick, she said, confused and wandering in traffic. She needed help with and for him. Instead, the police shot him dead. A Facebook live stream of the aftermath is wrenching. The mayor of El Cajon says he has seen cell phone footage of the shooting and that if it was his son, he would be “devastated.” Protests demanding an investigation into the shooting have entered their second day.

Turns out, he was a Ugandan refugee.

These kinds of incidents are happening to an alarming degree, and I won’t tick through a recent list here. But here’s one stat that helps frame the issue: A person with an untreated mental illness is 16 times more likely to be killed by police than other people when stopped by law enforcement, according to a 2015 report by the Treatment Advocacy Center.

Police are increasingly under-resourced, unprepared and under pressure to keep the peace in ways that don’t lend themselves to talking someone down. A seizure looks like resisting arrest. Autism looks like belligerence. And a person having a mental breakdown looks like an imminent threat. But for anyone who is keeping track, the willingness of police to de-escalate and capture white suspects but not black ones feels like a clear sign of bias.

For families of color, the situation is particularly fraught. People don’t realize that there is a large autistic population of color, for example, many of whom are statistically less likely to have access to the kinds of support and services that they need to succeed. And encounters with police tend to end badly, like the autistic teen who was beaten in New York for being “no good,” or the Miami therapist who was shot while trying to explain that his autistic charge was not dangerous.

A recent episode from WNYC’s always excellent Death, Sex and Money podcast offers real hope, and I can’t recommend it highly enough. Guest host Diane Gill Morris is also a black mom with two black, autistic sons, who worries how they will be perceived by law enforcement now that they’re teens. “My fear is always that an officer sees a black man and they will immediately go to the idea of this being a person on drugs versus this being a person with disability.”

She talks with police officer Robert Zink, who founded the St. Paul CARE (Cops Autism Response Education) Project and has had real success training other officers to make sure they understand what they are seeing when they arrive on scene. “Officers may not read the cues of what the person is presenting,” he says. “Officers may view them as cues of, is it drug interaction? Is it a mental health issue? And read those cues wrong….And we go down one path and it gets worse and worse.” Zink is white and has two autistic kids of his own.

But even if this issue is not top of mind for you, the episode is also a master class in how to have a difficult conversation about race. Morris and Zink, two people who appear to be on opposite sides of a great divide, listen attentively to each other while building on their common experience.

You can listen to it here.