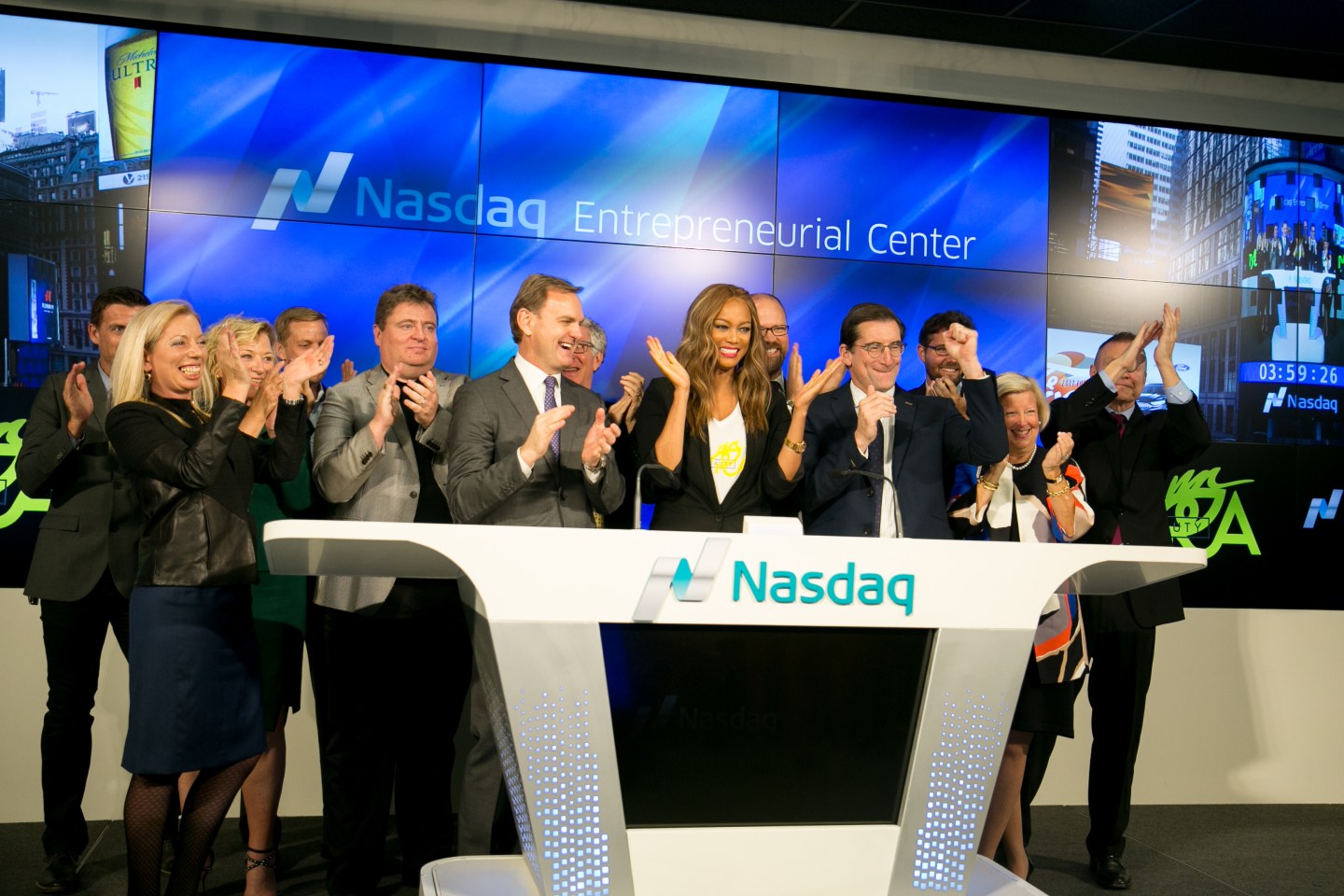 Tyra Banks began her career as a supermodel more than 25 years ago, but she’s since produced a talk show, the long-running America’s Next Top Model series, along with a host of other business ventures.

Most recently, Banks has been focused on Tyra Beauty, a cosmetics company that is similar to Avon and Mary Kay, in that it enlists independent sellers who earn commissions when they sell the products to friends and other customers. On Tuesday, Banks stopped by NASDAQ’s Entrepreneurial Center in San Francisco to ring the markets’ closing bell.

The occasion? Her cosmetics company’s one-year anniversary. Fortune spoke with Banks about her cosmetics company, other ventures like her now-defunct Smize mobile app for taking selfies, and the upcoming two-week course she’ll teach at Stanford Business School.

The interview has been edited for length and clarity.

What was the idea behind Tyra Beauty?

I wanted to level the playing field and to have women be able to accomplish transformation, but really fast and really fun, and take the intimidation out of makeup.

I was talking to a mentor— a very successful man—and he said, “Okay, what are you doing on your for-profit side?” and I told him. And he said, “You’re gonna put makeup on a shelf, in a store?” He goes: “That is blasphemy, that is disgusting, that is a sin. All these years you’ve been saying, ‘Be your own boss! Girl power! You can do it! Be the CEO of your life!’ And it’s just words because you’re gonna put makeup on a shelf.”

He introduced to me social selling (the use of independent sellers) and said: “This is what you stand for and you can actually give them the platform to take and have financial freedom.” Whether its financial freedom and quitting their jobs and working from home or just doing a little side hustle and having a little extra spending money.

You’ve been involved in tech— you had your app, Smize (released in 2012), and invested in others.

That app was a hot mess! A hot mess.

What did you learn from that?

I learned to wait for the technology to catch up. I can only imagine now if I had that Smize app with all the technology that is pretty much just out there (today). The Snapchat filters and all of this facial reconstructive stuff— it would have been amazing. My Smize app made people look like an alien.

I have now learned, if it ain’t ready, wait. If it’s not amazing, kill it. So that was a $40,000 investment, thank God, because now I have Tyra Beauty, which is millions upon millions of self-funded company. I’ve really learned to hold things and to take a loss because you want to make sure that things are right. So thank you, Smize app.

So you’re teaching a course in May at Stanford Business School about personal branding. What’s the biggest mistake that a business person can make when it comes to their personal brand?

One of the biggest mistakes is speaking to people like you, and not knowing what the hell to say and not having some type of training or some type of filter so that one or two sentences don’t ruin their entire career and their entire life. And I’ve seen it happen again and again and again. We are in a culture that is all about “Gotcha! You’re ruined!” So it’s crucial for them to think before they speak.

What did you learn from the business side of producing “America’s Next Top Model” that you can apply today?

Delegation. So in the beginning of Top Model, I had a partner, Ken Mok. Love him to death, we’re each other’s godparents of our children.

I had hired amazing people who can do their jobs, so I’ve now learned to get out of their way. With Top Model now, I’m delegating even more as the show changes. If you have a personal financial stake in something that you want to continue, put your ego aside. So I put my ego aside and said I want this to continue. Top Model funded Tyra Beauty. And Tyra Beauty is still a self-funded company. So the longer Top Model lasts, the more money I have for Tyra Beauty. That wouldn’t have continued if I continued to be the host and the style was the same. So I’ve learned about adapting, and changing, and shifting, and pivoting. And delegation!