People Want to Know What ‘Braggadocious’ Means Thanks to Donald Trump 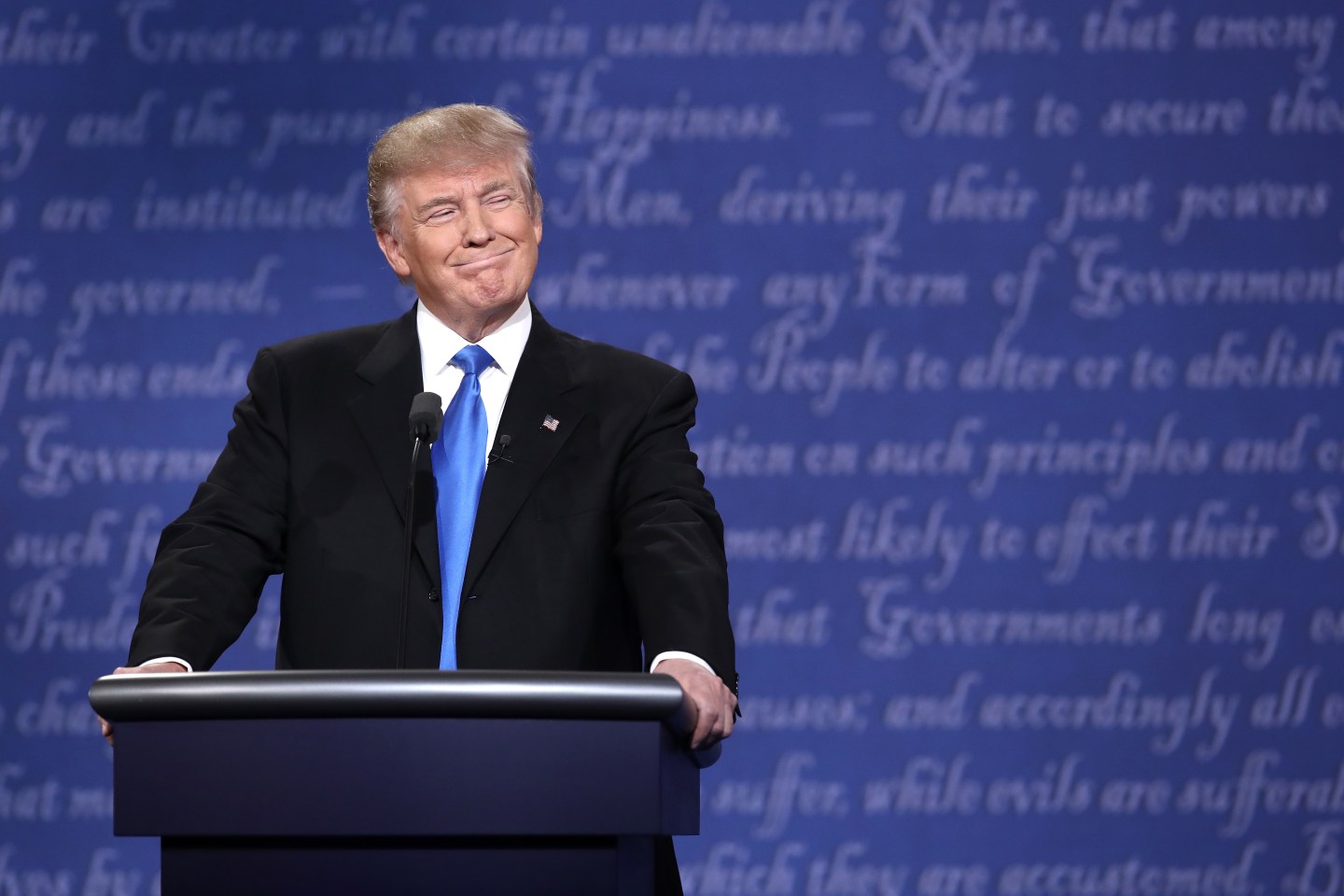 Some of the words used by Hillary Clinton and Donald Trump in Monday’s presidential debate left voters wondering.

Dictionary.com provided Fortune with a list of the most-searched definitions during the first general election showdown, including desktop and mobile searches.

Here are some of the words that were trending after the debate:

Debate Usage: Trump used the word while responding to Clinton’s accusation that he has refused to release his tax returns because he’s not as rich or as charitable as he claims to be, or because he doesn’t want Americans to know he hasn’t paid federal income taxes. Trump, in turn, argued that “you don’t learn that much from tax returns” and touted his wealth.

“I have a great company,” he said. “I have a tremendous income. And the reason I say that is not in a braggadocious way. It’s because it’s about time that this country had somebody running it that has an idea about money.”

Dictionary.com saw a 12,545% increase in searches for the word. “Braggadocio” was also popular, increasing 1,106%.

Debate Usage: Dictionary.com saw a 2,330% spike in searches for “bigly,” even though it was technically never mentioned during the debate. Trump is partial toward the expression “big league,” which often sounds like “bigly.” The phrase has sparked questions throughout the presidential campaign, and there’s still some debate over what Trump said on Monday. But multiple transcriptions, including that of CQ TranscriptsWire and the Washington Post, characterized it as “big league.”

Definition: (noun) This isn’t a word by dictionary standards, but it refers to the long-debunked conspiracy theory that President Barack Obama was not born in the U.S.

Debate Usage: The term factored prominently into the debate, as Trump—who was long one of the most vocal proponents of the theory—was asked why it took him so long to admit that Obama was born in the U.S., which he finally did this month. After repeating the false claim that Clinton’s 2008 campaign started the “birther” argument, Trump said he did “a good job” in getting Obama to release his long-form birth certificate.

“I was the one that got him to produce the birth certificate. And I think I did a good job,” Trump said.

Clinton attacked Trump on the issue, calling it a “racist birther lie.”

“He has a long record of engaging in racist behavior, and the birther lie was a very hurtful one,” Clinton said. “You know, Barack Obama is a man of great dignity. And I could tell how much it bothered him and annoyed him that this was being touted and used against him.”

Dictionary.com saw a 1,034% increase in searches for “birtherism.”

Definition: (noun) the combination of mental, physical, and emotional traits of a person; natural predisposition

Debate Usage: Trump used the word five times in an argument against Clinton, positing that he has a “much better temperament than she has.” Searches for the word on Dictionary.com increased 2,174%.

It was Trump’s attempt to flip one of Clinton’s common criticisms against him, as she has repeatedly characterized him as “temperamentally unfit to be President.” She made the same argument on Monday, gleefully shimmying her shoulders when it was her turn to respond.