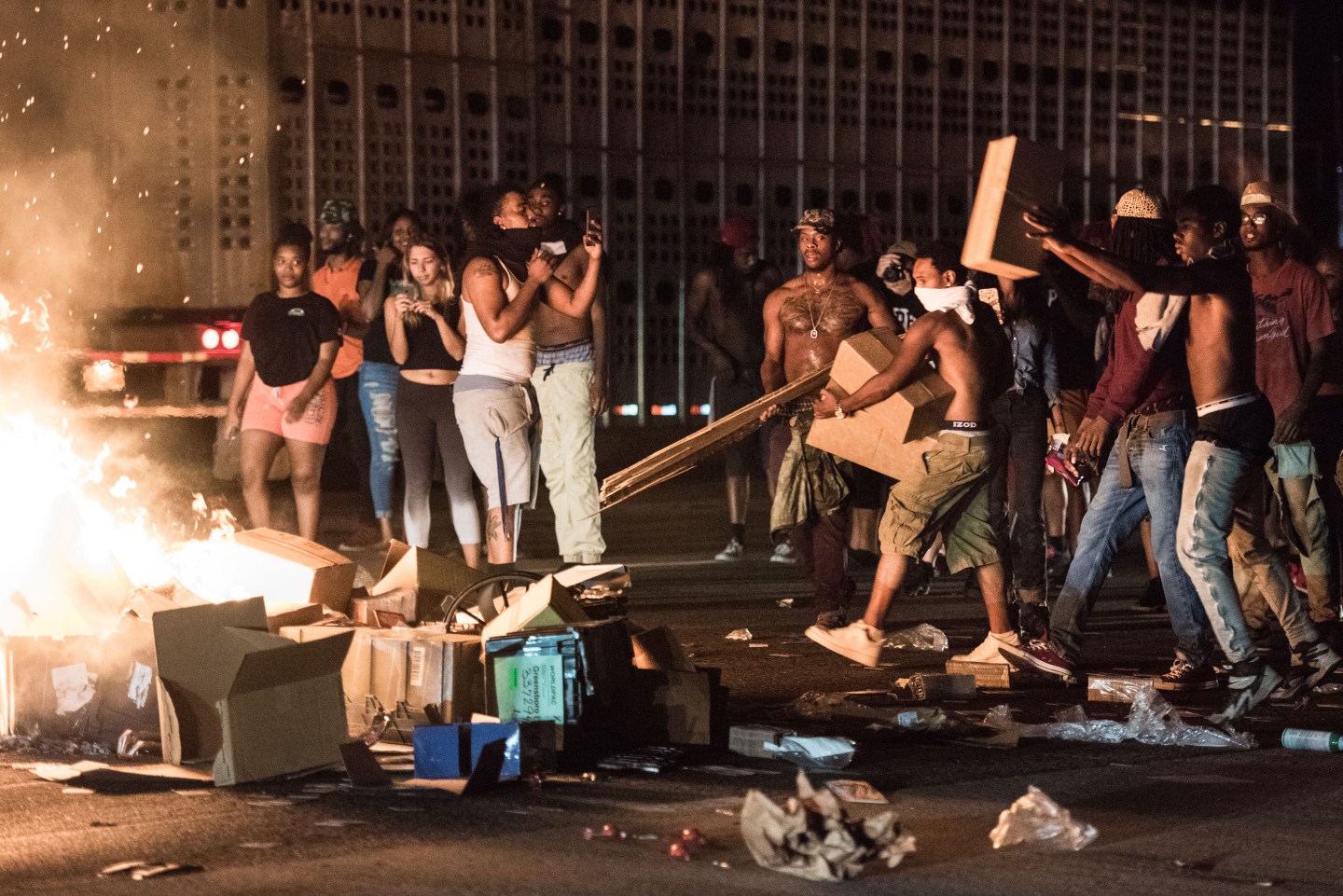 Protestors put cargo from tractor trailers onto a fire on I-85 (Interstate 85) during protests following the death of a man shot by a police officer September 21, 2016 in Charlotte, North Carolina. The protests began last night, following the fatal shooting of 43-year-old Keith Lamont Scott at an apartment complex near UNC Charlotte.
Photograph by Sean Rayford—Getty Images

Protesters blocked a highway and clashed with police in Charlotte, N.C., early on Wednesday morning after officers fatally shot a black man they said had a gun when they approached him in a parking lot.

About a dozen officers and several protesters suffered non-life threatening injuries during an hours-long demonstration near where Keith Lamont Scott, 43, was shot by a policeman on Tuesday afternoon, police and local media said on social media.

Early Wednesday morning, protesters blocked Interstate 85, where they stole boxes from trucks and started fires before police used flash grenades in an attempt to disperse the angry crowd, an ABC affiliate in Charlotte reported.

A group of protesters then tried to break into a Walmart (WMT) store before police arrived and began guarding its front entryway, video footage by local media showed.

Earlier in the evening, police in riot gear reportedly used tear gas on protesters who threw rocks and water bottles at them as they wielded large sticks and blocked traffic. One officer was sent to the hospital after being struck in the head by a rock, police said.

“The community deserves answers and (a) full investigation will ensue,” she said on Twitter, adding in a subsequent post, “I want answers too.”

Scott was shot by officer Brentley Vinson earlier in the day, according to Charlotte-Mecklenburg police. The shooting occurred when officers were at an apartment complex searching for a suspect with an outstanding warrant and they saw Scott get out of his vehicle with a firearm, the department said.

Vinson fired his weapon and struck Scott, who “posed an imminent deadly threat to the officers,” the department said in a statement.

Vinson, who joined the Charlotte police force in July 2014, is black, according to the department. He has been placed on paid administrative leave.

The fatal shooting came amid an intense national debate over the use of deadly force by police, particularly against black men.

Police did not immediately say if Scott was the suspect they had originally sought at the apartment complex. WSOC-TV, a local television station, reported that he was not.

Detectives recovered the gun Scott was holding at the time of the shooting and were interviewing witnesses, police said.

Protesters and Scott’s family disputed that the dead man was armed. Some family members told reporters that Scott had been holding a book and was waiting for his son to be dropped off from school.

Shakeala Baker, who lives in a neighboring apartment complex, said she had seen Scott in the parking lot on previous afternoons waiting for his child. But on Tuesday, she watched as medics tended to Scott after he was shot, she said.

“This is just sad,” said Baker, 31. “I get tired of seeing another black person shot every time I turn on the television. But (police are) scared for their own lives. So if they’re scared for their lives, how are they going to protect us?”

About 200 people gathered earlier Tuesday night for a peaceful protest in Tulsa, Oklahoma, where a white officer killed an unarmed black man last week in an incident captured on police videos.

Lawyers for the family of Terence Crutcher, 40, disputed that he posed any threat before he was shot by Tulsa Officer Betty Shelby after his sport utility vehicle broke down on Friday.