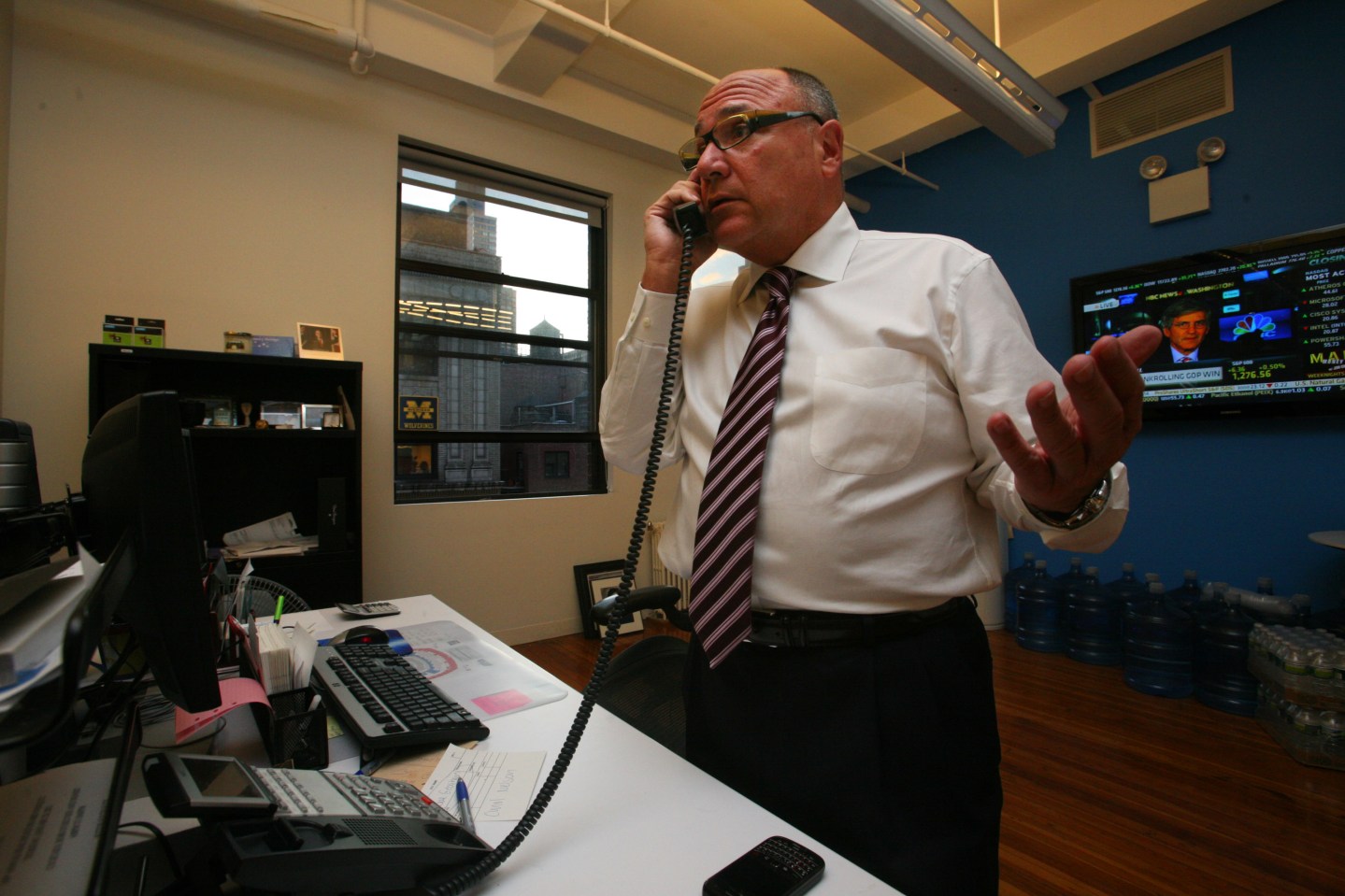 20110105 New York (RGL) Ticket master Richard Ebers has recently been hired as chief sales officer at INSIDE Sports and Entertainment Group. He was photographed at the office located at 33 E 33rd Street along with INSIDE president Alan Baum and partners and staff. He was also photographed in his car service vehicle on his way home to his upper westside apartment, where he keeps in his son's room a collection of sports memorabilia including autographed baseballs, a Braves jersey signed by Hank Aaron after his 755th homerun,, a Derek Jetter arena seat #2 (Jetter's number), 3rd base from '96 World Series, and boxer Joe Lewis photo. Nicole Bengiveno / New York Times NYTCREDIT: Nicole Bengiveno/The New York Times Published 02-06-2011: Admit One Richard Ebers, the Ticket Man, sells entry to elite events. (Nicole Bengiveno/The New York Times)
Photo by Nicole Bengiveno — The New York Times/Redux

Richard Ebers is the ticket broker to tycoons, known for being able to get hedge fund honchos behind homeplate for the World Series, or real estate moguls courtside at the U.S. Open.

He’s also been, in recent years, the Trump Foundation’s biggest benefactor, far bigger than Donald Trump himself, who stopped funding his own foundation long ago.

A recent Washington Post investigation found that Trump, through his charity, has been giving away other people’s money both to charities, and for questionable purposes, including $258,000 to settle lawsuits.

Of late, most of that “other people’s” funding has flowed from one source: Ebers.

From 2011 to 2014, the last year for which records are available, Ebers donated $1.9 million to the Trump Foundation. Those gifts accounted for 58% of the $3.27 million that the charity raised in total during those four years, and 45% of every dollar that it distributed to dozens of philanthropic organizations, as well as for questionable recipients.

In 2014, for example, Ebers’ $539,450 donation equaled 96% of all the newly-raised funds that went into the Foundation’s coffers, and 88% of the dollars it paid out. Over those four years, the foundation’s second largest benefactor was NBC Universal, which gifted $500,000 in 2012, but made no other donations. So Ebers alone gave almost four times as much money as the media colossus runner-up, and ranked first each of the last four years for which IRS filings are available.

Trump hasn’t donated to his eponymous foundation since 2008.

From 2011 to 2014, the Trump Foundation attracted only 12 donors. Just two gave money more than once: Prestige Mills, a wholesale carpeting manufacturer in Long Island City ($34,000 total), and the Charles Evans Foundation in Princeton, NJ, ($100,000). Charles Evans, who started the foundation in 1988 and died in 2007, was the brother who Robert Evans, the Hollywood titan who produced The Godfather, Rosemary’s Baby, and Chinatown. Charles Evans made his own foray into the film world when he bought the rights to the screenplay that became the basis for the 1982 smash hit Tootsie, and later started a real estate investment firm. It’s not clear if Trump was involved in property deals with Evans.

As for Ebers, the public got a single, and hilariously memorable, look at the “Ticket Man” courtesy of a long profile in early 2011. The New York Times story, “Best Seats in the House,” by N. R. Kleinfield, described Ebers as a creature of the telephone who regularly juggles three customer calls who while sitting “at the ticket equivalent of a commodities trading desk flanked by jabbering young men and women.” He affectionately calls people, “Boobie.” The article said Ebers earned in the high six figures, or low seven figures, a year.

At the time, Ebers was chief sales officer for Inside Sports & Entertainment Group, whose business extended far beyond reselling tickets to booking at super-exclusive hotels, obtaining passes at the world’s best golf courses, and getting tables at culinary venues where last-minute reservations are otherwise impossible, as well as organizing meet-and-greets with celebrities, including visits to the set of the HBO series Entourage. The only Yelp review of Inside Sports from 2013 gave it five stars.

In 2014, talent agency CAA purchased Inside Sports and integrated Ebers and his team into its CAA Premium Experience, described in press releases as a “full service event management and marketing practice.”

The Times story vividly portrays a rotund showman nicknamed “Fats” in his youth who’s just as entertaining to be around as the sold-out comedy shows he’s hawking. “I send out an electrifying vibe,” Ebers told the Times reporter while sticking out his arm. “You can touch me, and you wont get shocked.”

According to the Times story, Ebers stated that he sold around $10 million in tickets in 2010, and has 500 or so core clients, among them executives at Goldman Sachs, J.P. Morgan Chase, and Morgan Stanley, as well as wealthy financiers of all stripes who want great seats in a jiffy, the price be damned.

The mystery is why Ebers gives so much money to the Trump Foundation. In effect, he’s letting Trump choose the roster of charities his dollars eventually benefit. Ebers is extremely generous with other causes as well. He’s contributed and helped raise millions of dollars for New York University’s Hospital for Joint Diseases, which recognized his contributions by naming one of its branches the Ebers Center for Foot Deformity. Still, donating an average of almost $500,000 annually to the Trump Foundation, given his means, appears exceedingly philanthropic.

The Ebers and Trump businesses are complementary. Trump owns luxury hotels, including Mar-a-Lago in Palm Beach, and prestigious golf courses. Ebers, or his team, secure reservations at the best venues, and arrange golfing vacations, for their Wall Street and other wealthy clients. On its website, Inside Sports listed Trump Turnberry, the tycoon’s course in Scotland, as a resort where it can arrange for reservations and tee times.

But whether Trump does major business with Ebers isn’t known, at least so far. Fortune left a message for Ebers at CAA Premium, but has not received a call back. An email to the Trump campaign inquiring about Eber’s friendship and/or business relationship with Trump hasn’t been returned.

We do know that Donald Trump loves larger-than-life characters, a gallery that included crazy-coiffed fight promoter Don King, notorious legal scoundrel Roy Cohn, and toupeed gadfly limousine purveyor-to-the-stars Bill Fugazy. Ebers would fit easily in this collection. Trump has every reason to love Ebers, who rivals the biggest of those stadium-sized personalities.

It’s also reasonable to assume that contributions “cost” Ebers a lot less than they would cost Trump, just as they would most other people. The Donald acknowledges that he pays little in federal taxes, so he wouldn’t benefit much, if at all, from deductions from charitable donations. Ebers, a New Yorker, like most affluent donors probably gets a nice deduction for his contributions.

But tax deductions may not be the only reason. If Trump’s elected, you can imagine Ebers joking with the new president about his deal of a lifetime: selling tickets to the Lincoln bedroom.