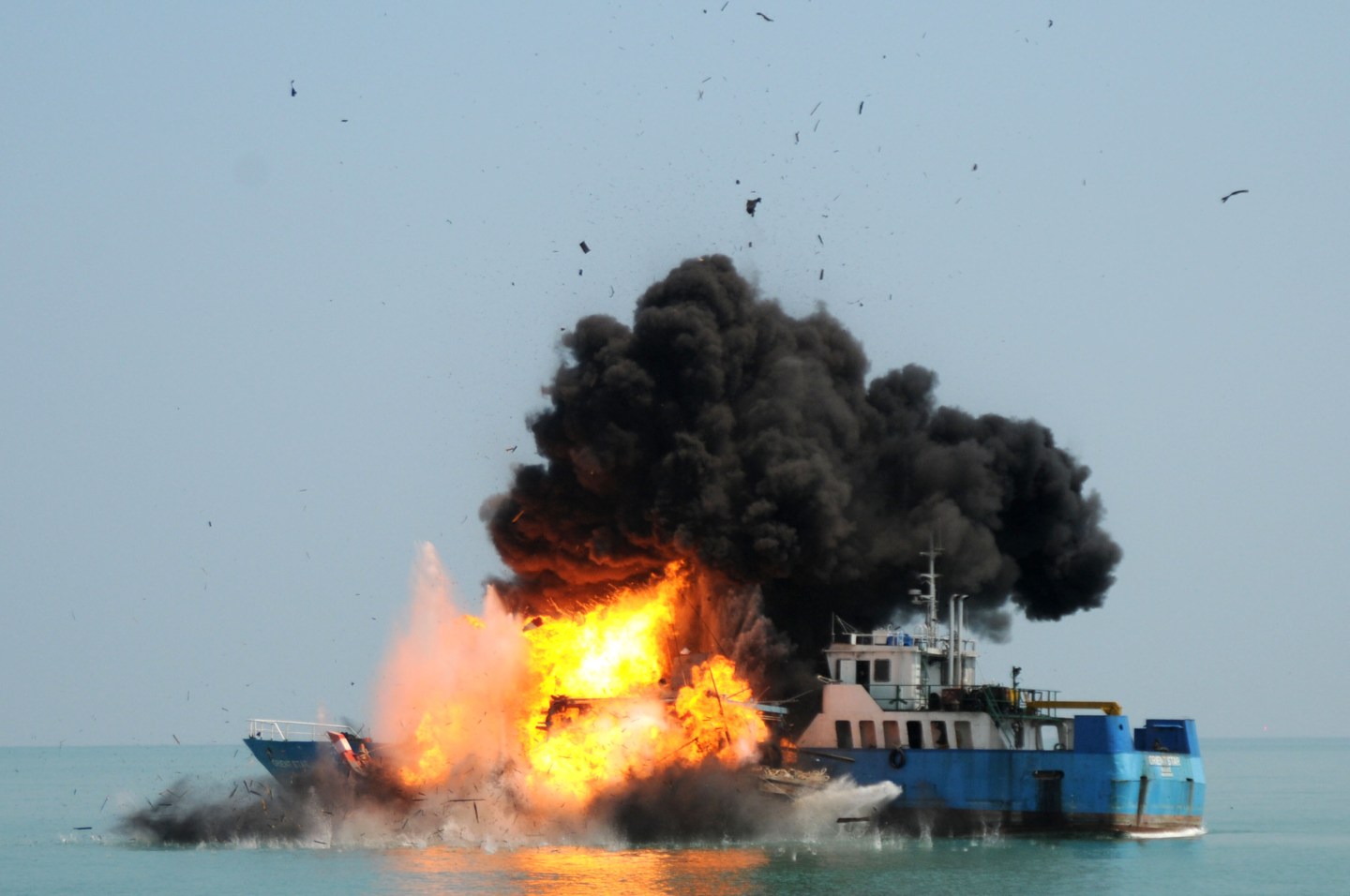 It’s not easy to forget the image of boats being blown up at sea—and that’s how the Indonesian government wants it, if its hardline approach to illegal fishing is to mean anything.

Fisheries minister Susi Pudjiastuti defended the policy of blowing up seized fishing boats in an interview with Bloomberg published Monday, saying defense of the territory has started to show results, bringing down overfishing and raising the prospect of a normalized fishing industry within the next two to three years.

It’s the new normal: one that strikes a dramatic departure in the country’s history of tussling with foreign boats that entered its waters—sometimes with armed guards from their home nations—and collected billions in annual revenue that should have gone to Indonesia, according to World Bank estimates.

No longer. Since the end of 2014, Pudjiastuti’s administration has destroyed as many as 220 trespassing foreign boats, according to Bloomberg, some of which were coordinated to go down simultaneously and even captured on live-streams.

“We catch them and we sink them,” said Pudjiastuti. “That’s the new rule, the national consensus.”

The minister framed the fiery seizures as a necessary boost to the economy as other sectors fall behind, saying, “Fisheries is the only one growing [as] mining is going down, everything is going down.” Among Pudjiastuti’s other new initiatives were the restrictions of commercial fishing areas and the ban of transshipment at sea, The Guardian reported.

As a particularly triumphant explosion made headlines in March, Pudjiastuti warned that no one would be exempt from the crackdown. “This is to serve as a deterrent to others. You may go freely in the rest of the world, but once entering Indonesia, this is the consequence,” she said. “If there is an illegal fishing boat from America, we will also sink it.”

Tough talk aside, Indonesian officials have been careful to emphasize that their determination is not an armed territorial expansion.

“Some of the risk in our region nowadays is precisely the risk of misperception, miscalculation, minor incidents becoming bigger crises,” the country’s former foreign minister, Marty Natalegawa, told Bloomberg last month. “The region as a whole should not lose the habit of open dialogue and diplomatic communication.”

While Pudjiastuti acknowledged a strain with China over the seizure of its fishing boats, “I don’t think there’s any problem with the relationship,” she said.

The U.S., too, is proving an important partner for Indonesia’s efforts, with USAID in December pledging $33 million over five years to help protect the archipelago’s fishing industry and marine resources.

While the crackdown has been cheered by many Indonesians, critics have also expressed concern that the high-profile explosions could have led to the leaking of pollutants in the water, such as hydraulic fluid, oil, lead paint, or asbestos, according to The Washington Post.