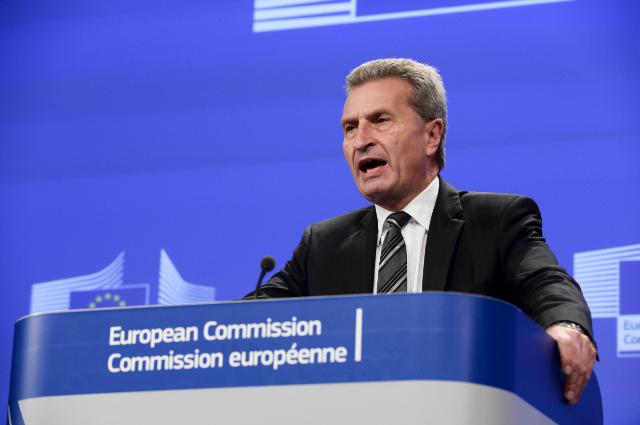 There’s a lot to like about the copyright proposals that the European Commission unveiled Wednesday—easier access to video across the EU’s internal borders, more copyright exceptions for researchers, and more access to books for blind people.

However, two elements in particular could be disastrous if carried out as proposed. One would make it more difficult for small news publications to be able to challenge legacy media giants, and the other would threaten the existence of user-generated content platforms.

In a way, it’s good that digital commissioner Günther Oettinger has finally laid his cards on the table. But the battles that begin now will be epic.

The first contentious proposal is the introduction of so-called neighboring rights for press publishers, also known as ancillary copyright.

The move sounds pretty obscure, but isn’t. Much as it is possible for someone to get rewarded for performing a work—as opposed to writing it, which involves copyright—publishers would get to command fees for the stuff their writers write, based their own (new) rights rather than the copyright held by the journalist.

In effect, this would allow publishers to try wrangling fees out of others for any “use of the work”—a dangerously vague term in this context. What’s more, they’d get to do so for a whopping 20 years after publication.

This idea has been tried before in Germany and in Spain, where large publishers used new laws to try getting Google (GOOG) News to pay for using snippets of their text and thumbnails of their images.

Both times the attempts failed. In Germany, Google stopped reproducing snippets of text in Google News, and the publishers granted the firm a free (albeit temporary) licence once they saw how their traffic suffered. In Spain, the publishers had no such leeway and Google News ended up pulling out of the country, hammering the industry’s income in the process.

The Commission’s new proposals aren’t as suicidally rigid as what went down in Spain, but they’re also much vaguer than the German version. As currently phrased, they could allow press publishers to try charging for the reproduction of headlines, or even the mere indexing of their articles.

It’s hard to know whether the large press publishers who lobbied so hard for these measures really think Google will ultimately pay up, or whether their real goal is what happens when it refuses.

Because Google surely won’t pay for indexing their content or reproducing snippets of their text. It can’t—that would be the beginning of the end of its entire search engine business model, which can no longer scale if its links come with a cost.

If this law goes through and demands for licensing fees are rigidly enforced, Google will almost certainly pull Google News out of the entire EU.

Remember that it doesn’t run ads on Google News. It does run ads on its regular search engine, of course, and news results make that a fuller product, but it would have no reason to maintain Google News in Europe if it became a serious financial liability.

And if Google News exits the EU, the biggest victims will be the smaller publications, as happened in Spain. They rely on Google News and other aggregators because that’s how people find their articles, visit their sites, and view and click on their ads.

More established media outlets have much more brand recognition and traditional marketing clout, particularly in linguistically semi-closed markets such as Germany and France. They have everything to gain from reversing the Internet’s opening up of the media market; their rivals, and the reading public, have everything to lose. No wonder they’ve been pushing Oettinger to bring in ancillary copyright.

The other major flaw in the new proposals would also be bad news for smaller players, and for the rights of the public.

Under the e-Commerce Directive of 2000, the operators of user-generated content platforms—YouTube and SoundCloud and the like—are not liable for the content their users upload, as long as they take down the illegal stuff once someone flags it. That directive also explicitly says there can be no laws forcing platforms to generally monitor the content they manage.

Despite having consistently denied it is going to change these rules, the Commission is now proposing exactly that. In its new copyright directive proposal, it wants to force all user-generated content platforms to use “effective content recognition technologies,” which sounds an awful lot like generally monitoring content.

For more on copyright, watch our video:

Of course, YouTube already has its Content ID technology for identifying and purging illegally uploaded films and so on, but what about new platforms? It cost Google more than $60 million to develop and implement Content ID, and it has to constantly tweak it to counteract those users who figure out ways to get around it.

You know how people upload movies to YouTube that are re-filmed from a funny angle, or that cut off the edges of the screen? That’s an attempt to circumvent Content ID and fighting it costs money, as does handling disputes when the system incorrectly flags videos as infringing copyright.

Quite apart from the fact that this would clash with another piece of EU legislation that’s trying to protect freedom of expression, this would be a huge burden for anyone trying to set up a new user-generated content platform, making it a problem for both innovation and competition.

Yes, creators deserve fair remuneration for the works they create. Yes, the Internet has turned their livelihoods upside-down by forcing them to compete with millions of rivals in an open market. Yes, lack of funding threatens media diversity. Yes, change is hard.

But these new proposals wouldn’t help creators make the best of the new landscape. All they would do is entrench the positions of the big players—the legacy media outlets in the case of ancillary copyright, and funnily enough Google in the case of the user-generated content proposals.

The European Parliament and the EU’s member states have a lot to fix over the next year or two, as this proposal wends its way through the legislative process.