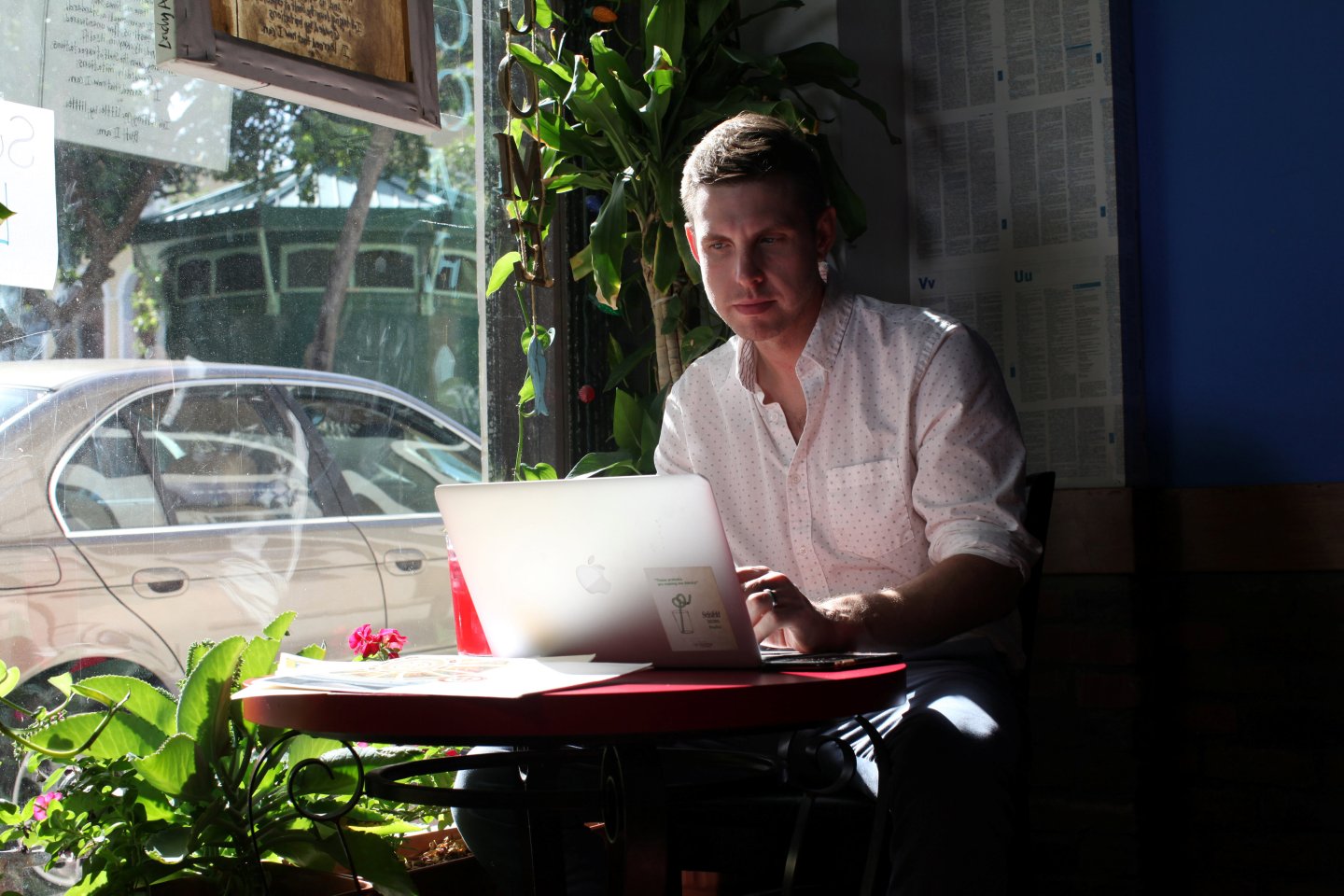 It began with what felt like a punch in the throat.

I assumed it was irritation from the cigar I’d smoked on my deck that afternoon in mid-June. But the sensation hung on. Within three days, I had a 102-degree Fahrenheit (38.9 degrees Celsius) fever, chills and bed-drenching night sweats.

For two weeks, symptoms came in waves. A skin rash. Joint pain. Then a dull throbbing behind my eyes. There was pain and redness too, in a certain exclusively male region, which ibuprofen didn’t relieve.

Then, I felt better. But a week later, the symptoms staged a comeback, with more eye pain and something new – small welts on my eyelids and temples. I had sporadic headaches, was so exhausted I slept 10 hours a night and even failed to wake up for a flight.

My mother was the first to suspect I was infected with the virus that arrived in Puerto Rico in December 2015, four months after I’d begun an assignment as Reuters’ San Juan bureau chief.

Initially, I laughed off her internet diagnosis as the overwrought worries of a long-distance mom. But I agreed to see my long-time physician during a visit home in late June.

After listening to my symptoms and learning I’d been working in San Juan, Dr. Kevin Wallace of Murray Hill Medical Group called the New York City Health Department and arranged to have my blood sent for screening. Eight days later, I got the news.

Mom was right. I had Zika.

Hundreds of thousands of people are estimated to have been infected with Zika in the Americas since the virus was detected in Brazil early last year. Most have no symptoms or experience only a mild illness.

But it can penetrate the womb in pregnant women, causing a rare but crippling birth defect known as microcephaly. In adults, it has been linked to Guillain-Barre syndrome, a temporary paralysis. And it can be passed on through sex, a unique characteristic among mosquito-borne viruses. There is no vaccine or treatment.

Last month, the U.S. government declared a public health emergency in Puerto Rico, the hardest hit among states and territories. More than 17,800 infections have been reported on the island, including more than 1,500 among pregnant women, and one case of microcephaly in an aborted fetus.

As a journalist and a patient, I’ve had access to some of the brightest minds studying Zika. But the virus has confounded experts at the highest levels and launched a global race to understand its risks.

Each month, new findings have led to changes in how the public is advised to stay safe. Compared to what we know about other diseases, such as flu and even Ebola, we are in new territory.

In my case, doctors were hard-pressed to explain why my symptoms returned about three weeks after the initial infection. Nor could they tell me how long I could be at risk for Guillain-Barre. Another mystery: were condoms enough to protect against sexual transmission?

In the weeks since I’ve recovered, that is proving to be one of the toughest questions to live with.

Both men and women can infect their sexual partners. In one case, scientists identified Zika virus in semen six months after the man’s symptoms appeared, though it’s not clear how long it can cause new infections.

Public health officials have warned couples not to conceive for at least six months after either a man or woman returns from a Zika outbreak area, even if they show no symptoms.

My wife and I, both in our early 30s, have had to consider how dangerous my bout with Zika could be to our plans to have children some day.

Our most intimate decisions now are affected by the uncertainty surrounding Zika: how long can I infect my partner? How likely is it that my baby would become sick if I do? Given how rapidly the expertise about Zika has evolved so far, how much faith should we put in the current thinking?

When I took the one-year post in Puerto Rico, I figured my biggest health risk would be sunburn.

Even when Zika began circulating on the island, I didn’t worry. My wife Julie, a lawyer and publishing industry pro, had decided to stay at home in Brooklyn during my assignment, and we weren’t planning to have kids for at least a couple of years. So we gave Zika little more than a shoulder shrug.

I’m not sure when I was infected. I picked up more mosquito bites in San Juan than Twitter followers. I didn’t always use bug spray. I worked from home, an apartment in a colonial building without window screens, and kept the deck doors open to save money on air conditioning.

Locals are used to mosquito-borne illnesses, including dengue and chikungunya. Some, more concerned about pesticides than Zika, successfully fought aerial spraying with Naled. Many also are concerned about Zika’s threat to tourism, which could compound the island’s vast economic challenges.

One friend grew indignant when I mentioned writing this piece. “You’re a journalist,” she said. “You have a responsibility not to perpetuate hysteria.”

When I got sick, I didn’t consider going to a doctor in Puerto Rico. The economic crisis has made medical care unpredictable, and the waits are long. When I sought treatment for allergic reactions earlier in my stay, doctors refused my corporate health insurance and demanded cash.

Instead, I waited a few days to see Dr. Wallace during my visit to New York. I was his second potential Zika patient, though the first ultimately tested negative for the virus.

Eight days after my blood sample was submitted, a woman from the city health department called.

Have you heard from your doctor? she asked.

I broke a long pause, saying, “Feel free to let the cat out of the bag.”

“Well,” she said, “you tested positive for Zika.”

The way it is supposed to work, the results are sent to the patient’s doctor in time to break the news before the city “interviewer” calls to address public health concerns. But Dr. Jay Varma, deputy commissioner of the New York City Health Department, acknowledged that doesn’t always happen.

Some friends in Puerto Rico teased me when they learned I had Zika. Many of them had experienced chikungunya or dengue, and had stories about months of muscle pain or weeks in bed. Friends from the states, on the other hand, showed grave concern, offering thoughts, prayers and condolences. Some kept their distance for weeks. A few questioned whether it was safe for me to be around babies.

The evidence shows Zika clears the bloodstream quickly, and the virus doesn’t spread through casual interactions.

Julie and I weren’t quite sure how to react. We didn’t take it too seriously at first. I posted a glamour-shot selfie on Facebook with the caption: “This is the face of a man with Zika.”

As the weeks passed, it became clear that Julie and I were also a little rattled – and not fully on the same page. She canceled a planned long weekend visit to Puerto Rico. She wanted to minimize her exposure to Zika and arranged instead for us to meet in Florida.

This disappointed me. I had hoped to show her my new favorite places on the island. I clung stubbornly to the view that Zika fears were largely overblown. She reminded me that, given the unknowns about Zika’s impact on pregnancy, I was in no position to call the shots.

“Try to see it from a woman’s perspective,” she said.

We have heard a lot of different things about Zika, even from doctors, and she doesn’t totally trust the idea that the virus is manageable with the current medical advice.

What if Zika poses a threat for months or years after infection? If so, could that jeopardize our future plans to start a family? What if we got pregnant before we planned to?

We’ve had to manage our different anxieties over the “what ifs” of Zika.

There’s plenty the experts are still figuring out, and that has been reflected in the shifting opinions about my case.

Ingrid Rabe, an epidemiologist with the U.S. Centers for Disease Control and Prevention, told me Zika generally lasts a few days. While she couldn’t address my specific case, she speculated that a return of symptoms like mine could indicate the presence of a second virus.

A few weeks later, Dr. Varma told me it was possible, in severe cases, for symptoms to last longer or recur.

Of three acquaintances in Puerto Rico who developed Zika, all have complained, like me, of lingering health problems, in one case for longer than a month.

Two weeks into my infection, Dr. Wallace couldn’t tell me whether I remained at risk for Guillain-Barre. The city health interviewer, after consulting with doctors, told me the paralyzing condition would most likely have set in within days of Zika infection, so I was probably out of the woods.

Again, the information shifted over time. The CDC’s Rabe later told me it could take “a few weeks” for Guillain-Barre to appear. So far, I haven’t had any symptoms consistent with Guillain-Barre, and here’s hoping it stays that way.

Guidance on sex lacked precision as well. The city health interviewer recommended we “use condoms every time” for six months, reflecting CDC guidelines.

When I asked whether Zika can spread via saliva or oral sex, the city health interviewer didn’t answer directly. She said it can spread via “sexual activity,” and that saliva is “currently not being tested.” Rabe later told me “there’s been no evidence” that saliva can spread Zika.

The city health interviewer asked if I would join a CDC study gauging how long Zika can be spread through semen and urine. I’m one of 140 participants, though protocol calls for up to 250.

The study is a bit awkward. But, as a writer always looking for a good story, I could not pass it up.

See also: Alphabet and Sanofi Set Up a Joint Venture in Diabetes Treatment

Every two weeks, a study test kit arrives by FedEx in a box with dauntingly detailed instructions on how to produce and package my samples, then overnight them back to the center’s Colorado lab. I also answer a somewhat blush-inducing questionnaire about my recent sexual activity.

The CDC staffer assigned to my case sends cheery emails to let me know she has received my samples and sex report, an interaction that feels slightly too intimate. But I endure it in exchange for a $50 Visa gift card for each sample, and, more importantly, for the chance to learn and to contribute to science.

The downside: I don’t learn my results until the study ends in December.