Here’s Why Ecuador’s $9.5 Billion Judgment Against Chevron Is Headed to Canada 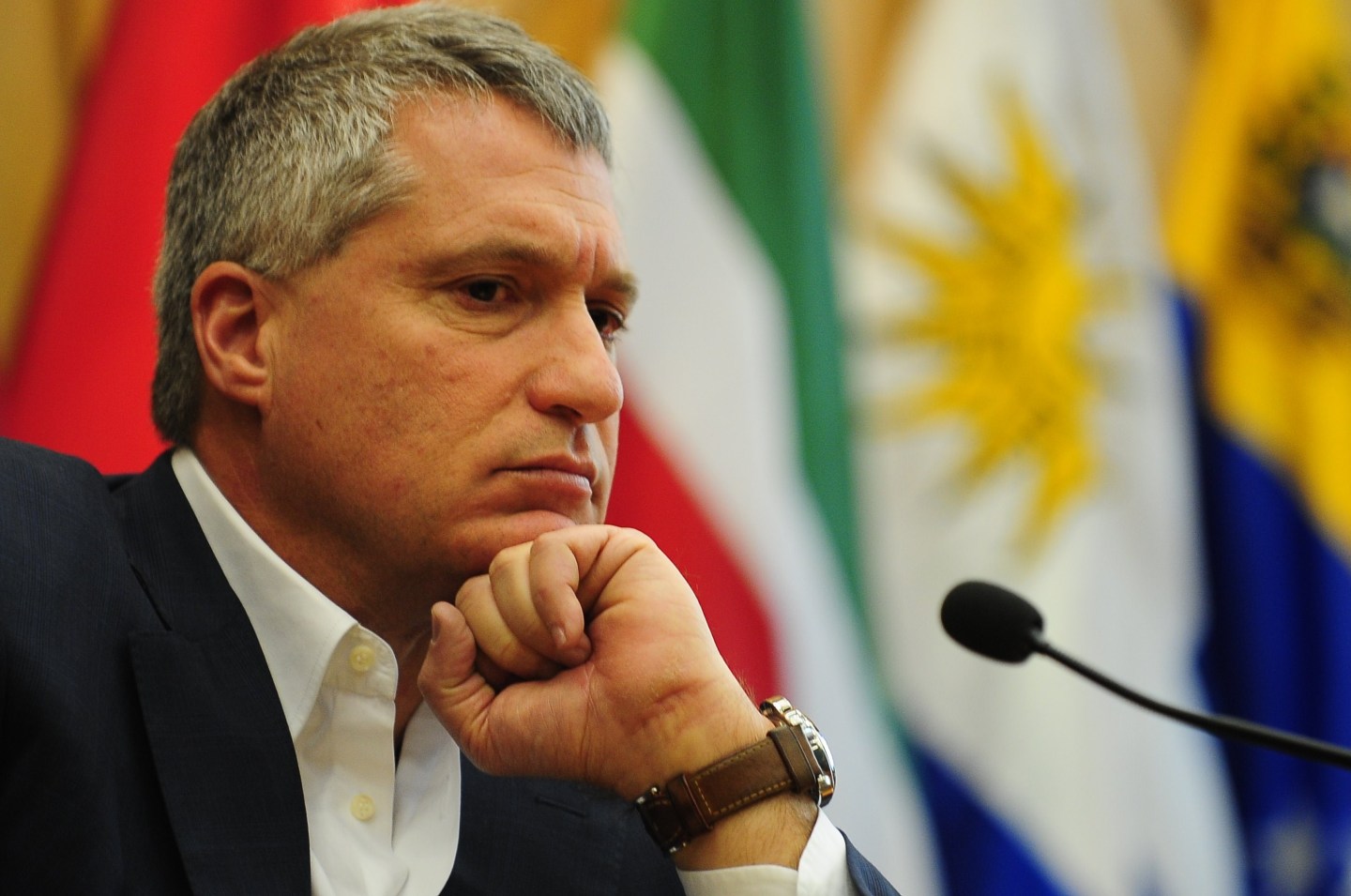 The lawyer of Ecuadorean people affected by Texaco-Chevron --who have long sought compensation for pollution between the 1970s and early 1990s-- Steven Donziger, gestures during a press conference on March 19, 2014 in Quito. Earlier this month, a US judge upheld Chevron's allegations that an Ecuadoran court decision ordering it to pay $9.5 billion for oil pollution in the Amazon jungle was fraudulently obtained. Donziger announced they will appeal against this decision. AFP PHOTO / RODRIGO BUENDIA (Photo credit should read RODRIGO BUENDIA/AFP/Getty Images)
Rodrigo Buenida/AFP—Getty Images

The rumble in the jungle over a decades-old environmental disaster in the Amazon allegedly caused by Chevron is about to get noisy again.

This week, the Ecuadorians suing the oil giant take their case to Toronto in an effort to get a Canadian court to enforce a controversial $9.5 billion judgment won against Chervon (CVX) in a provincial court in Lago Agrio, Ecuador, in February 2011.

Although their lawyers and spokespeople head north armed with heroic narratives, they are running low on credibility.

Last month, the Ecuadorians suffered a devastating setback. A U.S. Court of Appeals for the Second Circuit in New York issued a sweeping and unanimous, 127-page affirmation of an earlier ruling , by U.S. District Judge Lewis Kaplan, that the $9.5 billion judgment, upheld by two Ecuadorian appeals courts, had been tainted by layer after sordid layer of fraud, bribery, evidence tampering, and other shenanigans.

Presiding in a civil racketeering suit brought by Chevron in Manhattan, Kaplan blocked the plaintiffs from trying to collect on the judgment in the U.S., and barred their chief U.S. lawyer and strategist, Steven Donziger, from collecting any fees from the judgment.

Donziger has denied wrongdoing. He and the Lago Agrio plaintiffs will likely move for rehearing—a long shot—and, failing that, petition for U.S. Supreme Court review. (The plaintiffs’ and Donziger’s press statements reacting to the Second Circuit ruling is here, and Chevron’s is here.)

Since Chevron has virtually no assets in Ecuador, the plaintiffs must try to enforce their judgment (i.e., collect on it) elsewhere, and they have sought to do so by, so far, filing suits in Argentina, Brazil, and Canada, where Chevron subsidiaries do business. But the cases in Argentina and Brazil are proceeding slowly, and prospects do not look great. The attorneys general of each of those countries has recommended to their court systems that they not honor the Ecuadorian judgment in light of the evidence that it was obtained by corrupt means. (Late last year, Chevron also won an order from a Gibraltar court barring a corporation the plaintiffs set up there—to pool investors’ moneys and collect and distribute any funds eventually recovered from the judgment—from continuing operations in light, once again, of evidence that the judgment had been procured by fraud.)

That leaves Canada, where the plaintiffs face some serious legal hurdles which will now be reviewed with the echoes of the Second Circuit’s thunderous ruling still reverberating in the background.

A spokesperson for the Ecuadorian plaintiffs acknowledged last month that their lawyers were “shocked” by the Second Circuit’s ruling. Back in 2012 a panel of that court had reversed Kaplan on a point of law, and their team had confidently predicted that it would do so again. It now appears that they had been greatly over-reading the breadth of the court’s earlier ruling.

Worse still, given Donziger’s efforts to politicize the case in liberal-versus-conservative terms—at its core, after all, it is supposed to be about third-world people vindicating ecological and human rights abuses—the unanimous ruling was written by Judge Amalya Kearse, a Jimmy Carter appointee. Indeed, of the four U.S. judges to now rule against Donziger in Chevron’s Racketeer-Influenced and Corrupt Organizations Act case, three, including Kaplan, have been liberal-to-centrist appointees of Democratic Presidents. (I’m counting as a Democratic appointee Circuit Judge Barrington Parker, Jr., who was nominated to the bench by Bill Clinton, though he was later elevated to the appeals court by George W. Bush.)

So far, the U.S. judges have seen the case as being about the rule of law, which they have been unwilling to see trumped by sloganeering about a presumptively noble underlying cause that, as they see it, has yet to be proven by legitimate means.

“Justice is not served by inflicting injustice,” Kaplan wrote in 2014, in lines unanimously endorsed by the Second Circuit last month. “The ends do not justify the means. There is no ‘Robin Hood’ defense to illegal and wrongful conduct.”

(The underlying case involves pollution allegedly left behind after Texaco drilled for oil between the mid-1960s and 1992 as a partner in a consortium with Ecuador’s state-owned oil company. Texaco was acquired by Chevron in 2001.)

In Canada, once again, the plaintiffs hope that the presumptive nobility of their cause will lift them over substantial legal hurdles, and that Canadian law and respect for “international comity” will constrain its courts to blindly accept the Ecuadorian judgment without peering into the sausage factory that may have generated it.

But the key arguments next week in the Ontario Superior Court of Justice will likely be dry, prosaic ones. Chevron Corp. itself—i.e., the parent company, which is a Delaware corporation based in San Ramon, Calif.—has no assets in Canada. So the Lago Agrio plaintiffs have also sued Chevron Canada Limited, which has billions of dollars worth of assets, including the Athabasca Oil Sands Project, exploration projects in the offshore Atlantic and in the Western Arctic, liquified natural gas projects, and a refinery in British Columbia.

The hurdle, of course, is the basic doctrine of “corporate separateness.” It generally holds that, absent special circumstances, a parent company isn’t liable for its subsidiary’s liabilities and vice versa. Chevron Canada—a seventh level, indirect subsidiary of Chevron Corp. set up in 1966 and currently based in Calgary, Alberta—has never done business in Ecuador, wasn’t sued there, isn’t accused of wrongdoing, and shares no executives or board members with Chevron Corp.

Chevron and Chevron Canada have each moved for summary judgment, asking that Chevron Canada be dismissed from the case. That’s one of the motions being heard next week. (In the other, the plaintiffs are asking for all of Chevron’s defenses—relating to fraud, etc.—to be dismissed as violating international comity, which is the concept that nations must respect each others’ independent sovereignty and, therefore, court rulings. The plaintiffs also claim that Canadian precedents severely restrict their courts’ leeway to look behind the legitimacy of foreign judgments when asked to enforce them. Chevron protests that the precedents actually back its position.)

Although there are situations in which courts will “pierce the corporate veil,” holding subsidiaries liable for parents’ or affiliate’s wrongs, Chevron claims none apply here.

On the other side, the plaintiffs will likely contend that Chevron Corp. so dominates the operations of Chevron Canada that they should be considered one and the same. But since Chevron and its subs have routine corporate relationships, such arguments run the danger of interpreting the corporate separateness doctrine out of existence.

The plaintiffs will also argue that the court must pierce the veil to achieve fundamental fairness—relying, again, on the assumption that their underlying cause is just, that the Ecuadorian courts acted properly (or, at least, tolerably), that Judge Kaplan was biased, and that Chevron can’t complain about corruption in Ecuadorian courts because, in the early 2000s, it successfully moved to dismiss an earlier version of the suit, filed in Manhattan, on the grounds that Ecuador was the appropriate forum.

Still, the plaintiffs have an uphill battle. In 2012, a different judge of the same Canadian court, Justice David Brown, attempted to stay the plaintiffs’ case against Chevron indefinitely on several grounds, including his observation—without briefing—that he couldn’t see any reasonable likelihood that the plaintiffs could surmount the corporate separateness hurdle. The upper courts reversed him, finding that he had jumped the gun, but that he could take up the separateness question later, if and when Chevron filed a motion for summary judgment on that issue.

Now it has. If Chevron Canada is dismissed from the case, that would leave just Chevron Corp., which has no assets in Canada. Chevron would then argue that the action should not proceed, according to a company spokesman.

Karen Hinton, who represents the Amazon Defense Front—a group that brought the case and is charged, in the Ecuadorian judgment, with collecting and distributing the potential recovery—says the plaintiffs will try to persuade the court to go forward even without Chevron Canada, even if there are no Canadian assets to collect against.

“Recognition has an independent value,” she said in an email. “We can use it in all sorts of ways—including in other countries, even if we can’t [recover] assets in Canada.”