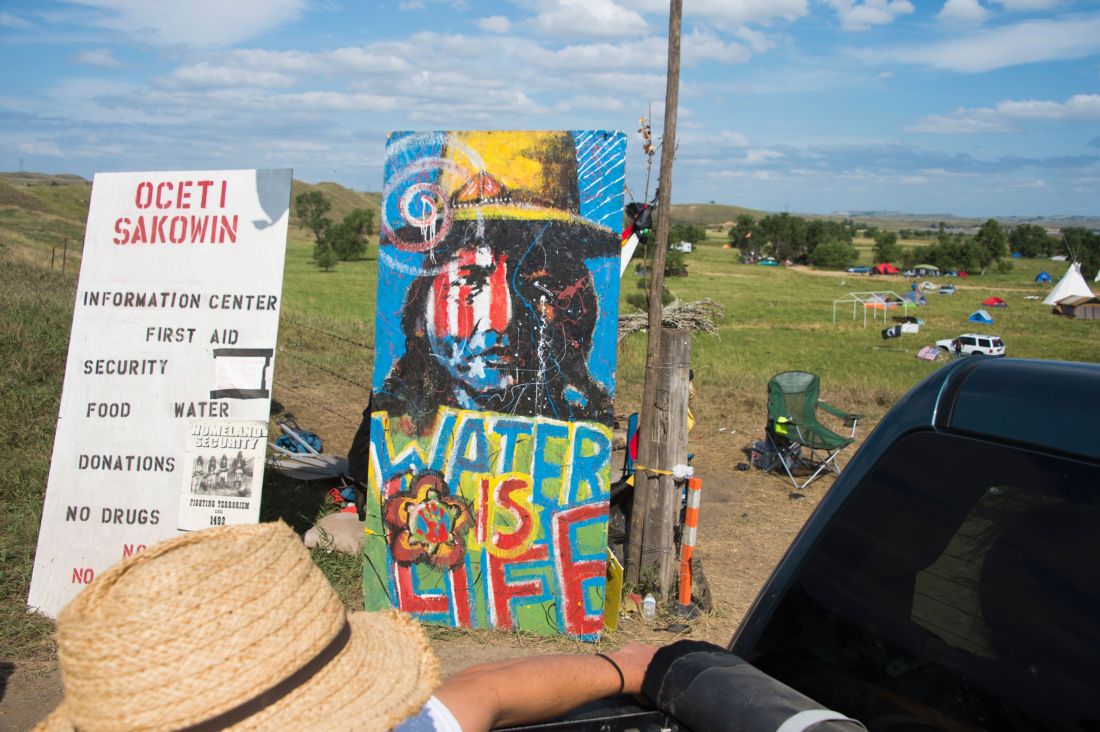 A sign welcomes visitors at the entrance to an oil pipeline protest encampment near Cannon Ball, North Dakota where members of the Standing Rock Sioux tribe and their supporters have gathered to voice their opposition to the Dakota Access Pipeline (DAPL), September 3, 2016. Drive on a state highway along the Missouri River, amid the rolling hills and wide prairies of North Dakota, and you'll come across a makeshift camp of Native Americans -- united by a common cause. Members of some 200 tribes have gathered here, many raising tribal flags that flap in the unforgiving wind. Some have been here since April, their numbers fluctuating between hundreds and thousands, in an unprecedented show of joint resistance to the nearly 1,200 mile-long Dakota Access oil pipeline. / AFP / Robyn BECK (Photo credit should read ROBYN BECK/AFP/Getty Images)
ROBYN BECK AFP/Getty Images

A growing group of indigenous people, climate activists and landowners have been protesting a 1,200-mile oil pipeline crossing North Dakota en route to the Gulf Coast since the project was first announced in 2014. But it was only this week, two years later, that the Dakota Access Pipeline bursted into the public consciousness as thousands of protesters gathered at the site and the Obama administration stepped in to halt construction.

Now, some environmental activists believe the Dakota Access Pipeline could be the next Keystone, a high-profile test battle in the longer term mission of activists to keep fossil fuels in the ground. And, while the Dakota pipeline protests feature the usual cast of environmental activists, the movement has captured attention in part because of the efforts of the indigenous people who say their own rights have been threatened.

“Tribal leaders and indigenous leaders have been talking about the need to keep fossil fuels in the ground for a long time,” says Lena Mofitt, director of the Sierra Club’s Dirty Fuels campaign. “It’s a natural partnership.”

The central issue for the Standing Rock Sioux, a tribe located less than a mile from the proposed pipeline, has been the threat it could pose to the local water supply. The pipeline would cross under a dammed section of the Missouri River that serves as a source of water for the tribe, and tribal leaders worry about the effects of an accident or spill. The project would also destroy a burial ground, they say.

But the concerns of the Standing Rock Sioux represent just the tip of the complaints that have galvanized the thousands of activists, many of whom are indigenous people, who have shown up to protest. Indigenous activists from across the country say their communities are all too familiar with large infrastructure projects that wreak environmental havoc in their backyards without their approval. The Dakota Access Pipeline is an opportunity to bring attention to the broader issues facing their communities.

Beyond that, protestors say they are concerned about the contribution of the pipeline—and the oil it would soon carry—to man-made climate change. Many indigenous communities will be the first to experience the devastations of climate change, while doing little contribute to the problem.

“Indigenous people—we seem to have a solid sense of what sustainable stewardship looks like,” says Dallas Goldtooth of the Indigenous Environmental Network, speaking after a rally in Bismarck, N.D. “The fight against the Dakota Access Pipeline is just the natural evolution of the climate justice movement.”

What seemed likely to be a futile effort just a few months ago gained significant traction on Friday as the Department of Justice, the U.S. Army and the Department of the Interior ordered a halt to construction while officials reconsider the approval process. The move by the government came immediately after a federal judge had denied the Standing Rock Sioux’s to temporarily block construction of the pipeline. The government statement also acknowledged the top activist concerns and called for consideration of “nationwide reform with respect to considering tribes’ views” for future projects.

The recognition that the government may not have adequately taken tribes’ considerations into account is a significant achievement, but the decision by the Obama administration is far from definitive. In the meantime, the activists on the ground say they have no plans to move.

“We are in this for the long run,” says Goldtooth, “whether it’s snow, rain or hail.”