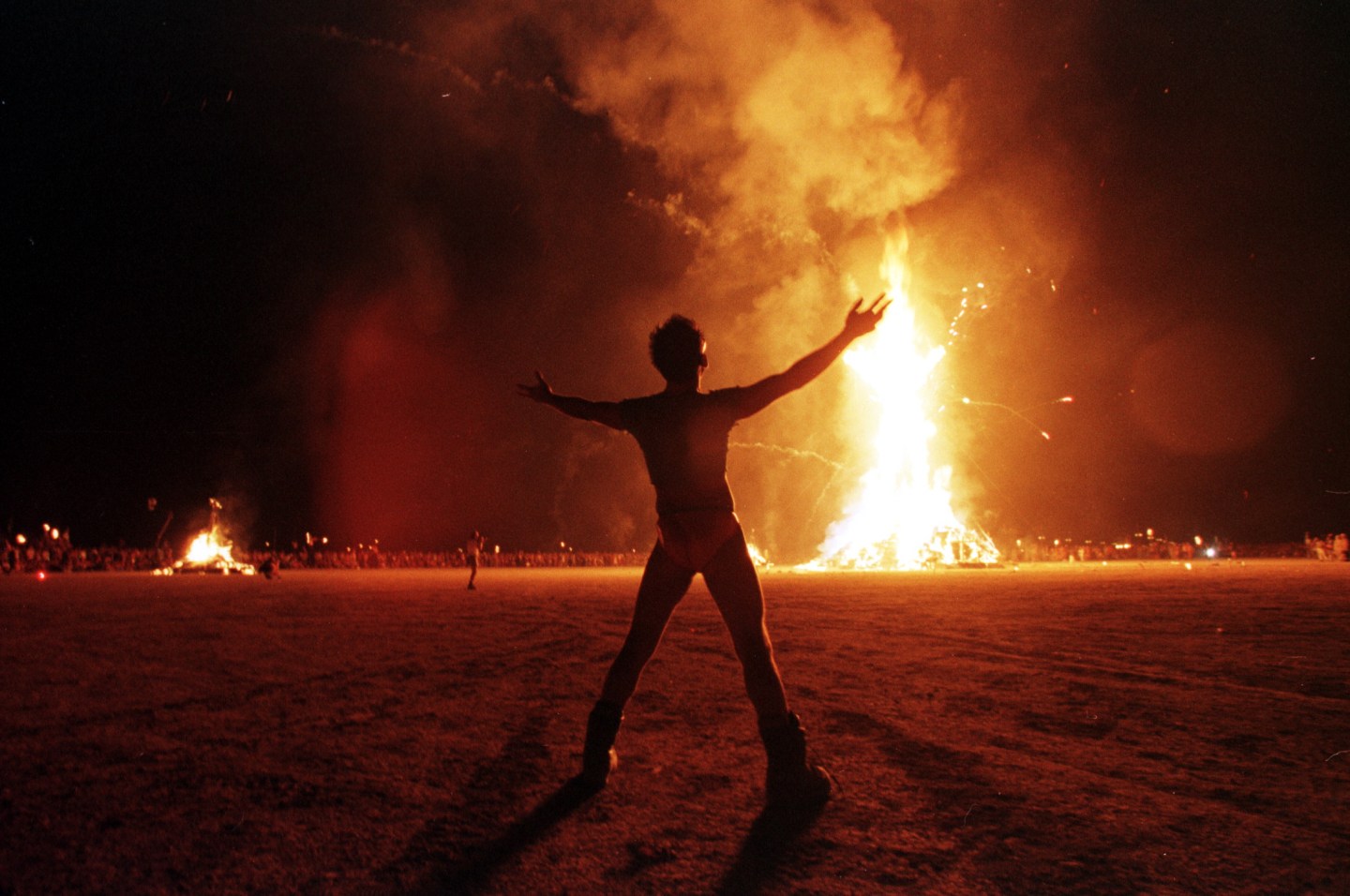 BLACK ROCK DESERT, UNITED STATES: A "Burning Man" participant holds up his arms as the wooden man effigy is burned at the conclusion of the week-long "Burning Man Festival" 06 September in the Black Rock Desert in the northwestern part of the state of Nevada. More than 15,000 people congregated at this man-made town in the desert to celebrate radical, creative self-expression.
Photograph by Mike Nelson—AFP/Getty Images

A group of alleged vandals raided one of the Nevada desert’s most popular annual Burning Man parties on Wednesday, apparently for reasons that have an elite group of festival goers burning mad.

The San Francisco Chronicle yesterday reported the suspected sabotage that occurred during a party at Burning Man’s White Ocean camp on Wednesday may have been committed by a group of anti-rich partygoers upset about their upscale neighbors.

White Ocean organizers called it “something we thought would never be possible in OUR Burning Man utopia.”

“This year has been quite the challenge for our camp,” the organizers wrote on Facebook. “Last night’s chain of events was an absolute and definitive confirmation that some feel we are not deserving of Burning Man.”

The Burning Man festival was founded in 1986 on a San Francisco beach. The party moved to the Nevada desert between 1989 and 1990.

White Ocean is one of many Burning Man “plug and play” parties that have spawned in recent years, founded in 2013 by DJ Paul Oakenfold. It’s financed by Ocean Group entrepreneurs Timur Sardarov (whose father, Rashid, is a Russian billionaire) and fellow Ocean Group founder Oliver Ripley, according to the Chronicle.

Organizers expressed on Facebook that their group was targeted for catering to elites even though they help pay the bills that make Burning Man possible. They put out a call for unity with their fellow festival goers, letting them know all were apparently welcome to attend.

“We provide one of the most state of the art stages on the playa and feed hundreds of non white ocean burners a day,” organizers wrote on Facebook. “Does this qualify as a non-welcoming camp with no contribution to Burning Man?”

It’s not the first time class warfare has come to Burning Man. Burning Man 2015 saw similar discussions crop up around a billionaire-funded Camp Caravancicle that according to Bloomberg was meant to “feel something like staying at a pop-up W Hotel.” As the classic rave festival continues to attract the Silicon Valley set, it struggles to balance its original ethos of decommodification and gifting with the splendor associated with the festival’s deep pocketed party-goers.

“We will absolutely not let this pathetic violation stop what we came here to do,” the White Ocean organizers said in their post. “We came here to unite people through music and love… Please join us at our White Ocean stage and help us celebrate life through music. In doing so together, we can make these foolish acts of hate as minuscule as a particle of dust on our beloved playa.”