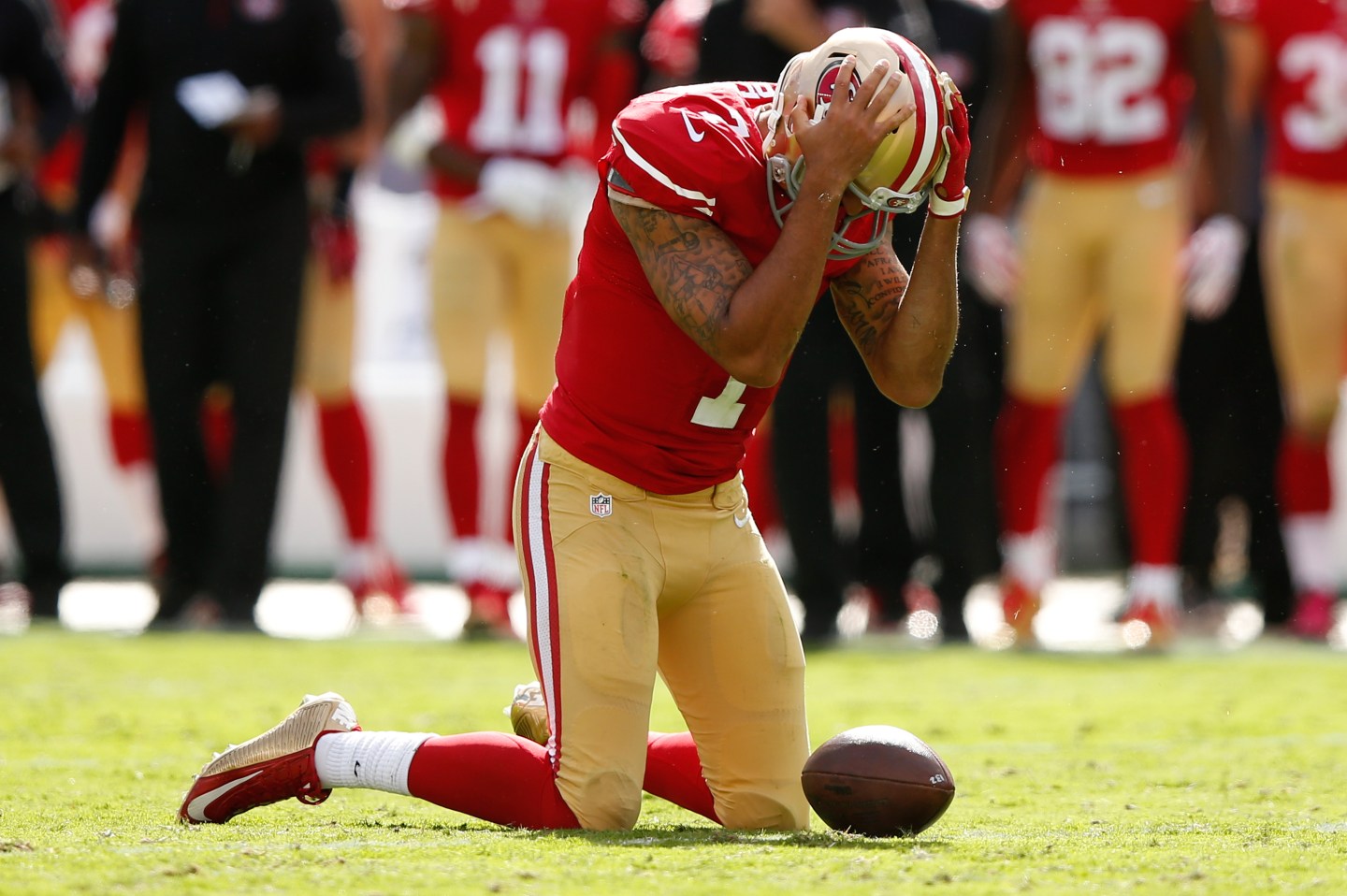 during their NFL game at Levi's Stadium on October 18, 2015 in Santa Clara, California.
Photograph by Ezra Shaw—Getty Images

San Francisco 49ers quarterback Colin Kaepernick knelt with his arms folded during the performance of the U.S. national anthem during a pre-season game in San Diego on Thursday, continuing his protest against racial injustice and police brutality.

Kaepernick, 28, had pledged to continue sitting during the performance of “The Star-Spangled Banner” before National Football League games, a move that has been both criticized and cheered by commentators.

He was met by heavy boos from the crowd during pre-game warm-ups and during his first offensive drive at Qualcomm Stadium in San Diego, which is home to many U.S. Navy and Marine bases.

The game coincided with “Salute the Military Night,” which saw 240 sailors, Marines and soldiers present a U.S. flag and a pre-game parachute jump by retired Navy SEALS.

Kaepernick has said his protest is not aimed at the military, but some view his refusal to stand for the anthem as disrespectful to the armed forces. Kaepernick applauded from the sidelines during a second-quarter salute to military members.

One of his teammates, safety Eric Reid, knelt alongside the quarterback during the singing. Seattle Seahawks cornerback Jeremy Lane also sat during the playing of the national anthem before his pre-season game in Oakland, media have reported, although his motivation was not clear.

Kaepernick, who led San Francisco to the 2013 Super Bowl but has since been demoted to backup, has said he would not show pride in the flag of a country that oppresses people of color, citing police brutality.

The use of force by police against African-Americans in cities such as Baltimore, New York, and Ferguson, Missouri, has sparked periodic and sometimes destructive protests in the past two years and prompted the rise of the Black Lives Matter movement.

The 49ers, who unsuccessfully tried to trade Kaepernick since his demotion, have supported his protest, as have many others, including NFL Hall of Fame running back Jim Brown and National Basketball Association legend Kareem Abdul-Jabbar.

But the demonstration has also drawn fierce criticism from a wide range of people, including the San Francisco Police Officer’s Association, which, in a statement, called him “misinformed” and demanded an apology.

In a City of Unsolved Murders, Freddie Gray’s is Now One More

Photos on sports websites and Twitter on Thursday showed Kaepernick wearing socks patterned with images of pigs in what appear to be police hats. News media reports indicated the photos were taken in mid-August but the images sparked criticism from some social media users.

Kaepernick said in a statement posted to his Instagram page he has relatives and friends who are police officers and he had worn the socks in the past to call attention to “rogue cops.”

Two seasons ago, players on the NFL’s St. Louis Rams entered the stadium for a home game with their hands raised, a reference to the “Hands Up, Don’t Shoot” slogan adopted by protesters in demonstrations against the shooting of an unarmed black teenager in nearby Ferguson.