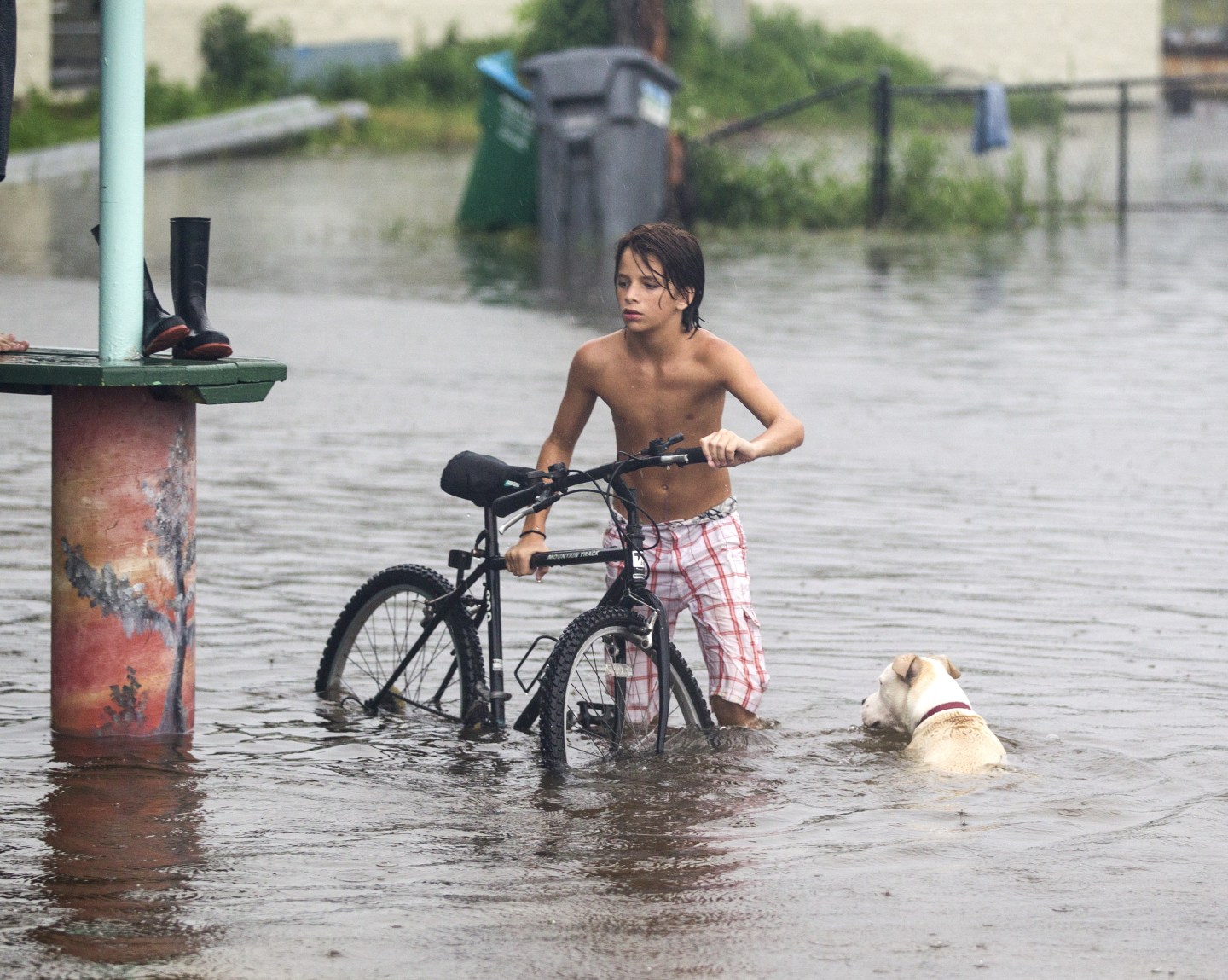 SAINT MARKS, FL - SEPTEMBER 01: A young man and his dog wades in the storm surge from Hurricane Hermaine outside Cooter Stew Cafe on September 1, 2016 in Saint Marks, Florida. Hurricane warnings have been issued for parts of Florida's Gulf Coast as Hermine is expected to make landfall as a Category 1 hurricane (Photo by Mark Wallheiser/Getty Images)
Mark Wallheiser/Getty Images

Tropical Storm Hermine plowed across North Carolina’s Outer Banks on Saturday, threatening the U.S. East Coast with a mix of high winds and heavy rain after leaving a path of destruction in Florida, Georgia and in the Carolinas.

The storm was projected to creep north along the Carolina coast, then gather strength after moving offshore into the Atlantic, possibly reaching near-hurricane intensity by late Sunday, the National Hurricane Center said.

Labor Day weekend plans for thousands of vacationers who were headed to popular beach spots along the Atlantic seaboard were dampened after the storm battered Florida’s $89 billion tourism industry.

The threat of severe weather caused officials in Atlantic City, New Jersey, to cancel concerts over the weekend, and beaches were closed in several coastal communities.

At 5 a.m. EDT, the center of the fourth named storm of the 2016 Atlantic hurricane season was near the northern Outer Banks of North Carolina, with top winds near 60 miles per hour (95 kilometers per hour), the hurricane center said.

After heading east-northeast into the open ocean, the storm is expected to head north and be off the Middle Atlantic’s Delmarva Peninsula late on Saturday and on Sunday, it said.

Hermine, the first hurricane to make landfall in Florida in 11 years, swept ashore early on Friday near the Gulf shore town of St. Marks, packing winds of 80 mph (130 kph) and churning up a devastating storm surge in coastal areas.

Authorities reported one storm-related death in the northern Florida town of Ocala, where a falling tree killed a homeless man sleeping in his tent.

A total of about 150,000 households were without power in Florida, Georgia and the Carolinas, utility companies reported on Saturday.

Emergency declarations remained in effect for all or parts of Florida, Georgia, North Carolina, Virginia and Maryland.

Overnight, crews in Pasco County, Florida, rescued more than a dozen people after their homes were flooded.

Richard Jewett, 68, was rescued from his home in New Port Richey, just north of Tampa, as emergency teams carried out a mandatory evacuation.

“The canal started creeping up toward the house, and even though it wasn’t high tide it looked like it was coming inside,” Jewett said.

In addition to powerful winds extending up to 185 miles (295 km) from its center, Hermine was expected to unleash a dangerous storm surge in the Hampton Roads area of tidewater Virginia, the NHC warned.

2 Dead and More Than 1,000 Rescued as ‘Unprecedented’ Floods Hit Louisiana

The storm also could douse several southeastern and Middle Atlantic states with up to 15 inches (38 cm) of rain through Sunday, the agency said.

New Jersey was on high alert as emergency officials advised residents to prepare for flooding, high winds and a surge of seawater.

In Florida, concerns over the standing water in which mosquitoes breed intensified as the state battled an outbreak of the Zika virus.