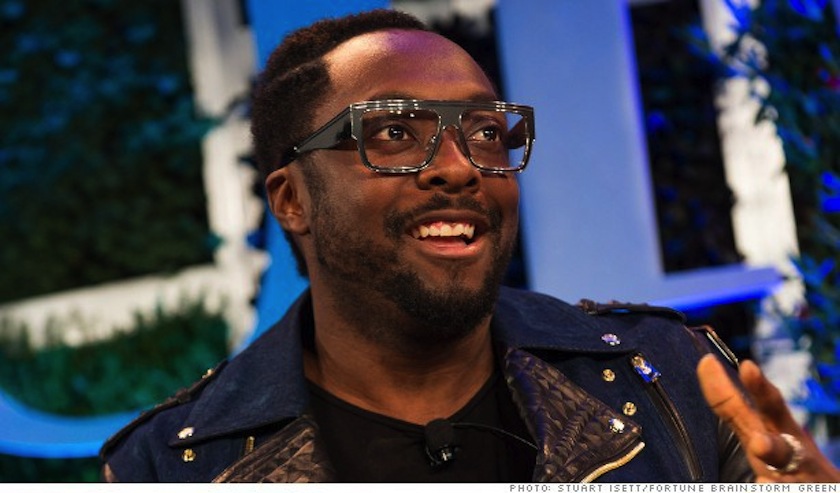 To music artist Will.i.am, technology can change the world.

On Tuesday, Will.i.am, the former Black Eyed Peas singer whose legal name is William Adams, dropped by the Apple Store in San Francisco’s Union Square for a screening of the music video for a new version of the group’s 2003 hit Where Is the Love? He was joined by Apple retail chief Angela Ahrendts, and discussed why the proceeds from the song would go toward education programs and initiatives through Adams’ i.am.angel foundation.

“What success would look like… In every inner city, third period—’where are you going?,’ I’m going to iOS class,” he told Ahrendts when asked about the ideal outcome of his efforts to improve education.

Adams pointed out that, unlike physical education, computer science isn’t a mandatory subject in schools, which he said seem to invest a lot more resources in sports.

“There’s a football field in every school,” he said. “Only one company benefits from that football field, that’s called the NFL,” he continued, adding that only men play for the National Football League.

Adams and fellow Black Eyed Peas bandmates Apl.de.ap and Taboo, who also attended the event, explained that they were inspired to produce a new version of their hit song by the slew of recent events in the U.S. and around the world, including police shootings and terrorist attacks. The band recorded the original version of Where Is the Love? following the Sept. 11. terrorist attack.

Adams has long been interested in education. In 2008, he met Laurene Powell Jobs, the widow of Apple co-founder Steve Jobs, and in 2012, the two partnered to expand Jobs’ College Track program to the Boyle Heights neighborhood of Los Angeles, where Adams grew up. College Track, founded in 1997, offers college guidance to students in disadvantaged neighborhoods.

Adams’ interest in technology has grown over the years. In 2011, Intel named him director of creative innovation, which includes contributing input in the company’s development of smartphones, laptops, and tablets. Two years later, he founded i.am+, a mobile accessories company that has developed a smartwatch and wireless earphones.

On a personal note, Adams shared he used Apple IIc computers when he was a young student, sparking his longstanding appreciation for Apple (AAPL).