Anyone Can Invest Like a VC Now—So Why Aren’t They? 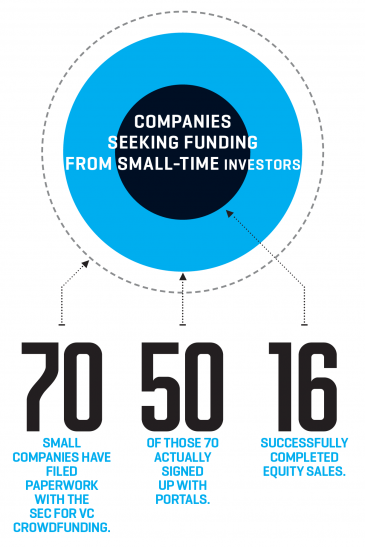 In just a few short weeks, Taxa, a San Francisco startup that makes genetically modified, glow-in-the-dark plants, raised $270,000—not from the usual coterie of slick, deep-pocketed venture capitalists but from 450 retail investors.

That was possible thanks to the JOBS Act of 2012, which included a measure permitting investors with less than $1 million in liquid assets and who earn less than $200,000 annually to buy small amounts of equity in startups. The change was finally enacted by the Securities and Exchange Commission in May, marking the first time unaccredited investors could purchase equity in private companies via public solicitations in 80 years.

But the change didn’t exactly unleash decades of pent-up demand. So far only about 70 small businesses have filed with the SEC to sell shares; 50 signed up with the SEC-approved portals that investors are required to use, and just 16 successfully completed equity sales—worth about $4.6 million, according to Wefunder, which has facilitated about 80% of successful sales, including Taxa’s.

For more on VC, watch this Fortune video:

Why not? Part of the reason is it’s more complex than other ways of raising money. Another part is the $1 million cap on the raises, which may be too small given the complexity and relative expense of the registration process with the SEC, although a “fix crowdfunding” bill pending in Congress may alleviate some of those problems soon. Plus, most businesses and investors don’t even know equity crowdfunding is an option, says Georgia Quinn, of counsel with Ellenoff, Grossman & Schole, and a securities law expert.

Of course, given the frequently treacherous startup atmosphere for obtaining capital, that might not be such a bad thing. Still, Wefunder and others hope equity crowdfunding catch on with the masses eventually. “It’s like a ball rolling down hill,” Nick Tommarello, co-founder and chief executive of Wefunder, says of the slow uptake. Quirky GMO houseplant companies, rejoice.

Read More: The VC Who Passed on Tesla in 2006 Says It ‘Stings Every Day’

A version of this article appears in the September 1, 2016 issue of Fortune with the headline “Joe Public Investors Can Act Like VCs Now. Why Aren’t They?”