6 Reasons Why Obama Is Wrong About Obamacare 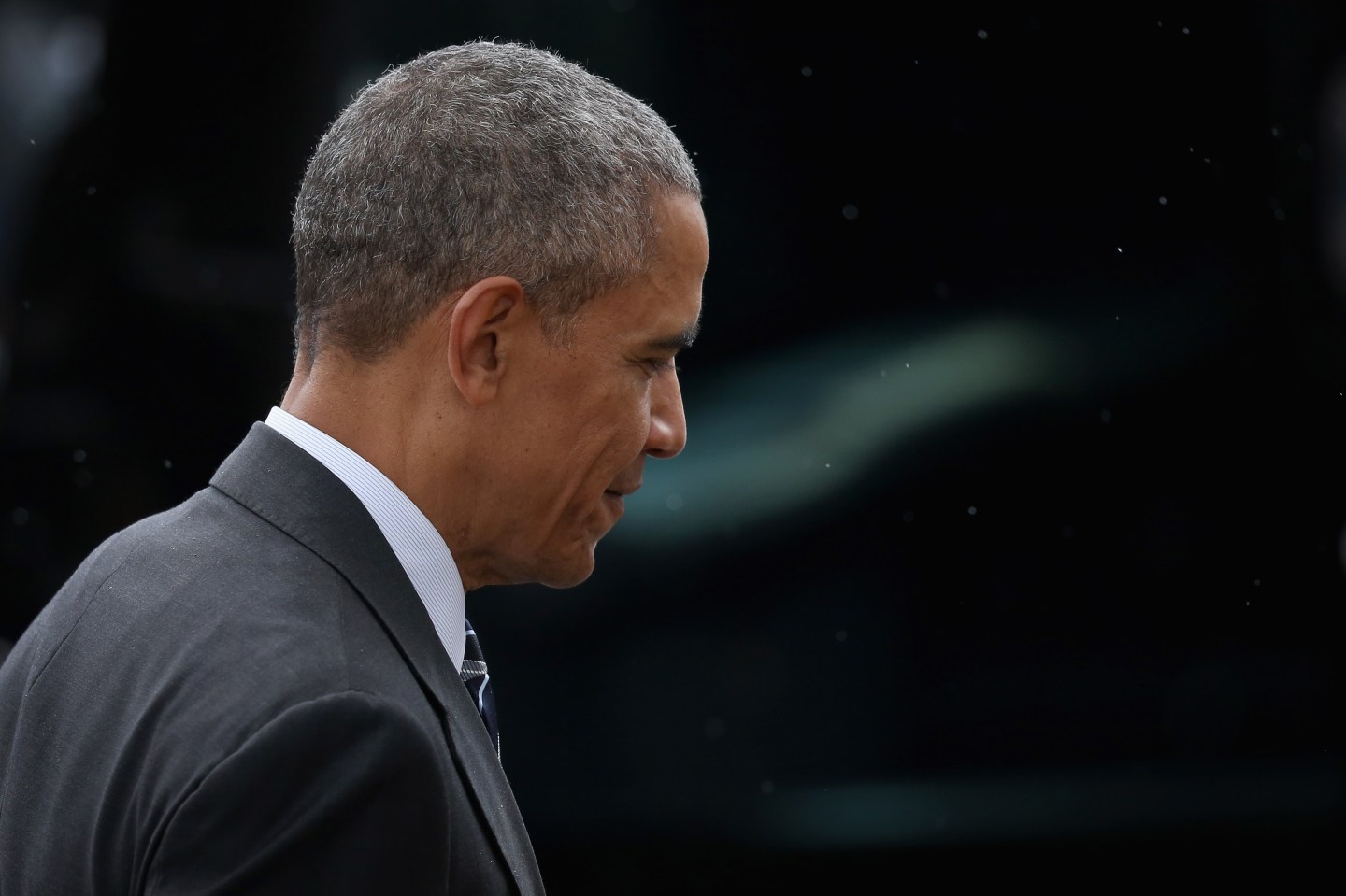 LONDON, ENGLAND - APRIL 24: US President Barack Obama departs Stansted Airport after a four day visit to the UK, on April 24, 2016 in London, England. Mr Obama is to visit Hanover in Germany to hold talks with German Chancellor Angela Merkel before returning to the US. (Photo by Dan Kitwood/Getty Images)
Photograph by Dan Kitwood via Getty Images

On August 2, an extraordinary editorial appeared on the website of the scholarly Journal of the American Medical Association, a one-of-a-kind article by the President of the United States defending his signature accomplishment. In “United States Health Care Reform, Progress and Next Steps,” Barack Obama spends around 4,000 words gamely defending Obamacare. In the JAMA article, the POTUS asserts that the Affordable Care, signed on March 23, 2010, has “succeeded by sharply increasing insurance coverage” and created “a sustained period of slow growth in health care spending.” Obama also acknowledges that “the work is not over,” and that the US needs to raise subsidies to make costly policies for middle class families far more affordable. He also advocates a “public option” in areas where consumers have few choices in purchasing insurance.

In short, the father of Obamacare thinks his favorite child is an over achiever in need of just a few extra credit projects before being graded a star student. Congrats!

On Monday, however, the National Bureau of Economic Research published a study that found Obamacare had not made switching jobs any easier for workers, as some had promised. And it is far from the only slightly more objective study that has concluded that Obama’s golden child is less shiny than the president promises.

In fact, in the same issue of JAMA in Obama’s defense of the health act was published was another far more critical analysis of Obamacare by Stuart Butler, a senior fellow in economic studies at the Brookings Institution. Brookings describes itself at “non-partisan” and “independent,” though it’s frequently regarded as slightly left-leaning. In any case, while Butler praised the law for bringing coverage to millions of uninsured Americans, he concludes that the “most fundamental aspects need to be rethought.” Butler’s point: The law’s main legacy is raising enrollment in Medicaid, not drawing Americans to the health care exchanges that were supposed to emerge dominant. Has Obamacare really tamed previously fast-rising costs for years to come? Butler concludes that the president’s grandiose claim is probably wrong.

Let’s forget ideology and examine what we really know about Obamacare’s successes, failures, and what it promises for the future. Drawing from Butler’s critique and an exhaustive study of the federal spending on health insurance published by the CBO in March, I’ve come up with my own conclusion, which I have titled, “Six Issues that Tell the Real Story of Obamacare.” I’m sure a scholarly journal will pick it up soon. Until then you can read my six reason Obama was so wrong about Obamacare below.

1. The growth in Obamacare’s exchanges has actually been pretty disappointing.

“The Affordable Care Plan might better be called the Medicaid Expansion Act,” says Butler. “We’ve seen a large reduction in the uninsured, but not in the way intended.” Traditionally, Medicaid provided health coverage for families earning incomes at or below the poverty line as defined each year by HHS. Then, as now, it’s administered by the states, and it’s funded jointly by the states and the federal government. Under Obamacare, the poverty threshold was raised substantially so that millions more uninsured, lower-income folks could get coverage under Medicaid. But the law was not-so-carefully structured to make sure the vast majority of the ACA enrollees entered the highly competitive exchanges, and that those who newly joined Medicaid would smoothly shift to the mainstream Obamacare as their incomes rose.

It isn’t turning out that way. The growth in Medicaid enrollees has been explosive. That phenomenon has emerged as the most striking feature of the entire law. For 2015, the CBO forecast that 2 million people would enroll in Medicaid under the ACA. The actual number was 100% higher, at 4 million. All told, eleven million Americans are now newly-covered by Medicaid under Obamacare, 18% of the total of 62 million enrollees, and the number will swell to 15 million or 22% by 2026.

Why is that a problem? Medicaid is already menacing future budgets because of rapidly escalating costs. Under the ACA, the federal government pays more of each patient’s costs, and the states pay less, than under the regular program. Rich federal grants were the inducement that lured 31 states to offer Medicaid under the ACA. (Nineteen states haven’t made that step, but the CBO predicts that most of the holdouts eventually will offer the program.) Most of all, the exchanges are what Obamacare is all about: Private insurers vying for customers by offering lots of choice and bargain prices.

By contrast, Medicaid does provide private HMO and other plans, but the prices and coverage are all governed by state regulators. Flocking to Medicaid swells an existing entitlement. It’s the antithesis of a market-based plan. It does nothing to make our medical system more competitive and dynamic.

2. Obamacare Plans are too expensive for the middle class.

The ACA’s healthcare exchanges were supposed to offer private plans that middle-income families could both afford and get the kind of broad coverage usually offered by employers. The policies are a good deal for families just over the ACA’s Medicaid poverty level. For them, the premiums are paid by federal subsidies.

But middle-income families are being forced to pay a lot, if not most, of the premiums themselves. They are not just expensive, they are overpriced for what you get, says Butler. “As a result, middle-class families are choosing the lowest-cost ‘bronze’ policies that mainly cover catastrophic care, and most other expenses are paid by the patients through high deductibles.”

The high costs render the plans a lot less attractive than Obamacare’s authors envisioned. As a result, enrollment is well below the original projections. Today, just 12 million families are enrolled in the exchanges, and the number is projected to peak at 19 million around 2020, then stay flat for a few years before declining in 2025. Keep in mind that in 2026, Medicaid ACA plans will encompass a projected 15 million, or over 80% the enrollment in the exchanges.

3. Without improvement, the ACA won’t solve the problem of the uninsured.

To be sure, Obamacare has sharply increased the ranks of Americans with health care coverage. From its enactment in 2010 through 2015, the ACA lowered the number of uninsured to 26 million from 49 million. But according to the CBO, the number of uninsured will actually increase to around 28 million by 2026, and remain steady at approximately 10% of the U.S. population under 65. The reason: The high cost of those exchange plans means that folks will keep shunning them—unless future presidents substantially raise subsidies, a big challenge for future federal budgets.

Contrary to the bluebird outlook that Obama advanced in his JAMA piece, the CBO projects a rapid escalation in government-paid and subsidized health care costs in the coming decade. It’s true that over the past several years, the curve has been ascending in the low-single digits. But that may be the legacy of the financial crisis, and, according to the CBO, won’t last. The agency projects that from this year through 2026, the amount the federal government spends on coverage for Americans under age 65 will grow from $660 billion annually to $1.1 trillion, or 5.4% a year. Their share of national income will swell from 3.4% to 4.1%.

Of that cumulative $8.9 trillion in spending, subsidies through the exchanges and costs of ACA Medicaid plan will account for $1.9 trillion, or 21%. That’s $1.9 trillion in new programs that didn’t exist a few years ago.

ACA spending has already done great service in protecting the uninsured. But in an era where we’re facing $1 trillion deficits as early as 2020—a freakout number—our leaders shouldn’t assume that we’ve tamed the once explosive trend in health care costs of government-paid health care.

5. The public option is back.

In his article, Obama asks Congress to allow states to provide a Medicare-like “public option” in areas where two or fewer insurers offer coverage, and hence competition isn’t sufficiently robust. That plank was a pillar of several of the early Obamacare proposals, but didn’t make the final law. “It would be a mistake,” Butler told Fortune. “It’s the government, which runs the exchanges, competing against private companies. It’s as if the umpire owns one of the baseball teams. Who do you think is going to win?”

He’s right. Aetna (AET), UnitedHealth Group (UNH), and other insurers are already exiting state exchanges. The idea that a public option exists and may spread would make it a lot more likely others would leave, and discourage new insurers from entering the market.

Surprisingly, the ACA contains a radical proposal that, though it’s mostly overlooked, could reshape the future of U.S. health care. It’s a provision called “1332” that starting in 2017 allows states to request waivers allowing them to exit Obamacare if they can meet its requirements for coverage and out-of-pocket costs to consumers. “States liked the provision for totally different reasons,” says Butler. “Vermont wanted the freedom to eventually have a public option. Senator Ron Wyden thought that if Oregon could get the money the federal government pays for its programs, the state could find better ways to provide them, and Texas was interested in a free-market solution giving people vouchers to pay for their own care.”

The Obama Administration, however, has been less than enthusiastic about 1332. It’s long-delayed issuing guidelines that would let the states qualify for the waivers, and made the technical requirements for spending Washington’s money their own way highly complex. The resistance is clearly part of an effort to shield Obamacare while it’s still fragile.

We’ll see if the next president clears the roadblocks and encourages the states to seek waivers. If that happens, the kind of creativity and innovation that drives the rest of the U.S. economy might finally galvanize health care. Despite what the president says, Obamacare isn’t a success yet, and will need a lot more than tweaks to become the triumph he’s selling.